Butterfly Center to Lose 70% Of Sanctuary To Border Wall

The bulldozers have roared onto what is usually a peaceful oasis of beauty.  The National Butterfly Center in Mission, Texas, stands to lose over 70% of their 100 acres of private conservation land to construction of a wall separating Mexico from the United States. 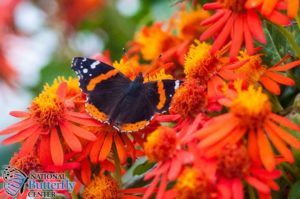 The Center, located in Texas’ Lower Rio Grande Valley, is the ideal spot for more than 300 species of butterflies.  It is open year-round, drawing multitudes of visitors, hobbyists and schoolkids.  The Center is a project of the nonprofit North American Butterfly Association.  In 2014, an ordinance by the Mission city council established the conservation area, which included,

‘Penalties for capturing, taking or killing wild, free-flying butterflies or any stage of their life cycle.’

The Center collaborates with the National Park Service in protecting the butterflies. U.S. Fish & Wildlife are also partners; in 2011 they planted 12,000 plugs of rare grasses and endangered wildflowers.  Protected species like the Texas Tortoise, 400 varieties of birds and the endangered Monarch butterfly, who migrates through the Valley, all coexist in this designated conservation area.

NBC officials fear that construction of the border wall through this delicate ecosystem will negatively impact all area flora and fauna.  In addition, the financial hit to the area will be tremendous, should the sanctuary be cut to pieces — environmental tourism contributes more than $450 million to Hidalgo and Starr counties. 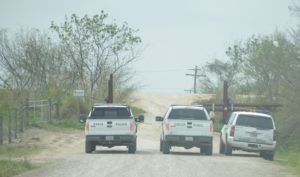 Surveyor stakes, along with chainsaws and heavy equipment, first appeared on the property in July 2017, without notice or permission from property owners, and delineated the ‘clearing zone’ where the work would begin.  As recently as December, 2018, U.S. Customs and Border Protection assured concerned staff that the wall would not impede access to the Center and that any construction would not actually begin until February or March.  On February 3, 2019, again without notice and less than 60 days after initial assurances from the government, the first excavators have rolled in.

NBC staffers have been informed that they will no longer have access to their own land, south of the levee, where six miles of wall is planned to be erected.   Seventy percent of the National Butterfly Center lies south of that levee.  Per Center officials, 12 Border Patrol agents arrived this week, informing them ‘they were there to advance their client’s agenda.‘  NBC were also notified that the Mission Police Department,

‘Have orders to prohibit anyone from stepping foot on the levee, which sits on our private property.’ 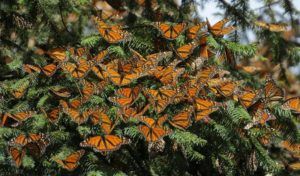 In the past, construction of a barrier between the U.S. and Mexico resulted in land being appropriated by the U.S. government and Department of Homeland Security, many times without proper compensation.  Land was taken without identifying the rightful owners.  Varying amounts of payment were made, with the largest sums usually awarded to wealthier landowners who could afford to pay for better legal representation.

Evidence has shown that DHS abused their power in many of these cases.  If the owners refused to sell, the US government would simply take the property, filing hundreds of eminent domain lawsuits to take thousands of acres of land in the border states of Arizona, California, New Mexico and Texas.  In 2017, money was appropriated by the Senate for some sort of barrier to be constructed in the area, to the tune of $1.6 billion.  But that is for construction, not for property owner compensation. 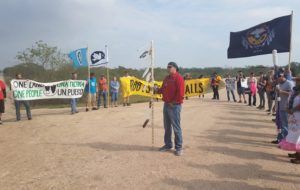 The Center will be filing further restraining orders to block construction of the wall system through their land.  A number of groups and individuals are currently on site at the Center, including the Carrizo/Comecrudo Tribe of Texas and the Society of Native Nations.  They have united in protest against the advancement of equipment onto this privately owned conservation area.  A fundraiser has been established to help with legal expenses in this fight.

According to a 2018 study, the Western monarch butterfly population in California has dropped by 86% in just one year.  Butterflies have migratory patterns, and any sort of disruption in their lives, such as bulldozing their habitat, might very well push the species off the cliff entirely.

The immediacy of the situation speaks volumes to the ‘butterfly effect’ of chaos theory.  When a butterfly flaps its wings, the repercussions are felt around the world.  The ripple effect of destroying the habitat of hundreds of butterflies, and other species who dwell in this region, may well be experienced for years to come.