British Trophy Hunters Slaughter Up to 100 Endangered Puffins Per ‘Tour’ 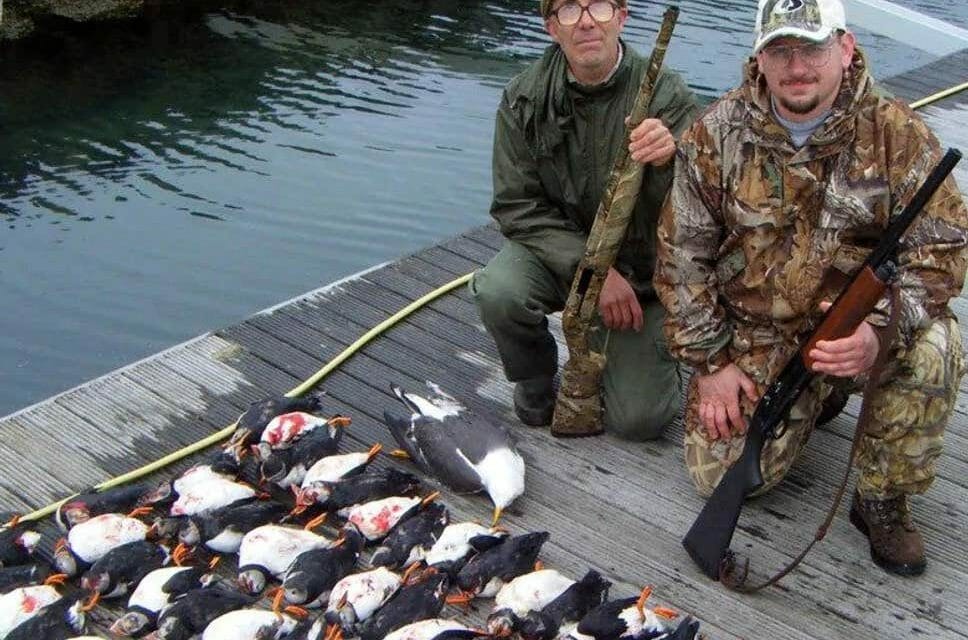 As many as 100 puffins — an endangered species — are slaughtered in each deadly trip British trophy hunters make to Iceland.

The merciless hunters are paying as much as £3,000 ($3,650) per tour to shoot the birds — which are protected in the UK, but not in Iceland — and take their dead bodies back to the UK as “trophies.”

Companies are advertising these mass culling expeditions online with images of gun-toting hunters gloating over the bloody, lifeless bodies of scores of massacred puffins.

In recent years, puffin numbers in Iceland have fallen from around seven million to 5.4 million, and the International Union for Conservation of Nature now lists them as “vulnerable,” indicating they are at substantial risk of extinction.

Campaigners and MPs are asking UK Environment Secretary Theresa Villiers to prohibit imports of puffins slaughtered by trophy hunters and urging global animal trade organization CITES to classify these birds as a protected species at its forthcoming conference in August.

“The puffin is now in danger of becoming extinct, and uncontrolled hunting has been identified as a leading cause,” says Eduardo Gonçalves from the Campaign to Ban Trophy Hunting. “There should be an immediate moratorium imposed before it is too late.”

CITES keeps no data on how many puffins are shot for recreation or traded, he notes, adding, “It is incredible that such an iconic species has been forgotten by the international community.”

“Puffins are one of the nation’s most iconic seabirds and, as with all wildlife, their protection is a high priority for this government,” comments a spokesperson for the Department for Environment, Farming and Rural Affairs in the UK. “We take the conservation of species seriously and work with organisations such as CITES to agree [to] tough global guidelines to protect animals at risk.”

You can help by emailing CITES at [email protected], urging it into action to save puffins and other animals from extinction at the hands of trophy hunters. Use the following sample letter as a guide, but please try to phrase the email in your own words:

I am writing to ask that puffins and giraffes be included on the CITES Appendices at CoP18. Neither of them are currently CITES-listed, yet both are seeing declines in populations and both are hunted virtually without restriction by trophy hunters.

I am further writing to ask that there be an immediate moratorium on all trade in Appendix I species. Trophy hunters are shooting large numbers of some of the most threatened species on the planet, yet trophy hunting is considered a non-commercial activity, meaning that the prohibition on trade of Appendix I species does not apply. The trade in hunting trophies should be treated in the same manner as all other trade in wildlife.

Additionally, please sign this petition asking Ivonne Higuero, Secretary General of CITES, to list puffins as a protected species and help put a stop to the drastic decline of these iconic birds.