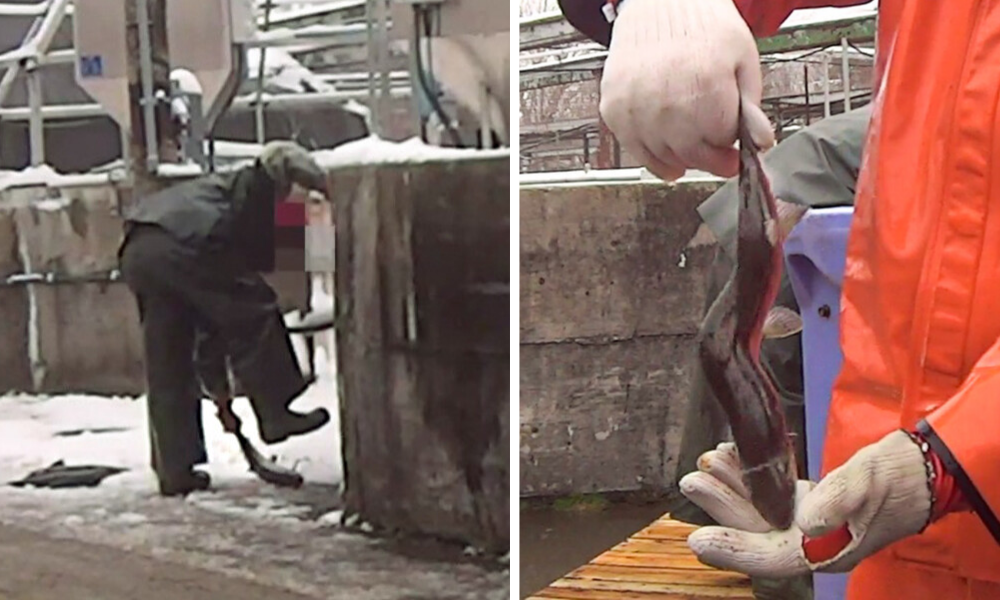 Compassion Over Killing has just released a horrific undercover video shedding light on the cruel treatment of fish and filthy living conditions at a Cooke Aquaculture hatchery.

The footage of the salmon farm reveals appalling animal cruelty committed by workers, who slam fish to the ground or stomp on them in an attempt to kill them, toss them roughly, and leave them to suffocate in piles.

COK’s investigation also reveals the disgusting conditions the fish are forced to endure.

“Fungus ate away his face,” declares a worker holding a fish above the water.

The fish need vaccinations to prevent illness in the disease-ridden facility, and many show signs of spinal deformities and fungal growth. Some fish are so underfed that they eat the eyes of other fish, mistaking them for food.

This is nothing new for aquaculture. The industry claims to be a better alternative to overfished oceans, but cruelty is rampant. Due to the high-stress, crowded and foul conditions, farmed fish often don’t even survive long enough to be shipped to slaughter.

Contrary to popular belief, scientists agree that fish do experience pain. Yet in the aquaculture industry, the animals are often fully conscious during slaughter or otherwise die a slow, painful death as they bleed out or suffocate. Sometimes employees beat fish repeatedly or freeze them to death.

Maine’s Animal Welfare Program has opened an investigation of the Bingham facility after the release of this video. Still, few protections exist to save fish from suffering.

One way anyone can help: Leave fish off your plate and seek plant-based, cruelty free foods instead.