After spending weeks trapped in shallow waters, experts are hopeful that a young beluga whale will soon reunite with his pod in the Atlantic Ocean. This remarkable animal traveled by land, air and sea before rescuers finally freed him.

In recent weeks, the beluga was separated from his pod and drifted off-course. The whale was unfortunately trapped in the New Brunswick river for two weeks before being discovered and rescued. Sadly, the mammal’s skin was damaged, and grew thinner than is healthy for a beluga whale.

The rescue mission was a complex operation where Scientists with GREMM, a marine mammal research group based in Quebec, spent over three hours trying to guide the animal into a net. After multiple strategies, including throwing rocks nearby to lure him in, the team was finally able to maneuver the beluga onto a stretcher and transport him safely to shore.

Tonya Wimmers of the Marine Animal Response Society confirms that during the initial rescue process, the “animal didn’t get too stressed.” To ensure his well-being, the onsite vet accompanied the young whale on the airplane to give him doses of intravenous fluids.

After flying to Quebec and enduring a second short road trip, the whale was tagged with a tracking device. The young mammal was then released into the St. Lawrence river, which is protected by the federal Species at Risk Act due to its huge species diversity.

Since the young mammal’s release, tracking has proven difficult. The tag is programmed to signal when the whale reaches the ocean’s surface up to 250 times a day. However, in the first day, most of the transmissions were sent within a few hours.

Scientific director Robert Michaud said, “It is possible that the beluga, recovering from his adventure, spends a lot of time at rest, near the surface…The tag then could transmit all its signals within a few hours.” Scientists are hopeful that the young whale is well on its way to finding its pod.

Beluga whales are incredibly social animals who depend on each other for their very survival. They hunt together, migrate together and even help each other care for their young. For a beluga whale, staying with their pod is not only necessary but vital to their existence. Straying from their companions for extended amounts of time is potentially very dangerous: The young beluga found in the New Brunswick river had become malnourished and frail after only two weeks of separation.

While the exact reason for the young male’s pod separation is unknown, noise pollution is a likely culprit; The WWF explains that noise pollution from shipping, military activities and marine construction can interfere with the belugas communication and navigation, making individual belugas more likely to drift apart from their pod and become lost and vulnerable. Of course, the other most obvious threat to the beluga species is climate change. Like polar bears, beluga whales depend on sea ice to feed and to take shelter from predators like orca whales. The rapid decrease of ice in Artic has sadly left the beluga whale in peril.

The species gets its name from the color of its skin; Beluga means white in Russian, although beluga whales are born grey and only turn white in adulthood. Their ghostly figures shimmer beneath the ocean’s surface and they can dive up to an impressive 2,123 ft. 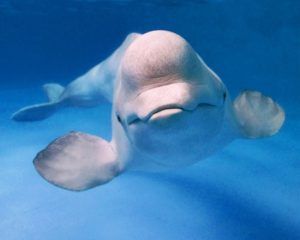 Beluga whales are not only a rare spectacle to behold, but a delight to hear; The beluga whale is possibly most famous for its loud vocalizations and is more commonly known as canary of the sea.  Their unique, high pitched ‘singing’ is so loud, they can be heard from “above the ocean’s surface by people on boats or onshore.” These mysterious, elegant creatures play an important role in maintaining a healthy ecosystem. It is crucial that we continue to help and protect such a magical and important species.

After being trapped for two weeks, the young beluga male now swims to a brighter future. If it weren’t for the compassion, precision and patience of all involved in the rescue mission, the young whale might not have survived. After a long and tiresome journey, the spectacular animal is well on his way to reuniting with his pod to feed, mate and live for many years to come.