Before and After: Tiny Rescue Dogs Make Amazing Transformation 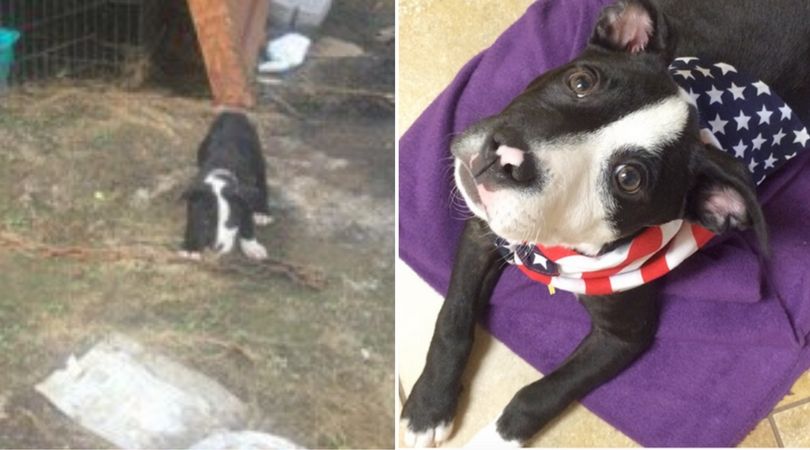 Andie was tied to a chain that weighed more than her, and suffered from severe mange. Ariel’s legs had become deformed from malnutrition.

But with the help of PETA rescuers, these two small dogs were given a second chance at life. And once their stories were shared online, both dogs found the loving forever homes they deserve.

When rescuers found Andie, she was tied to a cinder block among piles of trash in her owner’s backyard. Andie was tiny, weighing only 7 pounds. Andie’s owners surrendered the whimpering 10-week old puppy to the rescuers’ care because she had a highly contagious (and painful) form of mange.

“She was desperate for even an ounce of affection,” said Emily Allen, associate director of the Community Animal Project for PETA, in an interview with Lady Freethinker.

Ariel, suffering from severe malnutrition when she was found loose in a trailer park in North Carolina, was faring no better than Andie. Her rescuers say she weighed half of what she should have.

“Her fur was filthy and matted, and her front legs were deformed — a sign of severe malnutrition and prolonged neglect,” said Allen.

In severe cases of deformity from malnutrition, corrective surgery is sometimes needed. But Ariel was lucky.

“Thankfully, in her case, proper care and nutrition were all that she needed to heal,” said Allen.

While some people only think of larger breeds when imaging dogs tied up in backyards and suffering from neglect, even the tiniest dog can be a victim, as Ariel and Andie’s stories show.

But these two dogs have a happy ending, and are now experiencing kindness and compassion in their new homes.

“Andie is in great health. She loves playing with and giving kisses to her friends at the dog park, cuddling on the couch, and sleeping between her guardians on the bed every night,” said Allen. “Ariel is no longer a timid and skittish dog. Now, she runs up to greet everyone, loves jumping up on laps, and gives kisses and pecks on the nose.”