An Act of Dog artist Mark Barone describes his haunting, expressive, and evocative collection of dog portraits as “Art to stir the conscience of our nation for the emergence of a compassionate generation.”

Barone embarked on his project of painting 5,500 euthanized dogs — representing the 5,500 killed each day in shelters — after learning of the abominable number of homeless companion animals put to sleep daily. He immersed himself into creating a memorial by painting ten dogs a day, seven days a week, and often twelve or more hours per day. The magnificent result is an imposing, impressive, and emotionally charged collection. 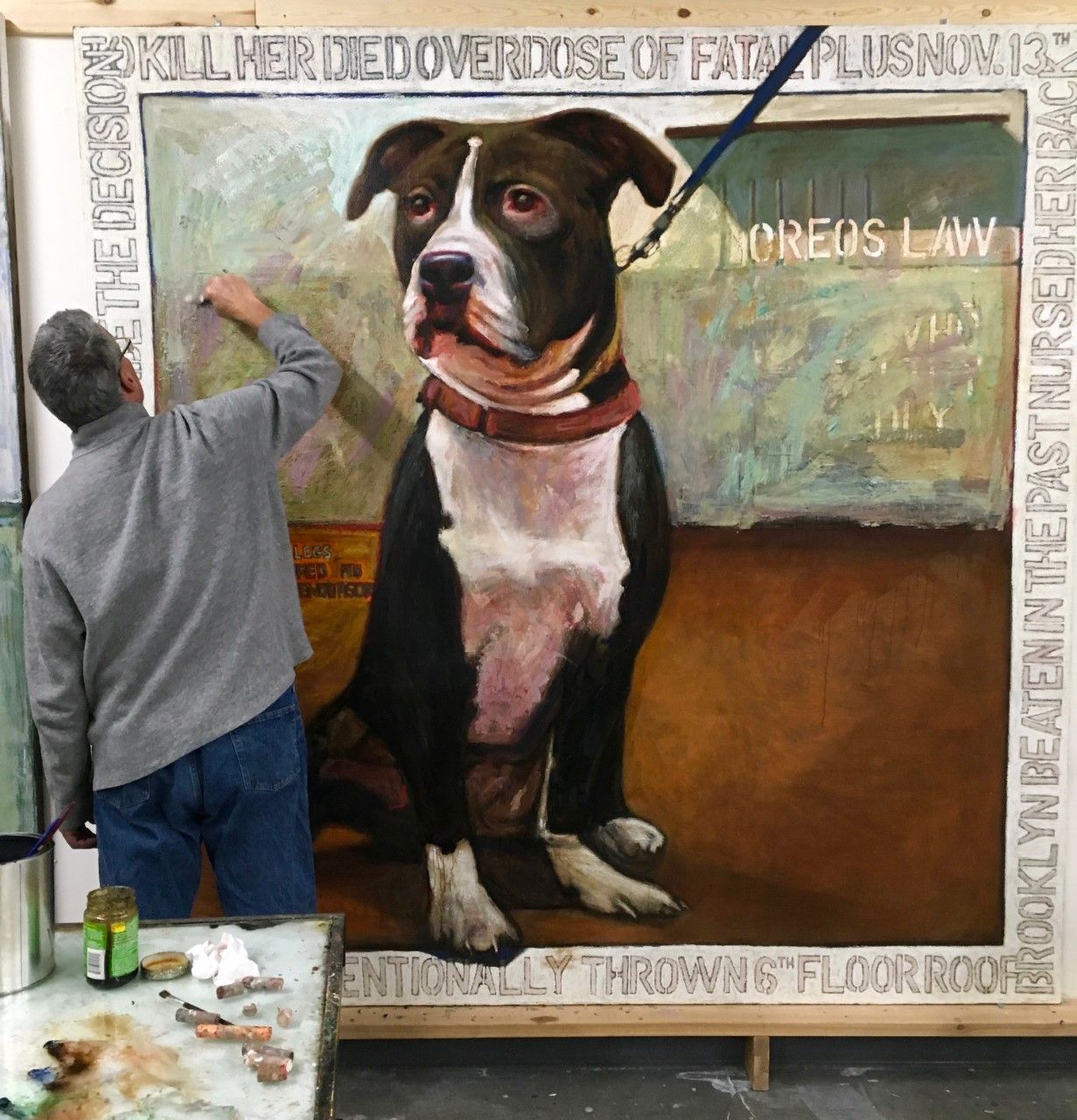 Each portrait is an emotional labor of love involving intense reflection on the canine’s face and on his/her tragic story to capture each dog’s soul. Most of the paintings are 12 inches by 12 inches. Some dogs whose experiences affected Barone the most are 8 feet by 8 feet, including a portrait of his dog Santina. She’s the gatekeeper of the collection, and he credits her for allowing him to find his calling.

The “An Act Of Dog” concept was born in 2011 when Santina died at 22 years old. His partner, Marina Dervan, began searching online for a new dog to help heal their broken hearts. Her research led her to the discovery of the devastating euthanasia statistics in our country. Each year, approximately 1.5 million shelter animals are euthanized (670,000 dogs and 860,000 and cats). Dervan began to send emails to Barone about all the senseless deaths of healthy and adoptable canines. Despite Barone’s continued pleas to her to stop sharing the heart wrenching articles, Dervan persisted. She knew she needed his help to devise a plan to help the innocent animals murdered simply because there is nowhere to place them. She told him that the situation would not improve if everyone ignored it because it’s too sad to think about.

Barone has been painting for 35 years and holds a Master’s of Fine Art. After much consideration, he decided the best way to increase awareness of the deplorable reality would be to paint euthanized dogs to show people their faces and to illustrate how enormous the number of daily deaths is. The compassionate duo quit their respective jobs and sold their retirement funds to begin their noble, all-consuming, and life-altering project.

Each painting memorializes a dog that deserved to live. One is of a dog named Oreo who was thrown off a 6-story roof. Oreo’s horrible story was covered in the media, and many people offered to adopt her after her surgery. Surgery was performed on her and then the shelter deemed her aggressive and killed her despite the numerous offers. Barone’s paintings of actual photos of Oreo at the “shelter” show that she was not aggressive, but a sweet girl rolling on her back for belly rubs.

Another tragic story is that of a senior dog named Batman. He was left outside overnight at a shelter and found frozen to death in the morning.

Lennox, the family dog in Dublin, Ireland who was sentenced to death in 2012 because he looked like a pit bull, is yet another tragic story captured by Barone An international appeal to return him to his family was launched soon after he was confiscated. Despite the public outcry, Lennox was murdered.

Each of the paintings tells a devastating story of an innocent dog that wanted nothing but love and was put to sleep because there was nowhere to put him/her. Some of the dogs in the collection weren’t even named. They were only assigned a number. Dervan named them to give them personal identities.

The collection of paintings is larger than the Sistine Chapel and, unlike Michelangelo who had helpers, Barone worked alone, painting most of the day, every day, to immortalize each dog’s spirit.

The objective of An Act of Dog is to raise funds for the creation of no-kill shelters, rescue organizations, spay and neuter programs, dog rehabilitation groups, and marketing campaigns to save homeless animals. An Act of Dog also seeks to bring awareness of puppy mills, dog fighting, abuse, animal testing, shelter negligence, breed specific legislation (BSL), aggression tests, killing for space — and even cats. Rescue legislation clearly needs to be changed to give dogs more than 72 hours to be claimed before they are destroyed. Barone painted eleven 8-by-8 foot paintings depicting each of those horrific injustices.

Many people are aware that our animal shelter system is not working. The kill numbers are astronomical. These beautiful portraits make the victims real. They aren’t faceless casualties, but adorable beings that deserved to play and cuddle for years.

Barone has been visiting schools to foster empathy in children and to teach them the power of art. Art can illustrate compassion and teach people about important topics, leading to social change.

He notes that, “Artists have a powerful medium for reporting on the consciousness of our current civilization and can paint visual records of the unpalatable realities of our time. The aim is to move the viewer to feel those realities and engage them in a dialogue for change.”

The media has embraced this beautiful and laborious mission. People magazine, The Huffington Post, the UK’s Daily Mail, the LA Times, USA Today, MSN, ABC, and many other notable publications and programs have profiled An Act of Dog.

Barone’s Act of Dog fame enables him to effect change. He painted Mira, a sweet dog who was beaten to death by a sociopathic coward named Larry Meadows. Thousands of Act of Dog’s followers sent emails, and now Larry is going to trial.

Once the 5,500 dog portraits were completed, Barone and Dervan continued to pursue their goal of raising awareness of animal suffering and raising money for the permanent exhibit. Barone has been painting the eleven 8 foot X 8 foot paintings about other causes, creating fine art products (including adorable night lights), painting commissioned portraits, and making woodcut tee shirts. 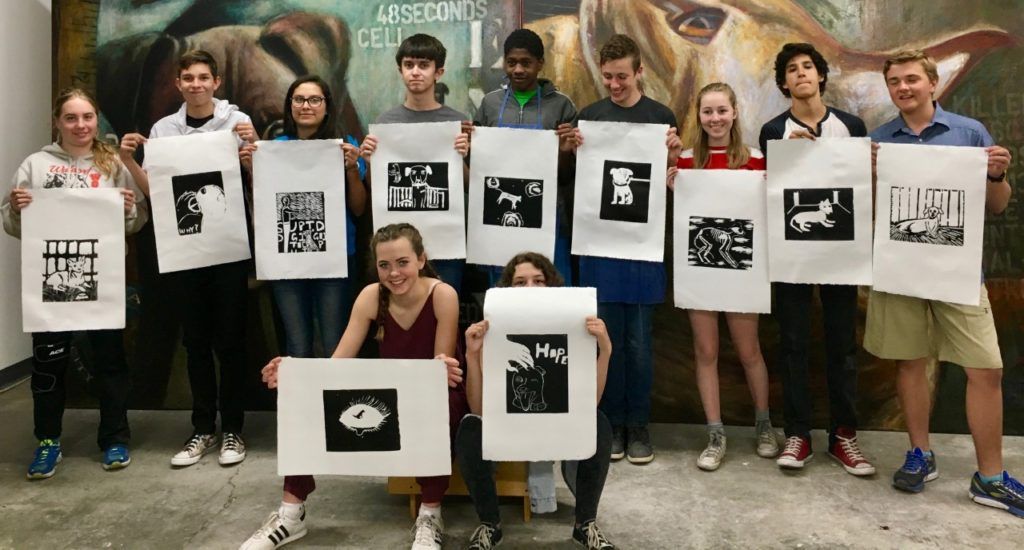 Students working with An Act of Dog, Courtesy of Mark Barone

All of the stunning merchandise sold on the website raises funds for animals and for the Museum of Compassion, where the work is to be shown. Students will have an interactive working space at the museum and people from all over the world will be able to view the collection.

Please visit An Act Of Dog and share the site with friends.