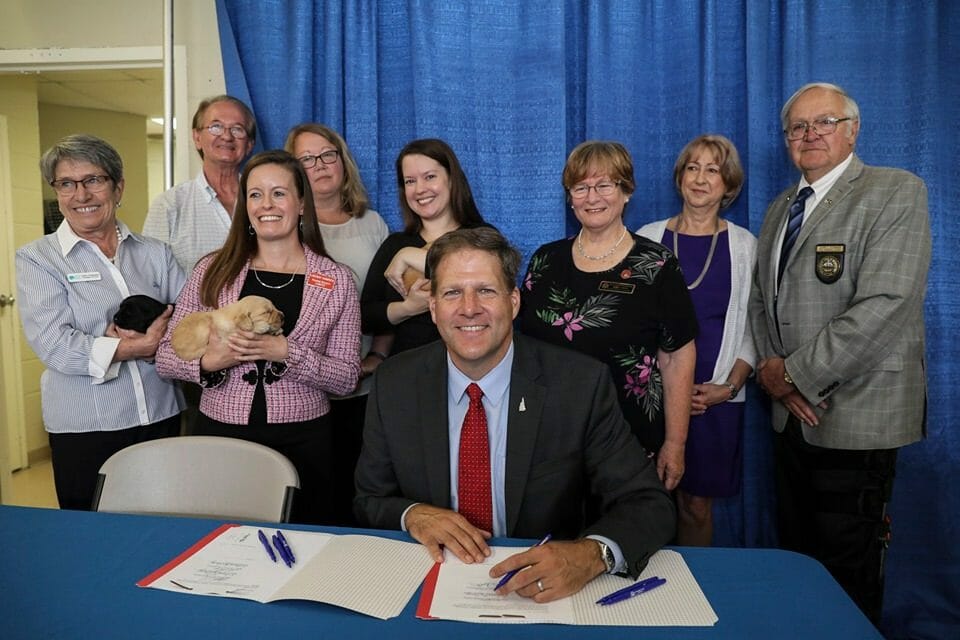 House Bill 459 and House Bill 605 not only prohibit abusers in certain cruelty cases from owning animals in future, but also increase penalties for the possession or production of materials involving animal fighting.

In addition, the new laws are designed to help alleviate animal suffering and speed up adoptions by requiring the swift hearing of cases after an animal is seized. As a result of the shortened prosecutorial timeline, taxpayers benefit from a reduction of the costs of care of the animals.

Sununu signed the bills — described as “two victories for animal protection legislation in New Hampshire” — at the Greater Nashua branch of the Humane Society of the United States (HSUS), which supported the bill.

“Governor Sununu has signed into law two crucial policies to address animal cruelty,” said Julia Seeley, New Hampshire state director, HSUS, at the signing. “Championed by Senator Jeb Bradley (R-Wolfeboro) and Representative Katherine Rogers (D-Concord), collectively these laws help address the enormous costs to care for animals who are rescued from neglect, prevent someone convicted of felony cruelty from owning or living with an animal for a minimum of five years, and ban the paraphernalia used in animal fighting.

“We are grateful to Governor Sununu, these legislative leaders, animal shelters, law enforcement and countless advocates for their commitment to preventing the suffering of animals in the Granite State,” she continued.

“Together, these two bills build upon the progress made last term in strengthening animal cruelty laws in New Hampshire by reducing costs associated with animal cruelty cases, preventing animal suffering and protecting them from animal cruelty,” added Sununu.