Home » Animals » Animal Rescue » Amy The Orangutan Finally Free After Years Chained Up in a CrateBy Sophie Dixon | May 11, 2017 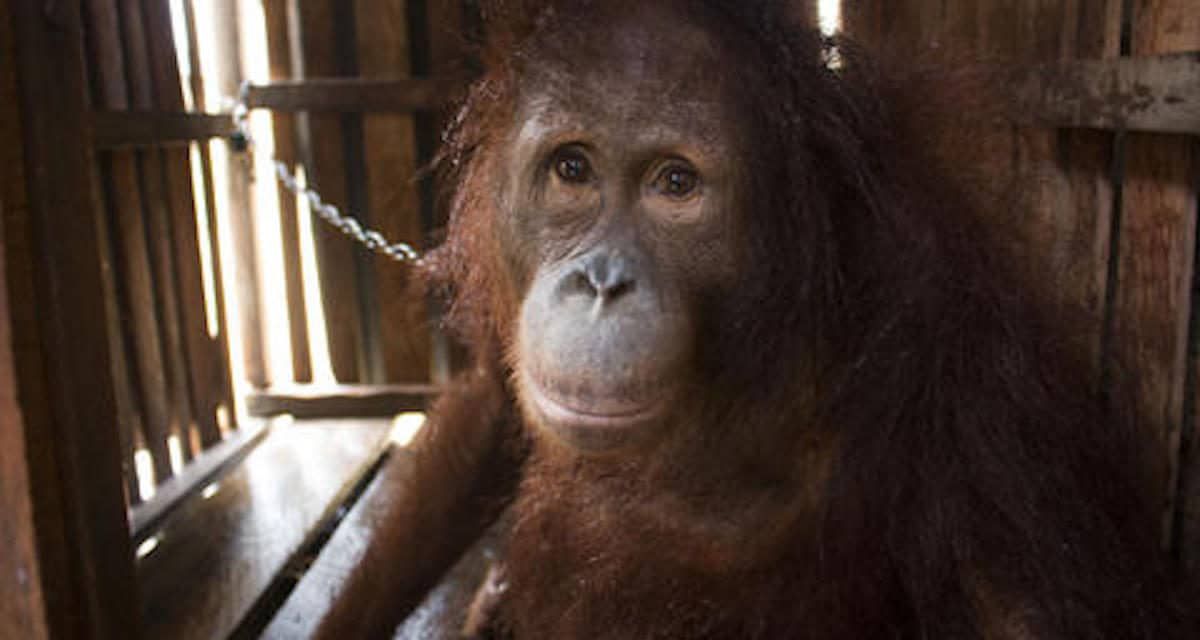 Imagine what it’s like to be trapped; how it feels to be locked away from the sunlight day after day, sheltered by only the darkness. There is a chain around your neck, holding you there against your will for what feels like an eternity. The chain is heavy, and will leave a scar. Your only comfort? A rag cloth that you can’t bear to let go of. Even your captor doesn’t visit you anymore…

Amy the Borneo orangutan suffered this exact fate. Despite her captor’s allegations that Amy had been imprisoned in the box for little more than a month, Amy’s rescuers, the International Animal Rescue team, believe her to have been chained up in her small wooden crate for much longer — perhaps for years. Amy is not alone in her suffering. The incredible orangutan species are at a greater threat to becoming extinct now more than ever before; it is estimated that a shocking, ‘1000-5000 orangutans are killed each year’.

Amy was discovered in the wooden crate far from the rain forests where she is believed to have been born. She was held captive, in a small village in Borneo, Indonesia, for seven years. Amy had been chained to the crate to ensure her escape would be impossible. It has been said that Amy’s eyes were full of despair; that she had the look of a lonely creature who had known only misery. Amy has lost the ability to straighten her legs and her back due to the extreme muscle damage that has resulted from sitting hunched over in a wooden crate for so long. Sadly, the physical damage is irreversible.

When the IAR team made their horrific discovery, Amy was clearly frightened of the vet who approached her as she turned away in to the corner of the crate. Amy’s reaction is unsurprising,  considering that she has suffered so much at the hand of human activity, both as a victim of abuse and as a victim of habitat destruction.

Possibly one of the most famous examples of brutal captivity in human history would be the punishment of solitary confinement, which can last from days to years. Many progressive organisations, such as the American civil liberties union and  Amnesty international, are fighting against solitary confinement in prisons to safeguard the prisoners from such brutality. The effects on a human mental and physical health after suffering such extreme long-term imprisonment are soul-destroying; the effects of solitary imprisonment were the same for Amy. 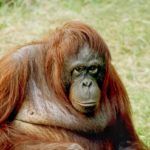 According to Michael Grodin, author of Health and Human Rights in a Changing World, the effects of such maltreatment upon those who are imprisoned ranges from severe anxiety and depression to perceptual distortions, obsessive thoughts, paranoia and psychosis. Animals also suffer mental and physical abrasions that are both terrifying and disturbing. Animals in captivity will display symptoms of depression such as pacing, self-mutilation, over-grooming or chewing on the bars of their cages. While it may seem as though a chimp at a zoo is playing or saying a friendly hello from behind the bars of its cage, the reality of the chimp’s actions may be heartbreaking to learn. Captivity and extreme maltreatment is likely to affect Amy the orangutan for the rest of her life.

Orangutans are not only a beautiful species; they are extremely intelligent. Popular BBC program ‘Spy in the Wild’ showed an ambitious female orangutan using a saw to cut through a branch. The talented orangutan was so precise that she even made a conscious effort to blow away the sawdust to further perfect her work. Orangutans use tools every day for a variety of purposes; these range from building nests, using rocks to crack open hard shelled fruit, using leaves to shelter themselves from the rain and using even bigger leaves to wrap around themselves, similar to wearing a poncho. According to National Geographic, it is likely that the orangutan may even be the closest human relative. Orangutans are remarkable creatures and we are sacrificing thousands of them every year for the urbanisation of more land and the exploitation of the rainforests.

Cheryl Knott, author of Orangutan Behaviour and Ecology, states that orangutans forage for fruit through the rainforest canopy where they spend almost their entire lives. Like billions of other species, the orangutans are made homeless as a direct and brutal consequence of deforestation. The earth is being stripped bare of its luscious rainforests, ‘an area equal to 50 football pitches’ is being destroyed with each and every minute that passes by. Orangutans are left vulnerable without the sanctity of their treetop homes and thus are forced to wander in to nearby villages where they are prone to greater exploitation by humans.

Karmele Sanchez, programme director of the IAR, said, “it’s high time people realised that, if they keep breaking the law by capturing orangutans and keeping or selling them as pets, then the species will soon become extinct.” Nevertheless, many orangutans in Indonesia, like Amy, will continue to be captured and sold on, where they are doomed to spend their lives abused and neglected or worse.

Unfortunately, after rescuing any animal from severe captivity and maltreatment, simply releasing the animal in to the wild is, in most cases, not an option. In Amy’s case, it is possible that she has only ever known captivity and therefore her natural instincts will be stunted and unpractised.

IAR Chief Executive Alan Knight described Amy’s unfortunate situation as a “tragic tale of cruelty and neglect [which] will require plenty of time and patience for Amy to recover,” and admits that he is “doubtful as to whether she will ever recover enough to be a candidate for release back in to the wild.” Left to fend herself, she would almost certainly not survive.

Fortunately, Amy now resides in an IAR rehabilitation center where she will be looked after by a team of experts and eventually be introduced to other rescued orangutans.

As the reader, there are things you can do to help protect the orangutans like Amy from cruelty and ultimately from extinction. Firstly, you can make the choice to buy palm oil free products or products that contain sustainably farmed palm oil. Research has proven that there are ways to farm palm oil sustainably and without the destruction of abundant rainforests. Scientists from both the University of Bath and York have been developing a yeast-based substitute for palm oil. As more research develops, the act of destroying rainforests is becoming increasingly unnecessary.

The Sumatran orangutan has gone from being endangered to critically endangered over the last century. There are now only 7,500 Sumatran orangutans left in the wild, and they need our help. A variety of organisations, such as the WWF and the IAR, are dedicated to protecting orangutans from the grave consequences of deforestation. By making only a small donation to these organisations, you will be actively helping the conservation of orangutans worldwide. Help save their natural habitats so that they aren’t forced to flee to nearby villages where greater dangers wait for them.

Lori L. Sheeran, author of The Neglected Ape, argues that “the orangutan is a victim of global economic forces… Although humans identify with orangutans, they are not sufficiently empathetic to protect the species from… imminent extinction.”

In a world dictated by human needs, activity and authority, the needs of animals are ignored; their well being and safety neglected. Nevertheless, there is still time for change, still room for action to be made. Be bold and make a difference on a smaller scale, or be brave and make a difference on a larger scale. Amy is one orangutan of thousands who are captured and subjected to neglect and abuse; since it was human activity that brought her to this fate, it is by default, our responsibility to make changes to our lifestyle for a greater cause.

See also: TWO DOLPHINS FINALLY GET TO GO HOME AFTER 20 YEARS IN CAPTIVITY