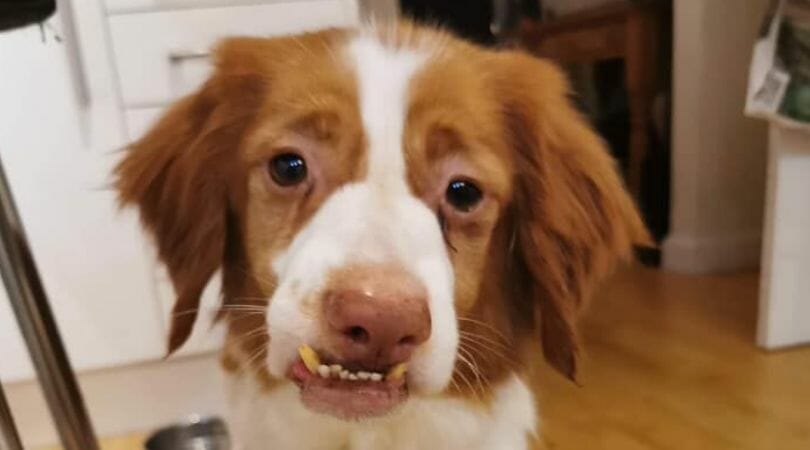 Pepo, a two-year-old rescue dog with an adorable underbite and out-turned feet, has finally found a loving forever home that embraces his unique ‘evil minion’ look.

Animal Angels Global rescued the wobbly-legged pup from the streets of Spain, where rescuers discovered him begging for food. They transported him to the U.K., and X-rays revealed multiple broken bones — evidence suggesting Pepo might’ve been violently abused as a puppy.

For eight months, the shelter tried to find a new guardian for Pepo on social media, but the posts went unanswered. Then, after appealing to prospective pet parents from the pup’s point of view, one post went viral.

“Hello iz me, Pepo,” the post read. “I has bin lookin for a noo familee for a long time now and I’m wondrin if nobody wants me becos of my teefs. I love dogs and I don’t even mind cats. I loves children an I come bak wen I’m called and I loves livin in England wiv all the mud. Wood anybody love me and make me a part of their familee?”

The internet fell head-over-heels for the previously overlooked dog, and adoption applications poured in. Devon resident Jo Strachan, who was seeking a companion for her dog after his canine sibling passed away, was chosen to be Pepo’s new caretaker from the list of over 1,000 applicants.

“I’ve never been picked as being the right one for anything in particular,” she told the Daily Mail, “so to be trusted and given the opportunity to look after [Pepo] is a big thing.”

The fortunate pup is adjusting well to his new home and has a special bond with Strachan, who is amazed at the canine’s persistent and loving nature.

“He is the most beautiful dog, the dog that just wants to be so friendly with everybody, but the dog that has also had the biggest, toughest, most awful time as a little thing,” she said. “He really is just one of these animals where you think, how can he have been so mistreated and still want human company and trust? It’s just amazing.”