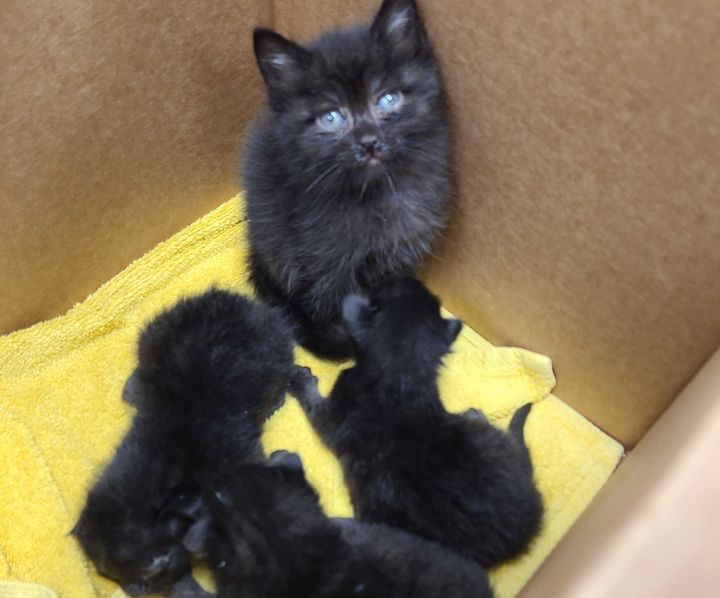 A tiny black kitten now named Binx showed incredible kindness and responsibility when he took it upon himself to adopt three younger kittens in need of some TLC.

A passerby found the four tiny kittens and waited to see if the mother cat returned to care for them. When she did not, the caring individual took the kittens to the KC Pet Rescue in Kansas.

The shelter staff immediately discovered that Binx, a 6-week-old kitten, was looking out for the three others, despite being at such a young age that he couldn’t even take proper care of himself. Rescuers were so impressed that they started describing young Binx as “most responsible kitten in the world,” according to the shelter’s Facebook post.

“The person who found them told us that he’s been taking care of babies, and we think this is about the cutest thing ever,” the shelter said about Binx.

The other orphaned kitties — now named Ollie, Frankie and Ziggy — were in desperate need of milk, with staff stepping in to bottle feed them, Huffpost reported. Although Binx couldn’t provide that essential nourishment, he nevertheless was looking out for the youngsters “as best he could,” the shelter’s Tori Fugate told HuffPost.

While it’s unknown what happened to the mother cat, the four kittens are “doing great so far,” Fugate said. The young cats now are in the care of a foster home, where the youngest ones are being bottle-fed every few hours.

Caring Binx is still with them.

“They all went to a foster home together,” Fugate said, “because how could we split them up?”