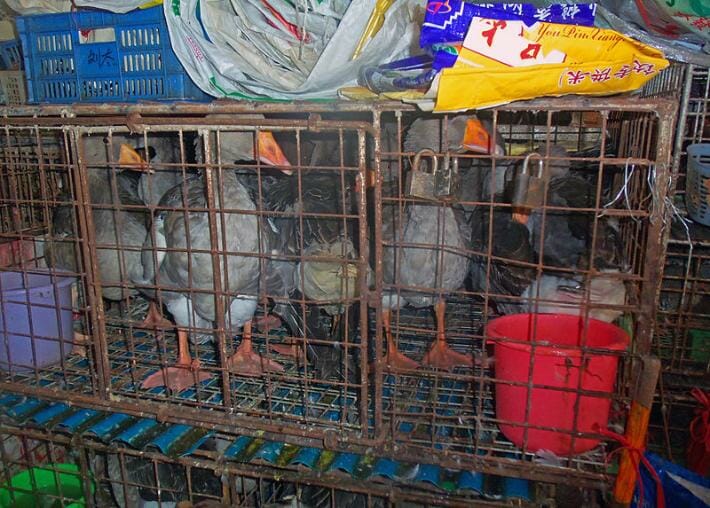 More than 60 bipartisan lawmakers are calling for an immediate worldwide ban on “wet” markets — or live wildlife markets — and international wildlife trading due to the connection between captive animals and the spread of zoonotic diseases, such as the current coronavirus pandemic.

Citing wildlife markets as “prime transmission locations for these pathogens,” Sens. Cory Booker (D-NJ) and Lindsey Graham (R-SC) and Reps. Michael McCaul (R-TX) and Mike Quigley (D-IL) led the effort to urge leaders from the World Health Organization (WHO), World Organization for Animal Health (OIE), and the Food and Agriculture Organization of the United Nations (FAO) to take “aggressive action toward a global shutdown” of the aforementioned dangerous markets.

“It is clear that to protect human health,” the letter read, “these close and sustained interactions with wildlife must stop.”

Wildlife markets create the ideal environment for the spread of zoonotic diseases. Animals are forced to live in congested areas surrounded by thousands of people, and the stressful environment makes it more likely that viruses shed. And these markets are horrendously cruel.

“Market vendors cage animals of different species in close proximity, where the animals are likely to urinate, defecate and potentially bleed or salivate on the animals below them,” the letter continued. “The risk to food buyers can be through the slaughter of animals in front of customers, releasing disease carrying fluids like blood, saliva, and excrement into the air, which can then splash or splatter on nearby people, be consumed or inadvertently inhaled by humans.”

Numerous officials and organizations support the call for a prompt worldwide ban on live wildlife markets, including the Center for Biological Diversity, the acting U.N. Chief of Biodiversity, infectious disease expert Dr. Anthony Fauci, and the founder of Lady Freethinker (LFT) Nina Jackel.

“Wildlife markets are not only abhorrently cruel, but have proven devastating to global public health,” said Jackel. “It’s encouraging to see our nation’s leaders band together in support of ending these dangerous facilities, and I encourage them to work to end live animal markets right here in the U.S., as well.”

For those that haven’t, sign LFT’s petition urging lawmakers to immediately shut down all live animal markets in New York. For the nearly 20,000 readers that already have, thank you for always giving a voice to the voiceless and making the world a much safer place.