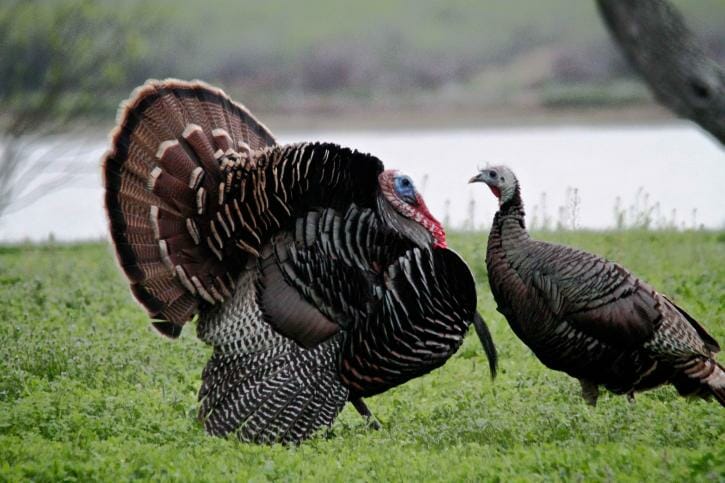 Thanksgiving is quickly approaching. While the holiday season is a cause for celebration for many humans, it’s horrifying for turkeys. Trapped on factory farms, nearly 50 million turkeys are slaughtered each year in preparation for a single day each November.

Fortunately, there are cruelty-free, plant-based turkey alternatives readily available in most large grocery stores. Before sitting down for Thanksgiving dinner this year, consider who is on millions of Americans’ plates and opt for a more compassionate feast.

Here are five fascinating facts about turkeys showing why they deserve a life full of freedom and enjoyment, not confinement and torture.

Some people think turkeys are dopey and slow, but they’re actually quick. Wild turkeys can fly up to 55 miles per hour (MPH) and run up to 12 MPH. That means they can run faster than most people and fly as fast as cars on the highway!

On factory farms, turkeys sometimes never see the light of day. They’re never allowed to run or fly. And even if they wanted to, captive turkeys have been bred to have unnaturally large, meaty breasts, which prevents them from flying.

2. Turkeys Can See and Hear Better Than People

Not only are turkeys fast, they have better vision and hearing than most people. Their eyes are located on the sides of their heads, meaning they have monocular, periscopic vision that allows them to have a 360-degree field of vision. Not only that, but turkeys also have flattened corneas, which means they can probably see some colors.

Turkeys’ hearing is even better than their eye sight. They can almost immediately locate the source of sounds. And they can hear lower-frequency and more distant sounds better than people can. All of this helps them avoid predators in the wild.

3. Turkeys Have Been Here 30 Times Longer Than Humans

Since turkeys are domesticated animals, some people think they’ve only been around since humans have been around. But that isn’t true. Turkeys are actually over 10 million years old, which is more than 30 times as old as Homo sapiens.

During their nearly 11 million year existence, turkeys almost went extinct twice. During the Megafaunal Extinction between 10,000 and 12,000 years ago, the California turkey population dwindled due to the extinction event and Native Americans hunting the birds. Then, due to unprecedented hunting pressures by European settlers, turkeys were erased from Connecticut and Vermont by the mid-1800s. By the mid-1900s, they were wiped out of nearly 20 states and their population dropped from 10 million to 200,000.

Eventually, turkeys recovered. They are no longer endangered. But people almost ate turkeys out of existence… twice.

What could turkeys possibly have in common with cats? As it turns out, female turkeys don’t gobble; they purr. While males are known for a loud, rapid gurgling sound, females are quieter. They give off a soft, rolling call when they’re content. Take a listen here.

5. Turkeys Are Curious, Work Together, and Have Great Memory

Last, but certainly not least, turkeys are curious creatures who work together in social groups and have great memories.

“[Turkeys] are smart, adaptable, inquisitive, cooperative, and they have a great memory of geography and food sources,” said Todd Witcher, executive director of Discover Life in America, a nonprofit that manages the Smokies All Taxa Biodiversity Inventory.

If you’re skeptical, check out Joe Hutto’s book Illumination in the Flatwoods: A Season Living Amount the Wild Turkey or watch this Emmy-award-winning documentary “My Life as a Turkey” for free below: