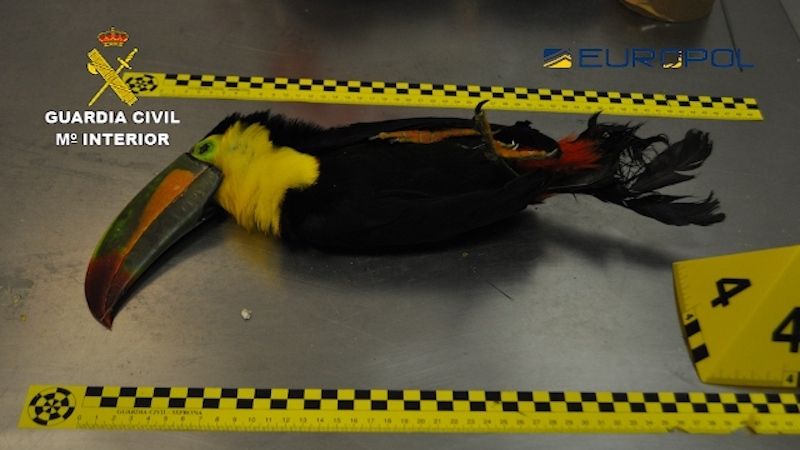 More than 2,000 animals were seized and 29 people arrested this week as the result of an investigation by the Spanish Guardia Civil, supported by Europol, the European Union’s law enforcement agency. The individuals apprehended were from major organized crime networks and have been charged with a variety of violations including smuggling, wildlife crimes, animal abuse and being part of a criminal organization.

Named Operation SUZAKU, this successful bust uncovered a large network of traders who were smuggling into Spain a wide variety of bird species originating from Africa and Latin America, with an estimated street value of over half a million euros. Sadly, as commonly happens during illegal trafficking of animals, up to 50% of the birds died in transit.

The international trafficking of endangered species is hugely profitable for organized crime networks, with experts stating that the trade is a close third to trafficking in humans and drugs. Although wildlife smuggling has been in action for decades, the scale and type of activities have increased and changed greatly over the last few years. Europol, the European Union’s law enforcement agency, states that the worldwide demand for animals and animal-related products is incredibly high, and the trade is has a comparatively low-risk/high-profit ratio. Europol estimate the trafficking of endangered species to generate over EUR 4.4 billion in profits globally per year.

Europe is a key market for the illegal wildlife trade: it’s a central transit point for trafficking to other regions, and also a source for several endangered species. To address these issues, the European Commission endorsed the Communication on the EU Action Plan against Wildlife Trafficking in June 2016, which outlined an in-depth plan for the EU to tackle wildlife crime in the future.

The landmark SUZAKU bust is an important step forward in the battle against the illegal wildlife trade. It sends a clear signal to these cruel criminal networks that we are willing to fight back in defense of those who can’t defend themselves.