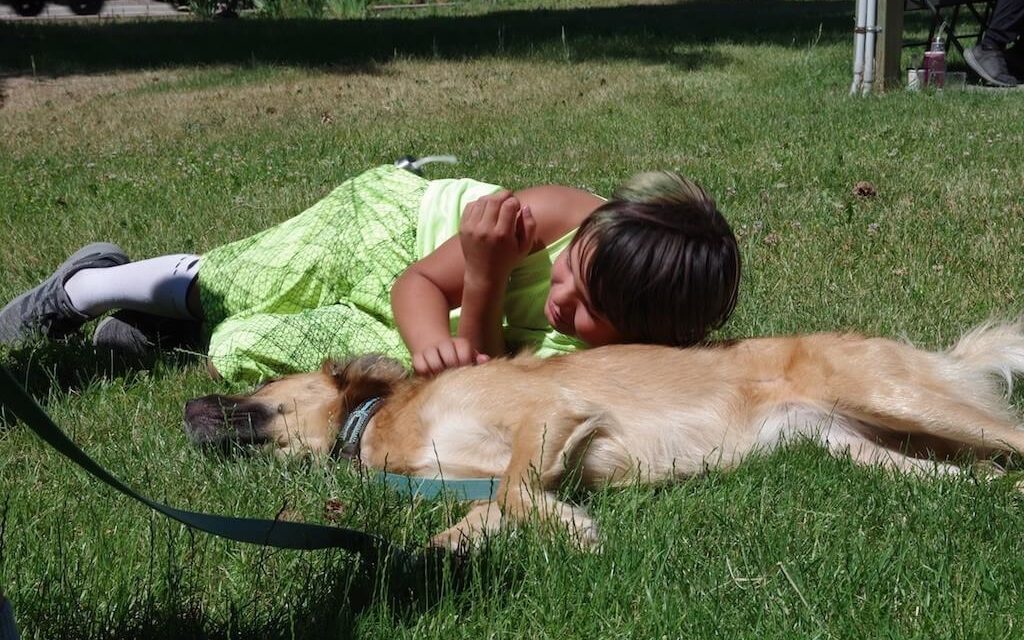 Youth who have experienced trauma and rescued dogs are helping each other heal through a new summer camp hosted by the Arlee Rehabilitation Center (ARC) near the Flathead Indian Reservation in Montana.

The healing space is a testament to the surrounding community and staff, who have worked hard to help build resilience in both the human and canine participants, said ARC’s Executive Director Filip Panusz.

ARC recruits youth across the reservation via outreach through the Confederated Salish and Kootenai Tribes, including the mental health and tribal health departments and reservation schools. While many of the camp’s participants are indigenous, the sessions are open to any youth, aged 8 through 13, who reside on the reservation and may have experienced trauma or could benefit from the healing presence of animals, Panusz said.

This year’s sessions featured therapy dogs, already comfortable with people, but also some of ARC’s rehabilitated rescues— including a pitbull mix named Bogs, whom they found abandoned on the streets, less than two blocks away from the camp’s location, emaciated and limping after being hit by a car.

Bog’s injuries were so severe that he had to have his front leg amputated. As he recovered from the surgery, Bogs stayed upbeat and sweet, if a little wary and unsure.  As Panusz spent time with Bogs, he realized what a powerful teacher he might be for the youth who would soon be arriving at the July camp.

“He has gone through some pretty severe trauma,” Panusz told Lady Freethinker. “He also is a dog where some people might look at him and judge him, because of his breed, or because he has three legs. One of the main themes in our camp is resiliency and how to navigate life’s challenges, and there was no better way to bring that home to the youth. He also gave us an opening to talk about race, and prejudice, and if they’ve been treated differently.”

But Panusz also wanted to make sure that Bog’s own welfare was kept priority. Before introducing Bogs to the youth, he taught them how to talk to a dog with a soft and gentle tone, how to approach slowly and pay attention to Bogs’ body language, to not stare directly into Bogs’ eyes and to kindly offer him a treat if he wanted to approach the youth.

While he hopes those lessons will translate into the youth’s interactions with other humans, Panusz said those teachings also helped change the way that the youth saw animals on the reservation. Some of the youth were used to seeing rocks being thrown at dogs, for example, he said.

“I saw a transformation,” he said. “Without me having to remind them, I really saw them change the way they spoke to him and approached him.”

Bogs ended up being a big hit — making the camp “an unforgettable experience,” ARC said in a Facebook post. A week after the camp let out, Bogs also got some good karma for his courage at camp — landing a forever home with a loving family, two canine pals and a kitty companion. 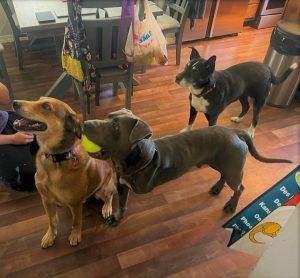 Children also really connected with Silas, a gentle black Labrador-type dog who also was rescued from the streets.

“Not that long ago, he (Silas) was dodging traffic as an abandoned, undernourished mutt on the streets of our Arlee community,” ARC wrote in a Facebook post above an image of a smiling child, hugging Silas, whose gentle eyes stared into the camera. “Today, he is a hero and a healer!”

Although Panusz said quantifying the impact of the camp could be difficult, positive feedback from the youth and their parents has shown him the camp’s healing concept is working.

“We had one child who attended in June who wanted to come back in July,” he said. “I also had a parent who told me she had seen a marked difference in her son’s behavior after the camp. That’s such a great validation.”

The healing power of animals is particularly impactful for indigenous communities, who recognize animals’ worth and teachings within their cultural stories and heritage but who may be mistrustful of Western ideologies about trauma or professional therapists, Panusz added.

“The indigenous experience of healing is often very different,” he said. “There’s a spiritual dimension, but also a connection to the natural world and the Great Spirit and that healing power. When a child or adult has gone through a challenging time, it’s hard to go into a professional setting with a stranger. But you put that child with an animal, and that animal is not judging. We do social and emotional learning at our camps, but the kids gravitate towards the dogs.” 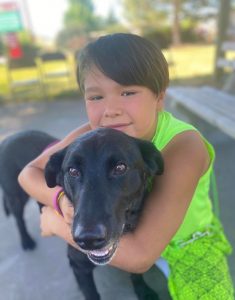 The notion of animal kinship within indigenous communities also has much to do with survival and healing, ARC added in a recent Facebook post.

The idea for the nonprofit started more than ten years ago, when Panusz was walking near the Valley of the Moon Recreation Center, near Missoula, with his two shelter dogs – one of whom tragically died as a result of getting caught in a beaver trap.  Panusz sought healing by working for the Humane Society of Western Montana, where he first encountered what people were calling “Rez Dogs” – survivors he found held a special, gentle power, according to ARC’s website.

He tucked away the idea of creating a sanctuary on the nearby reservation that would help rescued dogs, while also helping the tribal people whom ARC notes on its website carry an inordinate burden from accumulated political and cultural persecution – including the 1904 Flathead Allotment Act, as well as personal tragedies.

His path led him to additional leadership roles within animal protection and ultimately to a nonprofit position on the reservation itself.

Panusz “never imagined the amazing stories and relationships that would grow out of his time on the Reservation” or that the project he had filed away “would suddenly find a place, a time, a purpose, and an amazing community of support,”  according to ARC’s website.

One of those was a connection to a family with a beloved dog, Gunner, and a 10-year-old child who tragically took his own life – a catalyzing event that caused Panusz to dust off his old dream. His vision – of a place where human victims of trauma could find healing and therapy by helping rehabilitate neglected, under-socialized, or traumatized rescued animals – coalesced first as a subsidiary program of the Missoula Urban Indian Health Center in 2019 before becoming an independent program in 2020. 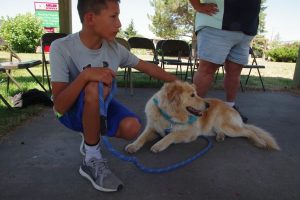 “ARC recognizes the powerful bonds between people and animals, as well as the challenges that indigenous communities face due to historical trauma, racial injustice, and economic disadvantage,” ARC said on its website. “Our goals are to mitigate youth suicide risk, help people afflicted by various forms of trauma and rescue reservation animals.”

Panusz hopes to improve and expand the camps in the upcoming years, as well as share his model — of healing both animals and people — with other reservations.

“Animal rescue is happening on reservations, but in most cases it’s straight up rescue,” he said. “You pull the animal out and find a home elsewhere. But where are the people and the culture in that equation? You might rescue a few animals, but you’ll have 200 animals to take their place. You’re not going to end the never-ending cycle. The healing has to go both ways. We are about humans and animals equally.”

Although ARC is a small team, Panusz said he’s optimistic and hopeful for the future.

“We do what we can,” he said. “We have our intuition and hearts to guide us, and we hope we are making a difference.”

In addition to the summer camps, ARC also runs Paws on the Ground, a grassroots program in which community volunteers identify residents and animals in crisis and connect them to ARC’s services, and the Flathead Reservation Spay/Neuter Task force, a trap and release program with a bimonthly spay/neuter clinic for cats and low-income veterinary support.

Last year, ARC rescued 13 dogs, adopted out six, and provided rehabilitation services to animals with broken limbs, a shattered pelvis, and tumors, as well as rescued four puppies dumped into a creek. The nonprofit also had 29 cats and 82 dogs served at its first spay/neuter clinic, and also distributed more than 17,000 pounds of food to an estimated 164 families and more than 800 animals on the reservation, according to statistics on ARC’s website. 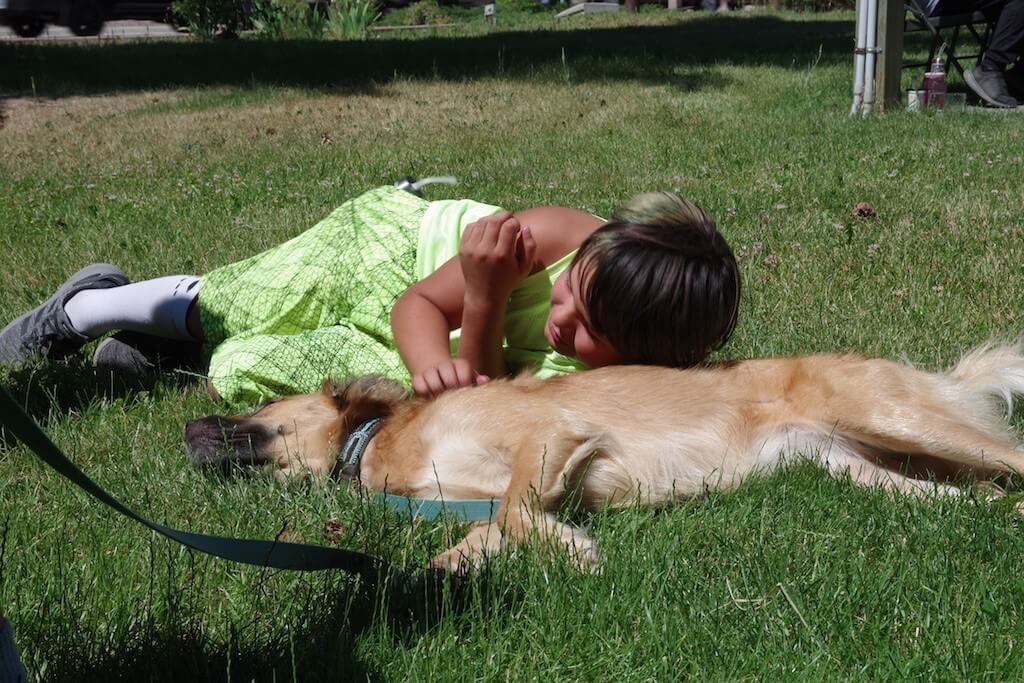