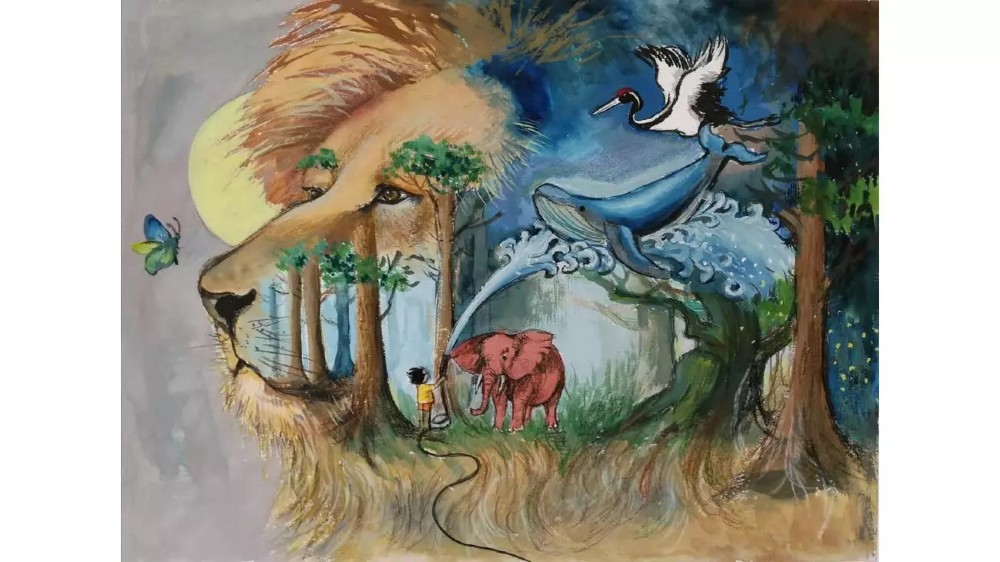 A young Chinese artist has received highest honors as the winner of the 2022 World Wildlife Day International Youth Art contest for his painting of a young child in a forest surrounded by several vulnerable species, which judges said showed humanity’s role in supporting biodiversity and habitat restoration.

Yanjun Mao, 13, was one of more than 1,500 entrants from 58 countries to submit original artwork to this year’s competition to mark World Wildlife Day on March 3. The contest asked participants to reflect on the theme “Recovering Key Species for Ecosystem Restoration” and the importance of drawing attention to endangered and critically endangered wildlife, while also highlighting the power of conservation efforts to protect biodiversity worldwide.

Yanjun’s painting, titled “Return Home,” shows a child with a hose spraying water toward the sky, with a blue whale swimming in the resulting waves and an elephant and crane-like bird roaming in lush forests nearby. The image is set within the face of a lion gazing peacefully at a butterfly-like creature and was “beautifully depicted,” said the International Fund for Animal Welfare (IFAW), one of the sponsors of the contest.

The painting “captures not just the interconnectedness between humans and our natural world, but how a young person might see their place in it – smaller and more surrounded by nature than our global societies seem to assume, and yet wanting to help, despite the enormity,” said Midori Paxton, head of Ecosystems and Biodiversity at the United Nations Development Programme.

“In a year when the theme of World Wildlife Day is ‘Recovering Key Species for Ecosystem Restoration’, it offers a beautiful, timely message,” she added.

“Choosing one winner was no easy task,” Kessler said. “The depictions of both flora and fauna created by such young artists not only exquisitely captures this year’s theme, but also vividly reflects their deep sense of connection to the natural world.”

The competition was sponsored by the International Fund for Animal Welfare (IFAW), the Secretariat of the Convention on International Trade in Endangered Species of Wild Fauna and Flora (CITES), and the United Nations Development Program (UNDP).

“Return Home” and the other 11 finalist entries can be found on the IFAW website.