With Love and Care, This Nearly-Hairless Rescue Pup Has Grown A Beautiful Coat of Fur

Home » Animals » With Love and Care, This Nearly-Hairless Rescue Pup Has Grown A Beautiful Coat of FurBy Jane Wolfe | October 28, 2019 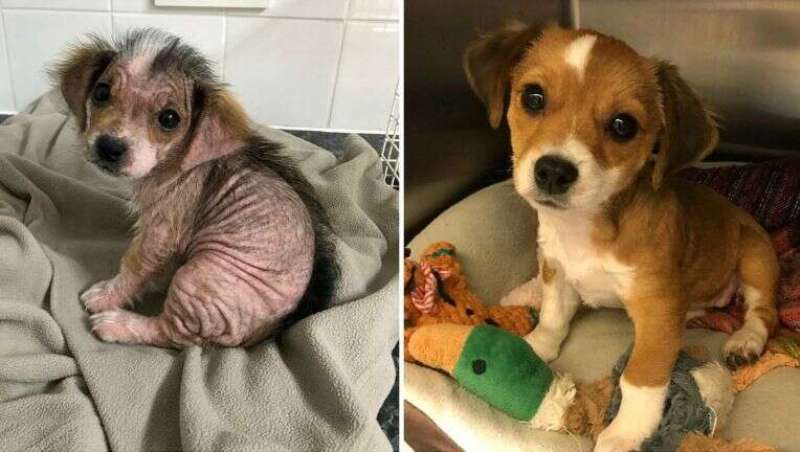 Proving that a loving home can work wonders when it comes to animals in need, an English veterinary assistant has nursed a tiny rescue puppy back to health — from being almost totally bald after a terrible case of mange to having a healthy and full coat of fur.

Attracted by the puppy’s “beautiful eyes” — and having already given a forever home to a dog and four cats — Jessie DeFreitas from Crawley, West Sussex, couldn’t resist taking the pup home when the uncared-for animal was brought into the veterinary clinic where she works. It was the dog’s owners’ neglect that had led to this terrible situation, and the vet told them that the puppy would die if she wasn’t taken into the clinic’s care.

“When I was told we had a new dog, I had to see her,” 21-year-old DeFreitas told the British news agency South West News Service (SWNS). “She may have had mange, but she had beautiful eyes.”

Despite the fact the pup required constant care, the veterinary assistant asked to foster her. “I am a massive animal lover — a massive sucker for the cute ones, especially,” DeFreitas said. “I fell in love with her from the beginning.”

DeFreitas changed the feisty little puppy’s name from Honey to Terra because it suited the dog’s temperament. Unsurprisingly, due to her dreadful skin condition, she was initially “a little terror,” biting and angry. However, not only did her rescuer manage to transform Terra’s appearance, but also her humor. Given love and tenderness, the small pup changed into a “kind and sweet” pet within just three months.

This happy story just goes to show the importance of giving rescue animals a second chance at life within the nurturing environment of a foster home.