Advancing Law for Animals and Farm Sanctuary have launched the #wecanread campaign to combat proposed FDA changes that would require the re-labeling of many well-known non-dairy beverages, such as soy milk, almond milk, and rice milk.

The campaign’s purpose is to demonstrate that banning the names of these products is unnecessary and unconstitutional. Vanessa Shakib, General Counsel at Advancing Law for Animals, explains why: “There is no basis to ban everyday phrases like ‘almond milk.’ That’s why this campaign is not just for those who buy plant-based dairy alternatives. This campaign is for everyone who supports the First Amendment, and everyone concerned by government overreach.”

Although the FDA has defined milk as the “lacteal secretion” of “one or more healthy cows” for years, they’ve never attempted to enforce the description – until now. Under the immense pressure of the struggling dairy industry, which argues that “real” milk must come from animals, FDA Commissioner Scott Gottlieb intends to tighten the policy.

The planned change indicates that the FDA thinks consumers are confused about what they’re purchasing when they buy non-dairy beverages that include the word “milk” on their labels. In fact, Gottlieb cited concerns that customers are being misled about the nutritional value of these products.

But that’s just not the case.

After news of the pending restrictions broke last year, Blue Diamond spokeswoman Alicia Rockwell reassured the public that customers know what they’re getting when they buy Almond Breeze (the company’s brand of almond milk), stating: “We stand by how clearly we label our products.” She added, “We don’t see that there’s confusion among consumers.”

Participating in the campaign is easy. All you have to do is take a selfie with your favorite plant-based dairy alternative and post it on Instagram, along with the caption “Dear #fda, #wecanread! Prohibiting names like ‘almond milk’ is unnecessary and unconstitutional.” Make sure you also tag @advancinglawforanimals and @farmsanctuary, along with your favorite dairy alternatives. 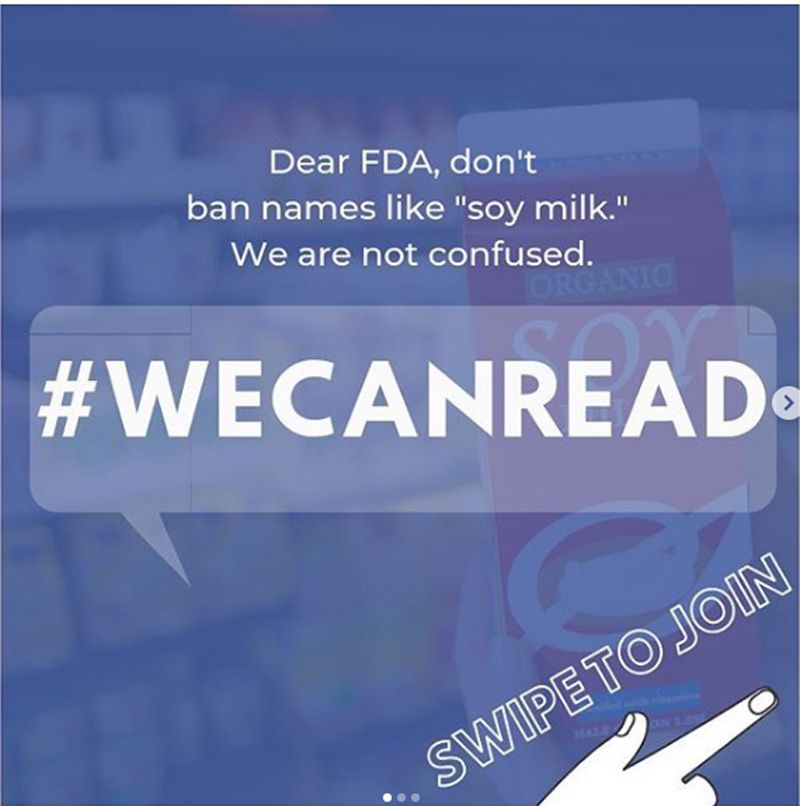