Wait, Don’t Toss That Pumpkin! Donate it to Animal Sanctuaries in Need This Winter 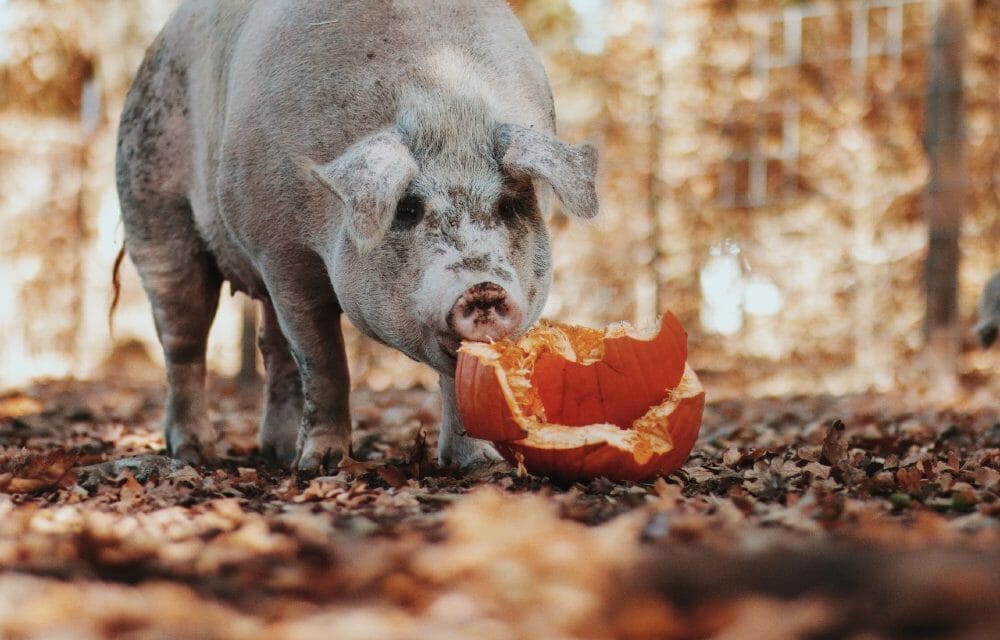 “Pigs love pumpkins!” said Lighthouse Farm Sanctuary, based in Oregon. “Pumpkins are not only nutritious but provide enrichment for the sanctuary residents by varying their diet and providing new experiences as they wrestle and roll the pumpkins.”

Other species that can safely enjoy pumpkins include tigers, monkeys, bears, and tortoises, said Black Beauty Ranch Director Noelle Almrud, who told KSAT that her refuge’s resident tigers “had a blast investigating” pumpkin donations this year.

“They tackled, chased, pounced and then swam in their pools with the pumpkins,” she said.

“As the weather changes, the over 350 animals who call Lighthouse Farm Sanctuary home have to increase their calorie intake to stay warm and healthy,” Jakubisin said. “Our expenses feeding the animals skyrockets in the winter as there is no grass to graze and donated pumpkins are put to good use!”

Non-domesticated animals, like squirrels and raccoons, also can enjoy pumpkins left in wooded areas. Squirrels tend to dig out holes in the pumpkins’ flesh to get to the seeds, and raccoons often finish the job, Lighthouse Farm Sanctuary said in a press release.

Pumpkins for Pigs, a website dedicated to matching discarded pumpkins with sanctuaries in need throughout the United States, added that pumpkins are a great source of food or treats for animals, as well as a great compost. Their guidelines require that donations be “noncarved, non-inked, [and] non-painted.”

Along those lines, to make sure you’re giving the animals a “treat” and not a “trick” this holiday season, please make sure any pumpkin donations are in a safe state. Generally, pumpkins can be whole or carved but should be free from the following hazards:

You can find a sanctuary or wildlife refuge near you that is collecting pumpkin donations by searching the web or visiting Pumpkins for Pigs’ website. Make sure to check in with the sanctuary to ensure they are still accepting donations before dropping them off.

If you’re in the area, Lighthouse Farm Sanctuary is accepting dropped off pumpkin donations outside the sanctuary’s gate at 36831 Richardson Gap Road in Scio, Ore.