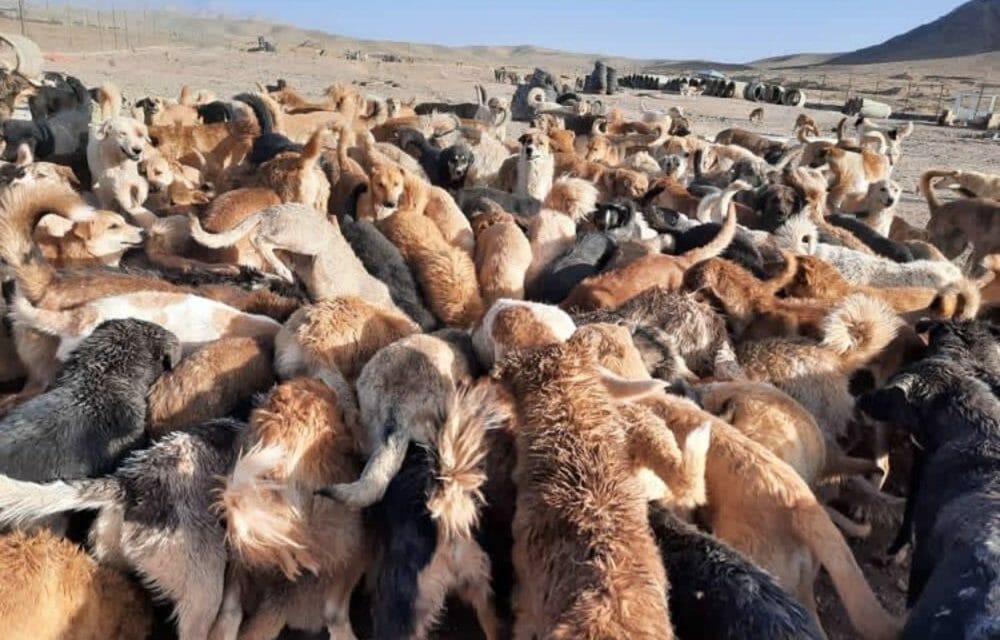 Several times a week, masked volunteers cart hundreds of dollars of food in large bowls into an enclosure on municipality-owned land in Kerman, Iran,  known as a “shelter,” where the wagging tails and cacophonous barks of more than 2,000 stray dogs greet them.

The dogs are doing better now that they have food, a volunteer told Lady Freethinker.  Before, they allegedly were so hungry that they’d cannibalize each other and knock the food bowls over in their haste to commandeer a sliver of sustenance.

The landscape for dogs in Iran is desolately different from the pooch-permitting societies many around the world know and love. In the United States, it’s not uncommon to see bumper stickers reading “I Love Dogs” or “Dog Mama,” or paw prints emblazoned in the middle of the American flag.

But in Iran, it’s a serious crime to walk a dog down the street or allow dogs to stick their heads out the window. In recent years, the city councils have even discussed penalties of $3,000 and 74 lashes for violators.

Legislators also have pushed for a general ban on dog guardianship, backed culturally by a religious belief that dogs are haram — forbidden — or najis– unclean.

Into this bleak backdropped stepped Maryam Seyedin, a long-time crusader for dogs in the Middle East, who noted in a recent Facebook post that the shelter has “a long way to go.”

“The cost of food for so many dogs is not a joke,” she wrote. “And every day we have to take food to all these waiting eyes.”

Seyedin directed Lady Freethinker to Soma, a volunteer based in the United Kingdom who speaks English and serves as the efforts’ representative.

“There are a lot of people in Iran who are dog lovers, who are working day in and day out,” Soma said. “But those people are not going to go to a shelter like Kerman. They are going to have a cute little dog, like a chihuahua.”

The immense need, and the lack of resources, have left volunteers on-the-ground in Iran scrambling to feed and care for Kerman’s dogs, as more arrive each day from the streets and unknown sources.

Meanwhile, caring individuals in the United Kingdom and the United States have stepped up to try to help.

Rachel Doherty, a U.S.-based volunteer and liaison for Kerman Shelter, who first learned about Kerman through videos and conversations with expatriate friends, said that what volunteers are accomplishing given sanctions, scarce resources, and little support is nothing short of amazing.

“Kerman could be a benchmark for the future care and welfare of canines in Iran,” Doherty said. “If we can show and teach the benefits of canines to their culture, that they are beneficial and to be valued, and not held in disdain, we can make a real change.” 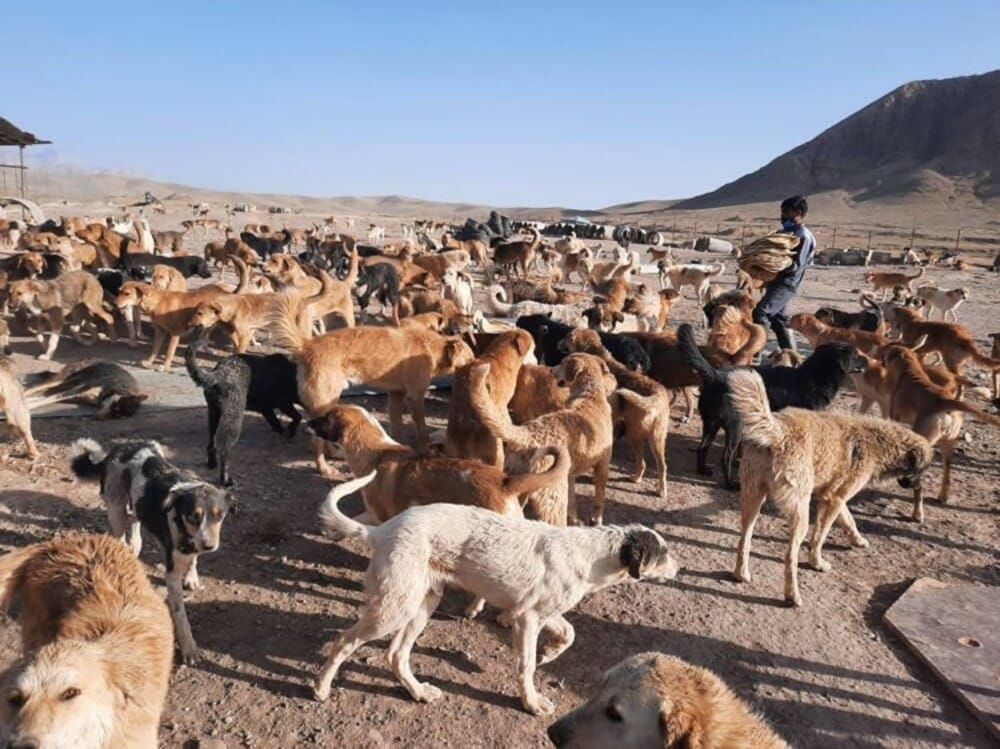 Dogs in Crisis in Kerman, Iran

Videos from inside Kerman Shelter show dogs jam packed together: tails wagging, bodies whimpering and quivering with excitement, voices yelping as they push over each other to make it to the volunteers with their wheelbarrows of food.

While the shelter opened around five years ago, the previous owners reportedly didn’t give the dogs adequate treatment, according to the New York Post.

Kerman’s volunteers have helped the shelter dogs since mid-last year, when they received permission from Kerman’s city council to help care for the dogs, Soma said.

The local government could not be reached for comment.

Since then, volunteers have separated the dogs by age and gender, with another separate area for moms nursing pups. They’ve also started feeding the dogs several times a week — mixtures of bread, vegetables, potatoes, and scraps.

With the COVID-19 pandemic still ravaging the world, Soma said they might have seven to eight volunteers show up “on a good day.”  Cooking starts early in the morning and takes most of the day, with scraps going into about 12 big dishes that the volunteers wheel out to the dogs.

Sick and vulnerable dogs eat first, Soma said. Then, the moms and their pups eat. A vet also comes in once a week or once every two weeks to check in on the dogs.

The situation is not perfect, but volunteers are doing their best, she added.

“It’s way better than it was before,” Soma said. “Before the dogs were so hungry they were killing each other and eating each other. It was the most heartbreaking thing.

“But now, they are fed, they get fresh water, the males and females are separated,” she continued. “We are doing the best we can, and we are trying to help the dogs.” 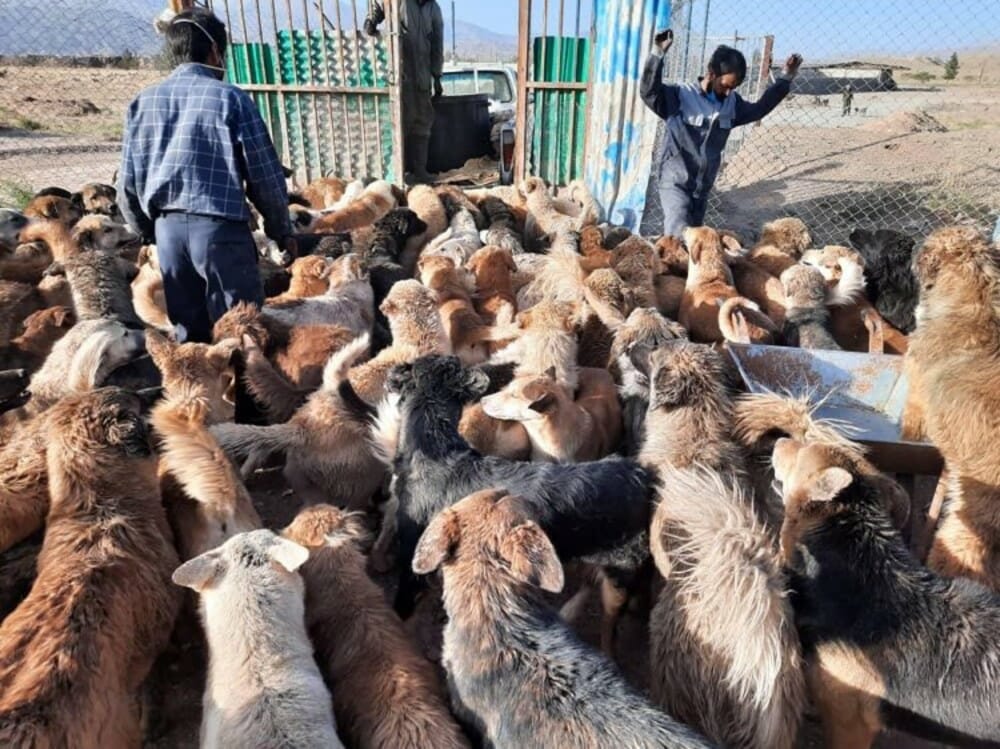 Many of Kerman’s residents have rough pasts. One dog arrived with gunshot wounds in both front legs.

“They shoot dogs in Iran,” Soma said, “but sometimes they don’t die.”

The dog has since recovered and flew to America to be adopted, via the U.S.-based rescue Paws 4 Thought, as have “20 or 30” other dogs who ended up with happy endings, she added.

Kathy Salehi, another U.S.-based volunteer, also has helped coordinate adoptions with homes in Canada via Loved At Last Dog Rescue.

Soma said she knows people have the heart to help Kerman’s stray dogs, who have rebounded quickly in loving homes. That includes Leo, her beloved canine companion whom she adopted from Iran.

“He was in such bad condition. There was no hope in his eyes,” she said, of her first impression of the dog. “I told her, ‘Maryam, I have to have this dog. I don’t care what it takes.’”

Leo’s journey to his forever home included travel to the Netherlands and altogether “too much red tape,” Soma said. Cross-country donations, as well as the adoptions, also have run into hurdles.

Iran has labyrinthine sanctions on charitable aid — endeavors considered “high risk” for humanitarian aid and even less likely to go through for causes supporting nonhuman animals.

But Doherty and Salehi have found a way to get the funds to Iran. Donations first go to a U.S.-based account via an online fundraising platform, then get transferred to Vancouver where they are exchanged and deposited into an account earmarked for Kerman.

Salehi, who also helps dogs in other parts of Iran, confirmed that donations made specifically to help Kerman’s dogs will only go to Kerman. The first priority is making sure the dogs have food. Any additional funds then will go to medical needs and spaying and neutering, she said.

Doherty said the desperation of the situation, along with the hard work of the volunteers and her hope for happy future forever homes for the dogs, keeps her going — even on the darkest days.

“I spend so much time on this, and most days I feel like I get nowhere,” she confided to Lady Freethinker. “It’s just so hard working with the language barriers and the sanctions. But with this way, it works, and the money can get there quick. It can get there the next day.”

Soma confirmed the fundraiser would work.

“Yes, it will work if they send the money to this fundraiser and then send it to Maryam, who deals with all the food purchase and costs,” she said via WhatsApp.

Driving all the hard work is hope for a better future.

“More than anything, I wish we could change the tide from dogs being perceived as unclean and there being a hatred for them, to showing inherent canine value within societies,” Doherty said.

Those who wish to learn more about the fundraiser supporting the feeding and care of Kerman’s dogs can do so here.