A young woolly monkey cruelly torn from her family by wildlife traffickers who planned to sell her as a “pet” now has a new home – and a new friend – at a sanctuary tucked into the Amazon rainforest, thanks to Animal Defenders International (ADI) and caring partners.

Chaska’s journey started at the Rescue Center El Reino del Machetero in Satipo, Peru, where she received a veterinary check. She then traveled more than 200 miles by truck to the Jorge Chavez International Airport in Lima, flew 630 miles to Iquitos, and then sailed to ADI’s monkey sanctuary, the Pilpintuwasi Animal Orphanage in the Amazon.

Fausto, a primate rescued from a restaurant in Peru, waited for her there – newly alone as his other monkey companions had passed. 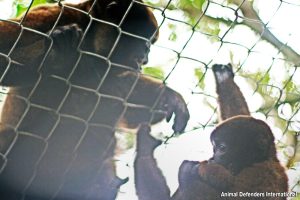 But before the two could meet, rescuers had to ensure that the much larger Fausto and the tiny Chaska would accept each other and get along. Chaska spent her first day at the sanctuary in a newly built “introduction” enclosure, where she munched on fresh fruit and peered curiously at the larger monkey who came over to investigate her.

A touching video shows the two communicating through the mesh of the enclosure, clearly pleased to see each other.

Then the day came. Rescuers lifted the door to Chaska’s enclosure, and the intelligent monkey quickly climbed into the larger space. Fausto soon discovered his guest and sauntered over.

A video taken by ADI shows him waiting patiently as Chaska grabs at his face and arms, then tries to climb onto his back. Footage then captures the two swinging upside down from the mesh walls of the enclosure and playing on a tire swing.

“Fausto is fully grown and huge compared to Chaska, but he was gentle, quiet and shy, and happy to see her,” ADI said in a press release about the monkey miracle. “Chaska was very excited and pulled at Fausto’s face, arms and body, clearly enjoying the touch of someone of her own kind – another being who understands how she feels and communicates.” 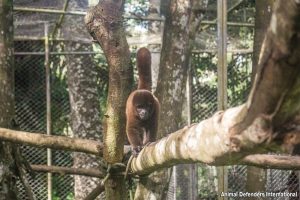 Primates are highly intelligent, emotional, and sensitive beings who typically live in complex social groups in the wild.

ADI’s other investigations – in Peru, Colombia, and Latin America – have highlighted how monkey families suffer when separated by wildlife traffickers in brutal operations, which often involve netting screaming animals, tying them up, and stuffing them into bags and boxes to transport them away from their forest homes.

While the investigative work can be daunting, happy stories like Chaska’s help the team at ADI find the courage to continue.

“Every now and again there is a touching and inspiring story to lift us up and keep us focused on the changes we make in the world,” said ADI President Jan Creamer. “Escapes like Chaska’s always bring us hope and light, knowing that we can win and take another step towards a better world for animals.”

Help monkeys like Chaska today—sign our petition to help monkeys abused and exploited for online videos—and share Chaska’s story with your friends and family! 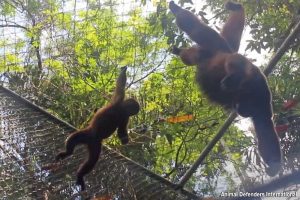 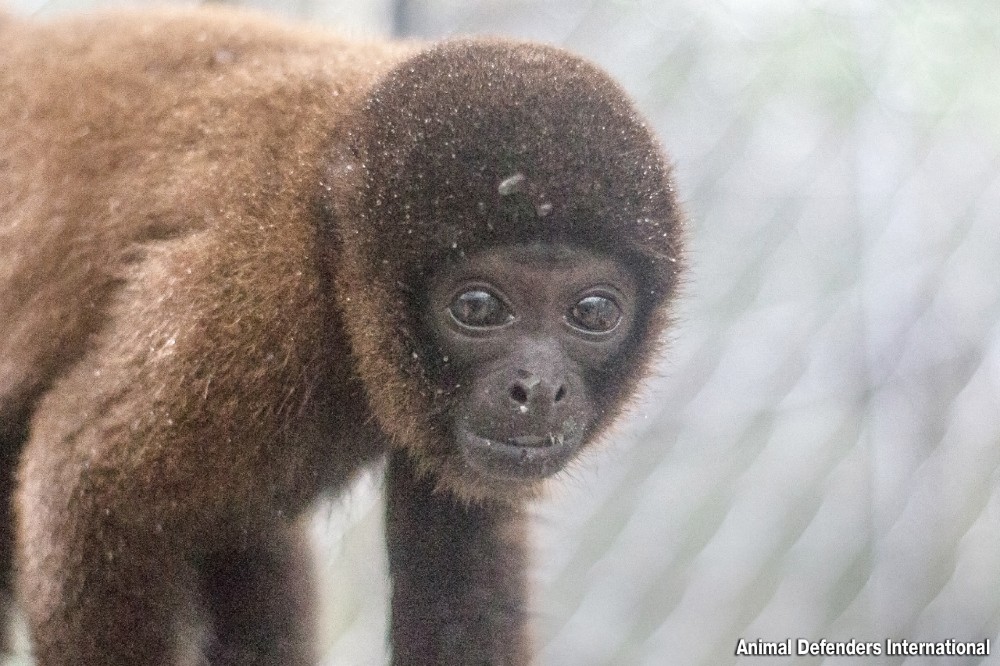