In Tanzania’s Tarangire National Park, an elephant herd has recently been blessed with a unique duo – twin calves named “Elon Tusk” and “Emma.” Twins are an extremely rare phenomenon among African elephants, accounting for a mere one percent of births. Additionally, the mortality rate among elephant twins is high, because mothers must provide twice the milk and twice the attention to provide for both babies. In other words, elephant twins defy the odds when both survive into adulthood.

Elon Tusk and Emma’s mother, Eloise, may be the oldest elephant on record to give birth to twins. The 57-year-old matriarch of her herd, Eloise has years of expertise to contribute to the success of her calves than a younger cow might.

Researchers for Wildlife Conservation Society, who study the Tarangire area’s elephant population, are closely monitoring the 8-month-old twins’ development. Elon Tusk and Emma are healthy and successfully sharing their mother’s milk; the brother and sister have both nearly doubled in size from their 200 pound birth weights. Eloise’s young are enjoying being calves – one of their favorite activities is playing in the mud with their friends!

Due largely to poaching, African elephants rank among the world’s most endangered species. In Tanzania alone, over 85,000 elephants were poached between 2009 and 2014. During this five-year span, the country lost 60 percent of its wild elephant population. For this reason, national parks and organizations such as Wildlife Conservation Society are invaluable.

Fortunately for Elon Tusk and Emma, Tarangire is one of the safest parks in Tanzania for African elephants, protected by park rangers, scientists, and tourists alike. In fact, while the rest of Tanzania’s elephant population fell, Tarangire’s grew by over five percent. Dr. Charles Foley, who oversees the Wildlife Conservation Society’s Tarangire Elephant Project, likes the twins’ chances: “We have high hopes for their survival. Every elephant calf born is a step towards the recovery of the species, and twins are even better.”

As animal rights organizations race against the clock to save these gentle giants from extinction, uplifting stories such as this one give us hope that someday, the species will once again thrive. 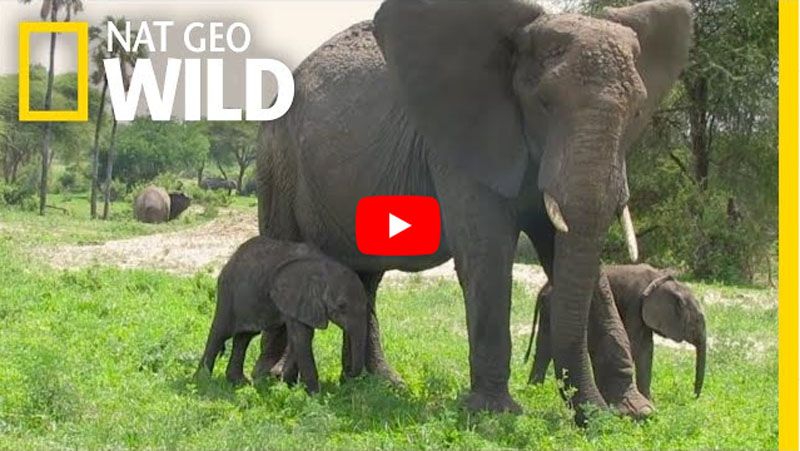