VIDEO: Adorable Dog Found Abandoned in the Woods is SO Excited to Go for Walks

Home » Animals » VIDEO: Adorable Dog Found Abandoned in the Woods is SO Excited to Go for WalksBy Katie Valentine | January 31, 2018

In this adorable and heartwarming video, a rescued Chihuahua named Poppy shrieks with joy when she knows her owner is about to take her for a walk! At first, Poppy’s owner mentions, she responded with a head nod, but now, she launches into an excited barking session.

The adventurous pup comes from more modest beginnings than you’d imagine considering her cheerful demeanor. Poppy was found in the woods at about 2 months old, weighing only 2 pounds. Sadly, it’s likely poor Poppy was abandoned by a breeder. The pup had her fair share of health problems, including three hernias and an overbite.

Despite her grim outlook, Poppy’s parents provided her with a loving forever home. The result has been nothing short of spectacular and Poppy has thrived: when her mom arrives home from work, the two act as if they haven’t seen each other in years!

At the end of the video, Poppy’s adoptive dad offers to take her for a walk. It’s clear that for Poppy, once left for dead in the woods, her life is now full of comfort and joy. And excitement! Poppy’s thankfulness for the simple things in life is a reminder of the importance of adopting rescue animals and the calibre of companionship they give back!

SIGN: Justice for Dog Hung on Fence and Set On Fire

Gus, Oldest Cat at the Shelter, Adopted by 101-Year-Old Woman and Her Family 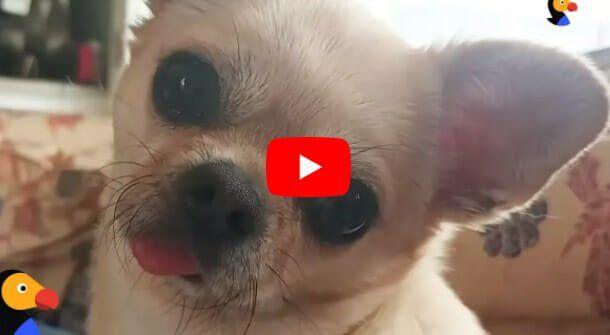 SIGN: Justice for Cowering Dog Punched Over and Over on Camera

VIDEO: Senior Rescue Dog Snuggles Into Her New Bed for the First Time With Forever Family