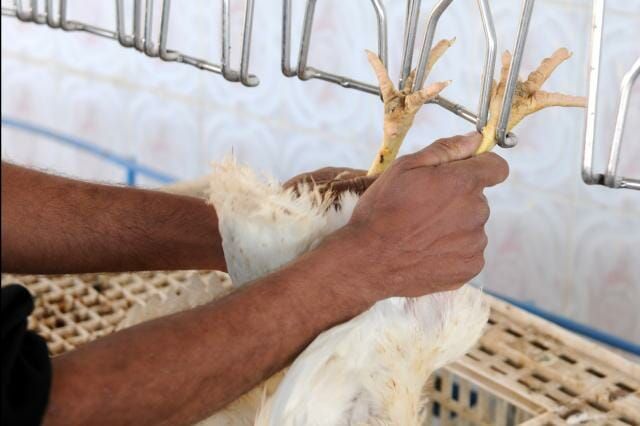 The National Chicken Council (NCC) recently presented the USDA with a new petition to legalize the cruel, reckless high-speed slaughter of poultry.

As if the brutal process isn’t quick and profitable enough for Big Ag, with over 140 chickens murdered every minute, the NCC wants to increase the casualty rate permitted by law. With the massive number of live chickens hung upside down, dipped in electrified water, slit at the neck, and plunged into boiling water in a sixty second time span, many aren’t properly handled, resulting in botch chop jobs and sentient animals being boiled alive.

Not only would this mean more pain for chickens, but workers would pay a price, too. On average, one Tyson employee per month already suffers from amputation due to the unrealistic speed they’re forced to work at.

Thankfully, the USDA has decided to reject the petition under the grounds that slaughter plants wouldn’t be able to maintain adequate safety.

We’d like to thank you for helping achieve this victory.

Over 100,000 comments were submitted to the USDA regarding this absurd proposal, and LFT’s petition alone received over 13,000 signatures.

Thank you for working with us for a more compassionate future. Thank you for putting love over convenience and for fighting for truth and justice.

Without your support, the humane world we’re creating together wouldn’t be possible. Your voice has been heard and will continue to be heard as we keep fighting for peace for every species.

And now, others are in need of our help. Though chickens are safe from increased slaughter rates, the USDA received yet another proposal to eliminate slaughter time standards — this time, for pigs. Similar consequences would emerge from this absurd proposal, so sign this petition to urge the USDA to reject high-speed slaughter of pigs.