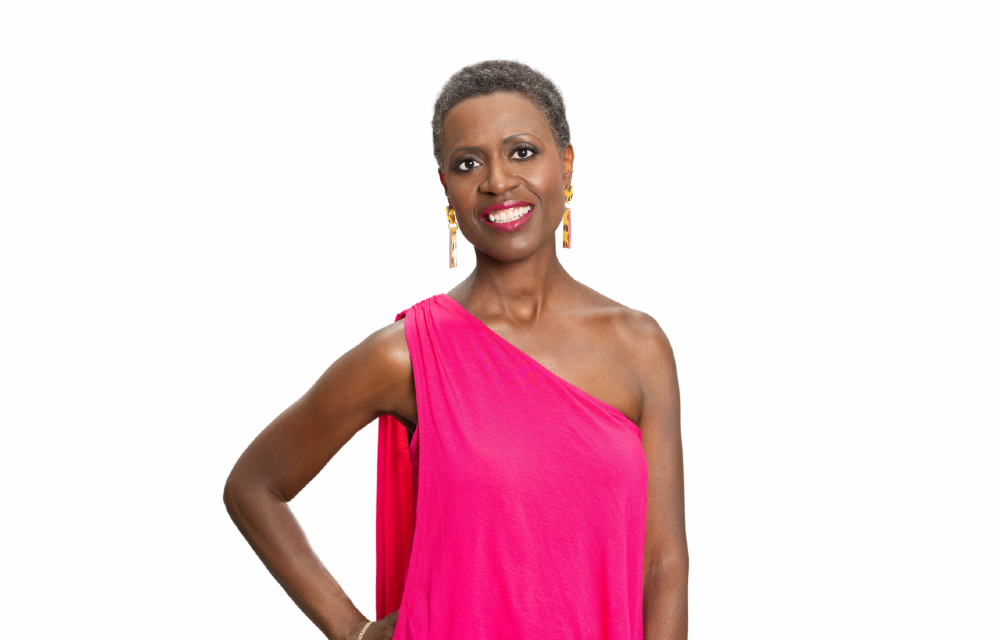 When human rights legend Dick Gregory visited Amherst College in 1986 to speak about the state of Black America, he forever changed the life of an unhealthy sophomore sitting in the wings.

Tracye McQuirter, now a vegan nutritionist and entrepreneur who is looking and feeling fabulous at age 54, told Lady Freethinker (LFT) she had gained 25 pounds in her freshman year at college.

Although her mother had raised her and her two sisters on healthy options like grains and greens, McQuirter early on had discovered “grease, fat, and sugar” at the home of a cousin. That unhealthy trinity had become her staple for life away from home.

But hearing Gregory’s talk — which she said was more about what was on the plates of Black Americans, who were suffering from much higher rates of chronic health issues like diabetes and heart disease — made McQuirter question her choices.

The pivotal talk included tracing the path of a hamburger — from a cow on a factory farm, to a slaughterhouse, to a clogged artery and heart attack — and made such an impression on the young McQuirter that she vowed never to eat meat again.

Her transition to vegetarian living lasted “about a week,” she said.

“I didn’t know what to eat or what to do,” she told LFT. “This was 1986, 10 years before we had the internet. I didn’t have any information. I was doing rice and pasta and bread and cheese and salads for a week, and I couldn’t sustain myself off of that.”

But she couldn’t get what Gregory had shared — about food choices, health outcomes, and the negative impacts of the broken food system on Blacks — out of her head.

That summer, she read everything she could about vegetarian living. She started experimenting with recipes. She became a vegan, and she brought her mother and sister on board.

Then she brought thousands of other women on board — with a current goal to empower 10 million Black women to try vegan living for at least 21 days, over the course of the next 10 years.

McQuirter’s mission has been covered by multiple renowned news agencies, including the New York Times, the BBC, the Washington Post, Forbes and Ebony. She’s picked up an impressive list of accolades, including Farm Sanctuary’s Compassionate Vegan Living Award, the Vegan Soul Superstar Award from Vegan Soulfest, the U.S. Animal Rights Hall of Fame Award, and being featured in the PBS Women Thought Leaders series.

She’s also published several cookbooks — including By Any Greens Necessary and her most recent Ageless Vegan — stuffed with healthy, delicious, and affordable vegan recipes.

McQuirter shares more about her journey, her passions, and how food and social justice are intertwined in the interview below. Responses have been edited for length.

You can also learn more about McQuirter on her website, or check out her downloadable vegan guide here.

A Q&A with Tracye McQuirter, Vegan Chef, Entrepreneur, and Nutritionist

Tell us more about your background and your early attitudes against eating healthy.

For me, being vegan was unexpected. I was the youngest of three daughters, and my mother raised us. She was divorced and working, so we cooked for as long as I can remember. Dinner had to be ready when she got home, so we learned to cook very early on. My mother was health conscious as an omnivore, so we didn’t have junk in the house. We didn’t have a lot of processed food. We had Total cereal; we had skim milk; we had whole wheat bread; we cooked from scratch.

I hated it. I hated vegetables, anything green, anything I was told was healthy… I didn’t want it. I wanted greasy, and creamy, and sugary. But my mother planted the seed for healthier eating, for sure.

I had two teachers in seventh grade who were vegetarian, and they wanted our camping trip to be vegetarian. I thought that was a horrible idea, so I wrote a petition against it. So I was really anti-vegetarian, anti-healthy.

Seven years after that, I was a sophomore at Amherst College. Our Black Student Union brought Dick Gregory to talk about the political, economic, and social state of Black America, and instead he talked about the plate of Black America and how unhealthily most folk eat, and why we should become vegetarian. He was talking about it in the context of so many things beyond food, that were related to food, and that I knew nothing about. He talked about social justice, factory farming, the USDA, the food industry, and sustainability. I felt like it was an intervention that he came at that time.

I took my junior year away from Amherst, and I went to Nairobi, Kenya, for the first semester, and then Howard University for the second semester. For the first semester, I could not be vegetarian, because when I signed up for the program months before, I wasn’t a vegetarian and so they weren’t prepared for me. Part of the experience there was a 2-week safari; we saw them kill live goats, their blood drained, chopped up. We also went to a restaurant called The Carnivore where they allowed people to have the animals that they had killed served to them. We didn’t kill any animals, but one of those animals was served to us, which looked like a gazelle roasted over a pit hole. They brought it to our table and began to carve it, from head to hoof, and it was in that moment that I was disgusted and I said that I would never eat another piece of meat.

What changes did you notice in yourself after you went fully vegan?

I feel like that Dick Gregory lecture was an intervention in my life. Who knows where I would be, what kind of diseases I might have, what kind of unhealthy weight I might be dealing with, if I hadn’t gotten that early intervention. Gaining 25 pounds in one year… if I had continued, I was definitely on that path. 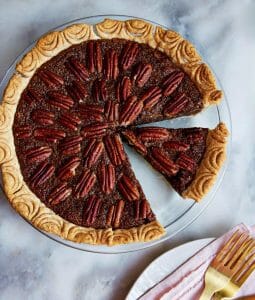 How did you make the jump from going vegan for yourself to helping others transition to plant-based lifestyles?

We started getting questions from family and friends and co-workers about what we ate. We just started answering people’s questions. People invited us to their health fairs and to their churches, so we decided to create a nonprofit and do this on the side. We had full-time jobs, working 50-60 hours a week, but in our spare time we were cooking, doing demos, giving talks, going to people’s homes. We really enjoyed it. We created Blackvegetarians.com. That’s how we started sharing with others; we were asked to do it.

At a certain point, I decided that I liked doing this more than museum work, although I loved doing museum work, and I decided to change professions. I wasn’t expecting that, but that was what happened.

I saw my family members getting sick, and some of my friends, in their 30s, getting sick, and I knew that this was a way out. It’s unacceptable to me that Black women have the worst health outcomes in the country. For me, this is a way to reverse that, for us to take back control of our health.

How do your passions for food and social justice intersect?

People don’t realize or think about how much influence the federal government, the USDA, and these big processed food companies have over what they eat. They determine what is available in our communities. Food is inherently political; folks who are affluent, who have money, have the best access to healthy food. Where the folks have the least amount of money, the least amount of resources, by design, they have the least access to healthy food. That is how the system works. So it’s inherently intertwined.

Blacks are the fastest growing vegan population. There are all these reasons to do it. We have the worst health outcomes. [There’s also the question of] who is working in these fish factories, in these hog farms in North Carolina and South Carolina: it’s low-income Black folks. And whose communities are being affected [from pollution and contamination from intensive agriculture operations in] the waterways, the air, the noxious species in the air and the water and the land: it’s low-income people of color. That’s why these issues are inseparable, why you can’t separate this whole system and how this food is produced.

Whether I’m teaching at a university or a low-income housing community, it’s the same conversation that I have. I find that as soon as people make the connections or hear what I am saying, instantly they get it and they want to do something to change. It’s not insurmountable for people.

What does that conversation look like? What do people ask you?

The questions that come up most frequently are, “Why haven’t we been taught this? Why don’t I know this? Why isn’t my doctor telling me this?” The other questions, next, are, “What do I eat? What do you eat? What should I eat?” That goes to “What can I immediately do to change things to take back control?”

It depends on the community that I am in, but I will ask people what are their favorite foods and what a typical meal looks like, and then I share how many of those foods are vegan. If you’re eating beans, if you’re eating nuts, fruits, grains, and veggies, you are already eating vegan food. It’s not unfamiliar; you just maybe haven’t called it that. I ask people what is available to them, community gardens or health food stores. I give resources, like HappyCow.net.

Are you hopeful about the future of plant-based eating and people making the shift?

I have always known that [plant-based eating] is going to increase. It’s logical; it’s common sense. It’s healthy. It’s a win-win-win, and more and more folks are going to get it. If I got it, as anti-healthy food as I was, anybody can do it.

What’s next for you? Do you foresee continuing to raise awareness about the benefits of vegan living?

I launched a nonprofit organization this year called Ten Million Black Vegan Women. Our goal is to help a million Black women a year, every year, to go vegan. And that means to at least go vegan for 21 days, in our free 21-day online program, so they can experience the health benefits for themselves.

I feel like I am going to be doing this for the rest of my life, but definitely going hard for at least the next 10 years. I wanted to do something that was worthy of my time and my interests and passion. At this point, it isn’t enough to help people one on one. I want to go for it and help as many women as possible. 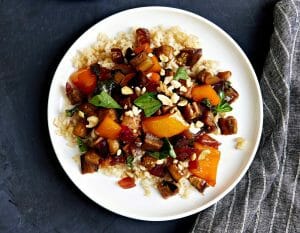