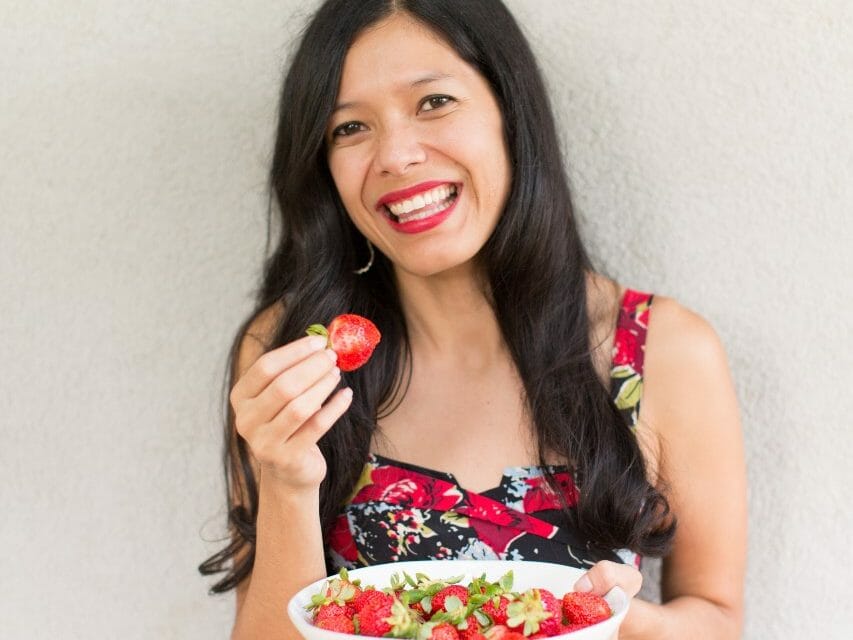 For Toni Okamoto — author and founder of Plant Based on a Budget — the choice to go vegan started with a high school track coach and, later, health concerns.

Okamoto recalled dining on canned beans with hot dogs, Bagel bites, and frozen pizzas while camped out in front of a TV with her dad, who completed his military service when she was 12.

When she started high school, she thought nothing of ordering two beef burritos from Taco Bell as her “go to” meal before track practice, even though she got sick every time.

Her coach was the person who planted the seed that she should cut back on fast food, and red meat especially.

But it wasn’t until she went to college, connected with vegan friends, started going to plant-based potlucks, and volunteered at Grass Valley — a California-based animal sanctuary — that the benefits of a plant-based diet for the animals really sunk in.

But life put a few hurdles in her way. Okamoto said she was “very poor” — living with two other people in one room, functioning without a car, and working two jobs to make ends meet.

She also came from a rich cultural heritage — her grandmother was Mexican, her grandfather was Japanese — where giving and receiving food equated to expressing love, and rejecting offered food was seen as a sign of disrespect.

But then Okamoto lost an aunt to Type II Diabetes. She lost a grandfather to complications from a triple bypass surgery. She almost lost an uncle, who suffered a heart attack.

She noticed a similar pattern of health problems afflicting people in the predominantly Mexican American neighborhood where she grew up, where meat-heavy diets prevailed.

Her mission became to make healthy, vegan eating practical and less intimidating for people unfamiliar with plant-based cooking — or cooking, at all.

“Plant Based on a Budget” — her first cookbook with easy, affordable, and delicious meals that people can make in less than 30 minutes for less than $30 of grocery money each week — resulted from her cumulative experiences.

But the project grew into a movement, and one that attracted vegans and omnivores alike– with about 55 percent of Okamoto’s current audience self-classifying as “non-vegetarian” or “non-vegan.”

Founded in 2012 in Sacramento, Plant Based on a Budget now has videos, free meal plans, articles, and nearly 800 free recipes online for those who want to expand their compassionate cooking horizons.

“We’re not advocating a political agenda, and we’re not making a list of things you shouldn’t eat,” Okamoto wrote on her website. “We’re just a bunch of people who love food and cooking, and want to share some of the recipes and tips we’ve learned along the way. More than anything, we think that everyone should be able to cook delicious, healthy food without spending a fortune.”

A Q&A with Toni Okamoto, Founder of Plant-Based on a Budget

Tell us more about the start of your shift toward plant-based eating.

My vegan journey did not begin with animals. It began with health. When my dad got out of the military when I was 12, I went to live with him and we lived a full-on bachelor life. We ate canned beans with hot dogs and frozen pizzas and bagel bites. My diet had totally changed. It was my coach who first suggested not eating so much fast food and so much red meat in particular. I had never made the connection that what I put in my body was going to impact how I felt. I had only thought about it as sustenance and taste. It was then that a seed was planted for health reasons.

How did your decision to go vegan go over with your family?

I think they thought it was a phase. When I first decided to end eating red meat, they were like, “Oh my gosh, how did I end up with a hippie daughter? God has cursed us, what happened?” From there, I think they continued their disappointment.

In the beginning it was a bit of a rejection to their food, and that is a No-No in both cultures, Japanese and Mexican. The way you expressed love is through cooking. So for gifts, or if someone is celebrating something, you make them a big meal and when you say, “Oh, actually I don’t eat anything you prepared for me,” it is a sign of disrespect. Culturally it was a difficult transition, but over time, and with grace and patience on both of our ends, they have now managed to learn what I eat and what I don’t eat, and respect, support, and accommodate me and have even made subtle changes themselves.

Now, as veganism is trending, they’re like, “Oh, my daughter has been vegan for so long! She showed us the Beyond Burger a long time ago!” So it’s funny to hear the difference between 15 years ago and now, when [veganism] is becoming more mainstream and more widely accepted, and people know how to pronounce it… it’s just really interesting to hear the difference when they communicate their thoughts on vegan living.

Have you ever faced racism or discrimination because of your heritage?

I have been fortunate to grow up in a city that is incredibly diverse. Everyone for the most part has gotten along. When you are surrounded by people who are different from you, you are more tolerant, and you get to know people individually and learn to appreciate them for who they are and not their racial background.

I appreciate that I have not experienced a lot of hate and racism growing up. It doesn’t mean I haven’t had isolated experiences while traveling, or smaller experiences where people say something.

However, when Asian people started getting attacked earlier this year, it was the first time I felt afraid. I didn’t feel afraid until my family started calling me and they’re like, “Hey, just so you know, you should be really careful when you are going out, because in Sacramento, there have been hate crimes against Asian people.” They were particularly worried about me, and their fear for my safety began to weigh on me, too. It made me feel like, “Oh gosh, should I be worried? Is walking to the grocery store safe for me?” and that’s a very awful thing.

I encourage everybody to think about what they say and how they act and what they do before doing it. Sometimes racism comes out in the smallest little comments.

How did working at the animal sanctuary impact you?

I went in thinking, “Oh, I’m not really an animal person. I don’t believe that they should die for our food and suffer tremendously before that, but I’m not really desperately needing attention from animals.” But once I was there, I really bonded with certain individuals on the farm.

The weekend I started, a goat was rescued, and she gave birth on my first day. To be around these new little babies, to watch them grow up and learn their personalities, and to see how much they were like the companion animals that I grew up around was fascinating to me. I didn’t think I was an animal person, but it was because I didn’t know different species of animals; I only knew the dogs I had as pets. I just didn’t have that connection. When I met them more intimately and got to see them grow up, it was fun.

The other really distinct relationship I formed was with a cow named Stanley. He was an angus steer, and he was a calf when he was brought onto the farm. His mom was on a farm being raised for slaughter. He escaped during a thunderstorm and was found collapsed on the side of the road. Highway patrol found him and brought him to animal control, where we then gained custody.

He was terrified of everyone, and at that time I was going through a really bad breakup and I was distrustful and very depressed. I would go out on my lunch break and eat in his pasture. He would sit in his corner, and I would sit in my corner, and we would just be together silently. Over time, we’d get a little bit closer, and then one day as I ate lunch, he laid his head on my lap.

He began to trust me, and I began to trust people. It was such a healing experience, and I learned a big lesson from Stanley that bad things can happen and you can still love and trust. It takes a little bit of time and space, but it can happen.

What has been difficult about inspiring people to eat more plant-based?

You constantly hear, “I can’t do it because it’s too expensive,” and that is frustrating, especially because I was on a very, very, very tight budget for a really long time. I was making it happen, and I was frustrated that people thought they couldn’t do it because they were on a limited income.

What has been rewarding about your journey?

The fact that I have not only been able to change my situation, but I’ve also been able to employ people, and then I also help people save money in their own lives, is the most beautiful part. The other part is that 55 percent of the people who are part of my audience are not plant-based; they are not even vegetarian, and the fact that I have access to their attention and that I’m encouraging them to eat more plant-based means that more animal lives are being spared. If they have the option to eat chicken tacos, but they saw on Instagram these tofu tacos and are inspired to make them, that’s one person whose whole family would have been eating meat for that meal. I’m really proud of that.

For your readers who care deeply about animals, every meal that you make that is plant-based saves animals, and it really matters. Even if it is only one meal per day, or a ‘Meatless Mondays,’ keep trying. It makes a difference. And if you mess up and you don’t meet your goal, that’s okay. You can continue tomorrow and make a difference. 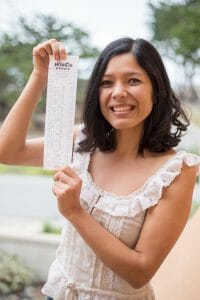