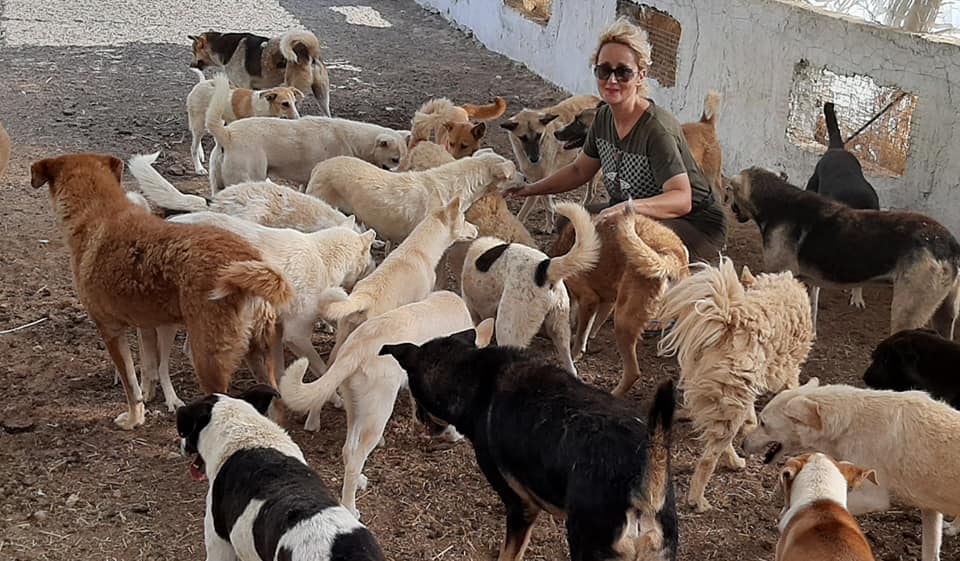 When Tiziana Gamannossi rented land in Djerba — an idyllic island off the coast of Tunisia in Africa — she had a dream of creating a safe haven for dogs.

Her dream manifested as La Refuge Terrabella, a mostly unfenced stretch of desert outside the island’s touristy downtown area, where she cared for about 200 stray dogs.

Italian born, Gamannossi had grown up with animals. She always loved them. So the hatred that many Tunisians displayed toward the dogs — and toward her, her husband, and her volunteers — came as an unwelcome shock.

Gamannossi explained that the majority of people in Tunisia see dogs as “vermin” — animals to be collected and killed. The culture clash came to a vicious head in July 2020, when Gamannossi’s morning rounds at her sanctuary showed that someone had broken into the sanctuary and more than 20 of her dogs and puppies had been massacred.

The news covered the crowds that gathered outside of a destroyed Terrabella the next day, chanting, “Death to dogs, death to foreigners,” as Gamannossi and her volunteers scrambled to save the survivors.

The news also covered how community members showed up at the local police station, demanding the release of the three suspects taken into custody for allegedly committing the atrocities, and how those suspects then walked free.

Yet despite the death threats, rumors, criticism, and lack of accountability that followed in the wake of the shelter attack, Gamannossi’s dream did not die in Djerba.

While her road to rebuilding over the last six months has been rocky, Gamannossi said she isn’t giving up.

“At the refuge, we continue our fight for life, a fight against several visible and invisible enemies,” Gamannossi posted to her personal Facebook page in January. “We have to keep going because they only have us, and for us they are our family.” 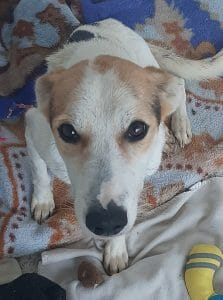 Betty, one of the dogs who survived the July attack on Terrabella. (Photo Courtesy of Tiziana Gamannossi)

Tunisia is a country in the Maghreb region of North Africa, bordered by Algeria to the west and southwest, Libya to the southeast, and the Mediterranean sea to the north and east.

Off the coast is Djerba — a popular tourist destination due to its sandy beaches and crystal waters — where locals aren’t fond of stray animals. National news has reported that “cleansing vans” routinely round up and kill strays when the tourist season starts.

“Here for [the dogs], it is a war,” Gamannossi told Lady Freethinker. “Most people in Tunisia hate these dogs. And for us, the people who try to protect them, it is also a war.”

Gamannossi’s business career originally brought her to Libya, where she survived the First Libyan Civil War in 2011 and a 22-month incarceration starting in 2016.

She ranks the attack on Terrabella right alongside those nightmares. She noted on her Facebook page that the dogs — which she calls her “loulous,” the French word for “darlings” or “sweethearts” — were “killed twice, by both carnage and the country’s indifference.”

The days following the attack were a whirlwind as Gamannossi tracked down escaped strays in Djerba, searched for a new safe haven, and fended off rumors and people trying to profit from Terrabella’s misfortunes. 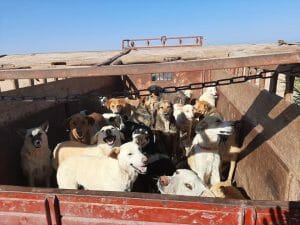 A photo showing the relocation of dog survivors of the Djerba attack to a new safe space in the mountains. (Photo Courtesy of Tiziana Gamannossi)

Even connecting with those who seemed like friends initially — including several other rescue groups who offered to help care for the dogs — led to fall outs when Gamannossi wasn’t satisfied with what she saw.

Gamannossi said that one group started raising funds for the dogs — not a cent of which she saw go toward helping the animals. A visit to another that had agreed to house the animals found them in what Gamannossi called a “filthy pension.”

“They were like in a jail,” Gamannossi told Lady Freethinker. “I didn’t want them to be in jail, because I suffered in jail. I wanted them to be free. For me, the shelter has to be like their house, where they can enjoy their lives while they wait to be adopted.”

But there were bright spots, saving graces from friends and supporters that Gamannossi fondly calls her “angels.”

A friend, living on a farm in the mountainous village of Takrouna, offered space for her to build a temporary shelter for the dogs — fenced, this time, but where the dogs could still run free.

Several clinic veterinarians offered free spaying and neutering and vaccinations. Donations of bed sheets, Kibble, duvets, dog sweaters, and mattresses trickled in, mainly from Gamannossi’s angels in France, Belgium, and Germany, fanning the fire in her heart to continue her work.

“You destroyed Terrabella’s dream on earth,” Gamannossi wrote to the destroyers in French on her Facebook page in August, shortly after the attack. “But our love for our darlings, our tenacious and true friends, will help us rebuild a new paradise where [the dogs] will be happy and can wait quietly for an adoption.” 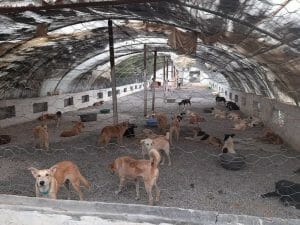 One of five enclosures at the new dog refuge in Tunisia. (Photo Courtesy of Tiziana Gamannossi)

A New Start in the Mountains

The majority of the dogs from Terrabella are now safe with Gamannossi in Takrouna.

Only about 10 of the original stray Djerba dogs remain scattered somewhere across the island’s vast expanse, evading Gamannossi’s efforts to find and reclaim them.

Gamannossi ran into road blocks trying to register Terrabella as an official association in Tunisia. She said her lack of permanent residency in Tunisia or paperwork related to a salary — the shelter runs on donations — delayed the process, although she added that Terrabella’s paperwork had been set to clear in August.

This time around, she’s registered her shelter, under the new name “Tunisian Small Souls,” in France, where she has on-the-ground volunteers who can conduct home visits prior to pending adoptions from prospective dog guardians.

The agency, officially registered in August 2020, has faced both financial and COVID-related challenges. Saving as many dogs as possible remains her priority, followed by vaccinating and spaying or neutering them.

Getting the former stray dogs tested for rabies, prior to adopting them out, has crawled along, delayed by travel- and lab-related restrictions due to COVID-19, Gamannossi said.

While she’s only adopting Tunisian Small Souls residents out to approved French adopters currently, she hopes to start adoptions elsewhere once she has more on-the-ground support.

“I want to be sure they will go to good homes,” she said.

Céline Venet-Boussâa, the president of Tunisian Small Souls and who helps coordinate adoptions in France, said in a Facebook post that the work the organization is doing is “huge.”

“It’s seven days out of seven, early morning to late night,” she wrote. “That’s why their heart for animals can’t be questioned.” 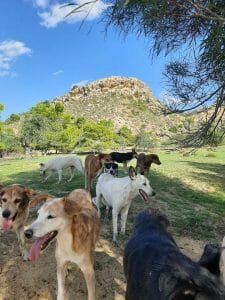 Former stray dogs in Djerba delight in a walk in their new temporary home in the mountainous Takrouna. (Photo Courtesy of Tiziana Gamannossi)

Despite the hardship and controversy she has faced, Gamannossi said she’s still committed to making her safe haven a permanent reality for Tunisia’s stray dogs.

She and her husband are looking for a permanent place in the more dog-friendly city of Sousse to set down the shelter’s roots, as part of a 20-year plan she hopes other cities and countries overrun with strays will someday replicate.

“If you want to give an alternative to slaughter, create projects like mine for Terrabella where dogs were free, fed, and cared for,” she said. “I had found a solution.”

Gamannossi said she plans to file a claim with the country’s court system after she has recovered her remaining dogs from Djerba; she fears that doing so before then would cause the community’s residents to “revenge themselves” on the dogs.

She said that some day — when she finds time — she also wants to write at least three books about her life, the Libyan war, her almost 2-year incarceration, and her animal rescue work. The profits from the books would “of course go into the shelter,” she said.

Meanwhile, she’s focusing on the good and her mission.

“I would like to thank all the Tunisians who supported us and are strongly supporting us — this is the real Tunisia we love!” she posted to Facebook in September. “Criminals like Terrabella’s assassins and their agents are just the bad side that we have to fight, all together, for justice.”