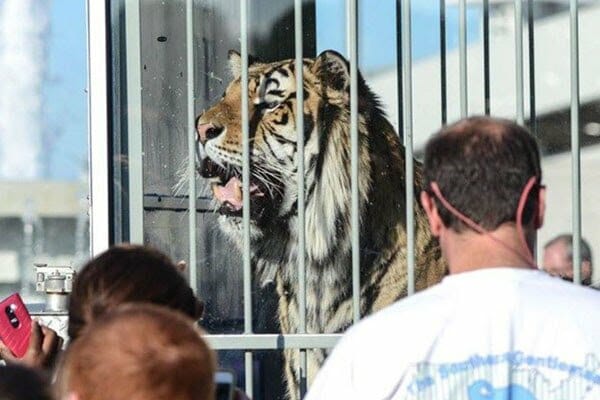 For nearly 50 years, the University of Memphis has brought live tigers to its football games, subjecting the animals to the stress of thousands of screaming fans. But following the sudden death of its most recent mascot TOM (Tigers of Memphis) III and persistent criticism from activists and the public, the university will end its cruel and inhumane practice.

TOM III, a 450-pound Bengal tiger, passed away at age 12 after falling ill, according to a statement by the university. Efforts to end the use of live tiger mascots precedes his illness, however, with nearly 10,000 people asking university officials to stop carting TOM III to football games.

“We’re deeply saddened by the death of TOM III,” Lisa Levinson of In Defense of Animals said in a press release. “It’s unfortunate that captivity was the only life he ever knew. His death is bittersweet in that he never got to experience life in the wild, but we’re grateful that University President M. David Rudd decided TOM III will be the last live tiger the University of Memphis ever trucks to football games.”

TOM III was forced to sit in a cage at the south end zone during football games and entertain crowds of people at the “Tiger Walk,” where fans marched around and took photos with him. This inhumane practice started in 1972 with TOM I.

Having a live tiger at football games is cruel for the animals (who have to endure loud crowds of screaming fans), undermines conservation efforts for big cats (who belong in the wild and not in cages for entertainment), and present public safety risks.

Unfortunately, the university is still committed to having a live tiger mascot, TOM IV, who will live at the Memphis Zoo, reported the Memphis Commercial Appeal. This tiger will never go to games, but animal welfare groups are calling on the university to sponsor a wild tiger instead and make a positive impact for wildlife conservation.