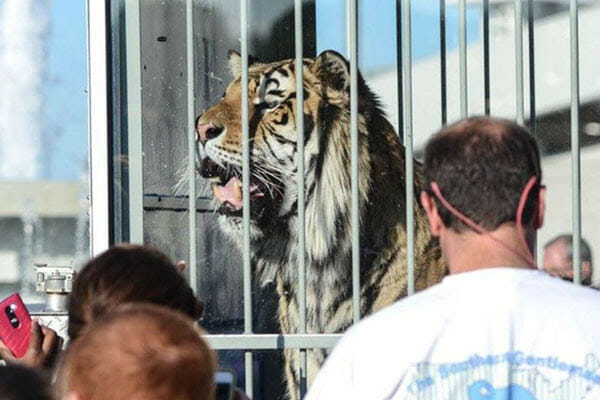 Several animal welfare organizations and more than 10,000 members of the public are asking the University of Memphis to stop its outdated tradition of using a live tiger mascot at its sporting events.

Forcing the captive animals to entertain stadium fans since 1972, the Tennessee-based university is the only U.S. college to still parade around tigers in front of jeering, chaotic crowds.

Louisiana State University, the only other college in the country to have a live tiger mascot, suspended the tiger’s presence at football games in January 2017 following an escape that resulted in public safety hazards.

The tiger, who just turned 12 years old, is trucked to football games in a $40,000 steel and glass trailer and sits near the south end zone. He also endures fans crowding around his cage to take selfies before and during the university’s “Tiger Walk,” where fans gather on Tiger Lane and march before the start of the game.

Lisa Levinson, the wild animals campaigner for In Defense of Animals, said the university’s tradition of allowing fans to take pictures with the captive tiger sends the harmful message that wild animals belong in cages for people’s entertainment, rather than in their native habitats.

“Forcing wild animals who are very sensitive to their surroundings into crowds of screaming people is stressful and cruel,” Levinson said in a press release. “It’s time to leave TOM III at home, instead of carting him around to attend games.”

Marilyn Kroplick, the nonprofit’s president, noted the university already has an alternate mascot — a human in a tiger costume named Pouncer — ready to step into the spotlight.

“President Rudd, this is your golden opportunity to launch an educational and ecologically sound campaign to keep wild animals in the wild,” Kroplick said in the organization’s petition. “Please announce your decision to end the use of live animal mascots, and bring Pouncer to future games while leaving TOM III at home.”

PETA made a similar plea in 2017, after a tiger attack during a Las Vegas magic show highlighted the dangers of using captive wild tigers for entertainment.

“Costumed human mascots can lead cheers, react to the crowd, and pump up the team—all things that a frightened animal can’t do,” PETA said on its website. ““Nothing says ‘Go, team!’ less than an unhappy animal, and as athletes and fans raise a ruckus on and off the field, there’s no reason to subject a real animal to the stress of being a school mascot.”

The Highland Hundred football booster club, an organization representing University of Memphis alumni and Tiger fans nationwide, and members of the Tiger Guard are the licensed caretakers for TOM III, along with his predecessors TOM I and TOM II. The organization’s website applauds TOM III’s size as “worthy of the University he symbolizes” and also justifies the wild tiger’s captivity as a means to educate people.

“His presence presents constant opportunities to educate Tiger fans young and old through the preservation of one of the world’s most recognizable endangered species,” the website reads.

In Defense of Animals said the status of tigers as an endangered species means they’re in need of increased conservation efforts in the wild, not exploitation for entertainment while being deprived of their natural habitats.

The nonprofit noted TOM I lived in a person’s garage in the earliest days of his mascot ‘career.’ TOM II also lived in a private residence for months before being transferred to a park.

Even TOM III — who spends his time away from the football field in a $700,000 enclosure — is denied the space necessary for him to roam and the independence he would have as a tiger in the wild, the nonprofit said.

University of Memphis’ President M. David Rudd and the university’s press team did not respond prior to publication of this story.