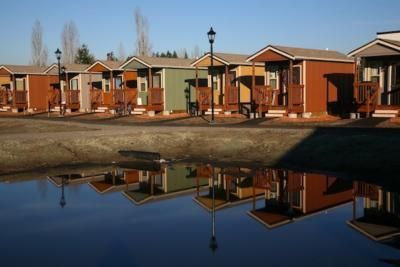 The United States Department of Housing and Urban Development (HUD) estimates that 549,928 people in the United States were homeless in January 2016. A quarter of those were children. Move For Hunger reports that almost 48,000 — or 8.5% — of all homeless persons are veterans. Also, nearly 20% of the homeless population has serious mental illness or substance abuse issues. The two major causes of homelessness are lack of affordable housing and poverty. Tragically, homelessness can be fatal due to poor health, exposure to the elements, violence, drugs, suicides, and being run over by cars.

In an effort to help combat the problem, communities of tiny houses are cropping up in cities across the United States. These usually-temporary dwellings enable homeless people to live in safe, clean quarters with utilities and food. These establishments employ social workers to help the homeless find jobs and permanent housing.

A community in Newfield, New York called Second Wind Cottages was developed by a faith-based organization, but people of any religion are welcome. Volunteer labor and donated building materials keep costs low; they estimate that each house cost $15,000 to build. They say their mission is “to house and walk with people toward restored lives.”

Quixote Village in Olympia, Washington houses 30 previously homeless adults. The cottages have 144 square feet interiors, each costing $19,000 to build. A community building with a shared kitchen, dining room, living room, showers, laundry, offices, and meeting space allows the individual homes to be smaller and more affordable. The entire village is on 2.17 acres. Each cottage has a personal front yard, and there’s a large community vegetable garden. Residents are typically recovering from drug and alcohol issues, and the village provides a safe space for recovery.

In Austin, Texas, you’ll find a community of small houses for homeless people called the Community First! Village. The compound includes an area for study, a memorial garden, medical facilities, walking trails, community gardens, an outdoor movie theater, WiFi, a community market, and even a bed and breakfast. Near the Capital Metro bus stop, Community First! Village describes the community as a “transformative residential program [that] exists to love and serve our neighbors who have been living on the streets, while also empowering the surrounding community into a lifestyle of service with the homeless.”

Madison, Wisconsin is the home of Occupy Madison Inc. During the Occupy Wall Street demonstrations in 2011, a group of students, activists, academics, radicals, and concerned citizens in Madison protested in solidarity, and decided to build a community for homeless people in their area. Ninety-nine-square-foot houses were constructed, and the group created a permaculture so the members grow their own food and become sustainable as well as self-sufficient. Students from a nearby high school helped them with construction. They have a greenhouse and a store, and are building a new store so they can convert the old store into offices.

Dignity Village in Portland, Oregon consists of forty-three little houses built from recycled and reclaimed materials. Each unit has a bed and a propane heater, and residents pay $35 rent per month. Private donations and small business profits support the village. The residents need to adhere to the following rules: “…no violence, no theft, no alcohol or drugs within a one-block radius, no constant disruptive behavior, and all residents must contribute at least 10 hours per week of work for village upkeep.”

Another community, named The Village of Hope,was built in Fresno, California. A shantytown of homeless people had sprung up at the location; police and residents in the area noticed a lot of crime, and the tiny house community was created as a solution. This village consists of tiny prefabricated overnight shelters. Residents are counseled on education, life-skills, training, substance abuse, and mental health. Donations pay the bills for The Village of Hope, where 124 people can stay in a given time. Their tenet is, “1. Take care of yourself. 2. Take care of others. 3. Take care of this place.”

In Dallas, TX The Cottages at Hickory Crossing is comprised of fifty 400 square-foot cottages. Each has a kitchen, bathroom, and bedroom, and residents receive mental and medical health services. Central Dallas Community Development Corporation worked together with City Square to build the community, and the residents are permanent.

Another small home development for homeless people is CASS Community Tiny Homes in Detroit, Michigan. The homes are between 250 and 400 square feet, and are rent-to-own at $300 per month. Ford contributed $400,000 to this project, and other funds were collected from organizations and companies in the area. During the official housewarming of the development, John Greenon, Executive Director of Central Dallas Community Development Corporation, said “…each Cottage resident receives a key to his new home. The key represents control and ownership. It belongs to the person who lives in the home. They regain control of their living space, ands they regain control of their lives.” CASS Community Tiny Homes also has rules of conduct, like most others.

A Tiny Home for Good is located in Syracuse, NY. Houses for homeless veterans were built on vacant public lots. The 300 square-foot houses have a living room, bed, kitchen, and bathroom. Professional care managers are available to help veterans find employment and permanent housing. Rents are offered on a sliding scale depending on income. The builders of A Tiny Home For Good partners with local businesses and contractors. Community members also help construct houses.

My Tiny House Project LA  in Los Angeles, CA is interesting in that it fundraised with a Crowdfunder campaign. My Tiny House Project is made up of more than 40 50-square-foot homes with portable camping toilets, wheels, and solar panels on the roof. They are working on creating a community garden and building mobile showers. There’s also a program for innkeeper training to help people learn job skills. Forth and fifth graders from a local charter school are helping with the construction. 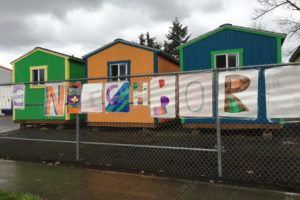 Othello Village in Seattle, WA is a joint venture between the city of Seattle and the Low Income Housing Institute. There are eight 100-square foot homes. Two similar encampments were built nearby. They house 160 people: singles, couples, seniors, veterans, families with children and people with pets. Thousands of other people have been helped in the short term staying for a night or a week before venturing onward.

In Nashville, Tennessee, Infinity Village was established by an interfaith group called Infinity Fellowship. A construction company in Memphis partnered with Infinity to build six colorful 60 square-foot shelters. The houses have murphy beds, mini-fridges, a microwave, and hybrid heating/air conditioner. They raised their capital on GoFundMe.

These tiny house communities aren’t able to house all the homeless, but they are a good start.  Their determination and compassion help keep formerly homeless people safe, satisfy their basic needs, and even provide services to help them to find jobs and move forward to the next phase of their lives.