Home » Animals » The Pirates: A Story of Two ‘Wild Dogs’ and Their Second Chance at LifeBy Cindi Scholefield | October 16, 2020 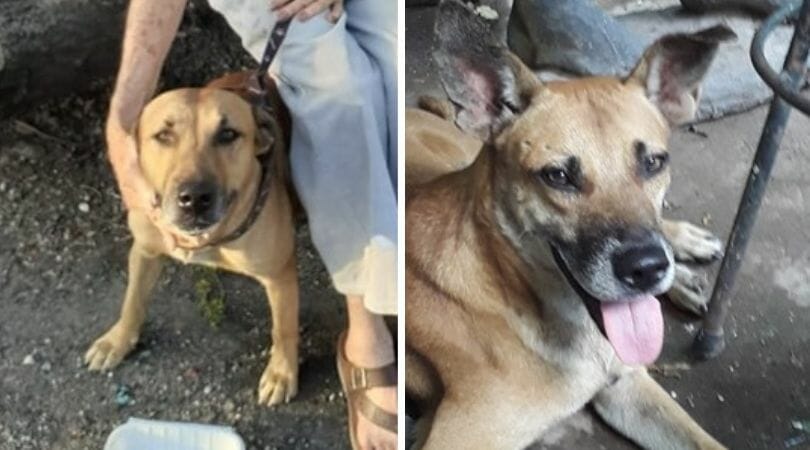 The story of Henry Morgan and Francis Drake starts four years ago when we first began feeding two ‘wild dogs’ in a yard downtown.

Actually, it starts before that because we had looked after Morgan’s grandmother, Wagga — who wagged her tail all the time until her pancreatic tumor got so large that we had to put her to sleep. 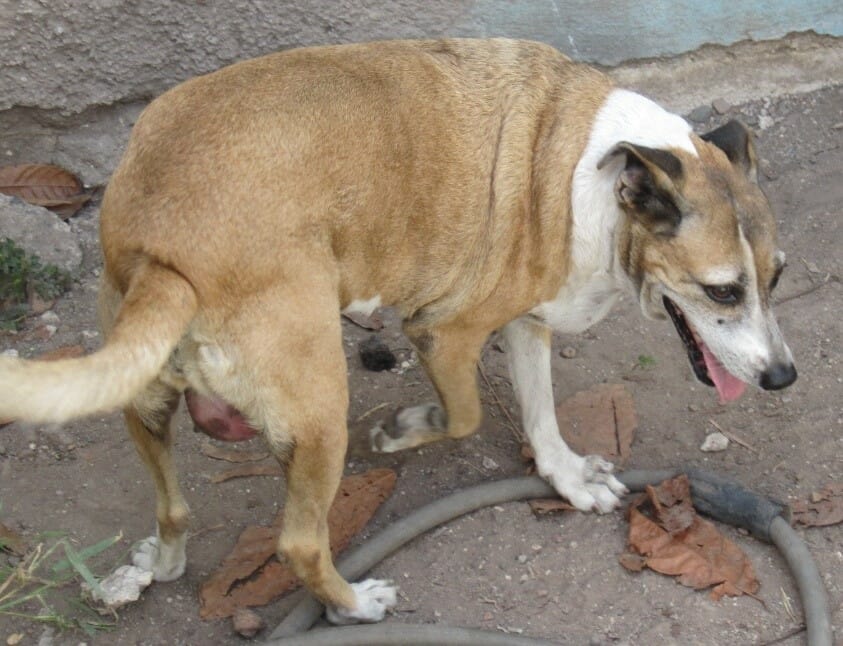 And Wagga’s one daughter, Shirley, who got locked away and, we were told, died of a maggot wound (yes, that one still hurts). 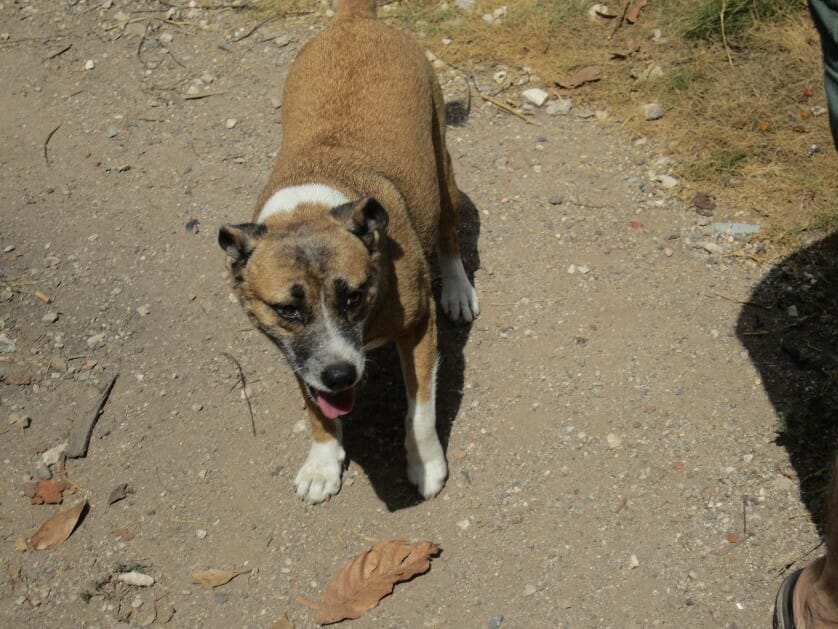 Morgan was her only pup, and we were never sure where Drake came from. He may have just walked in off the street and stayed.

From the beginning, Morgan was the more forceful, outgoing dog, even as a youngster. 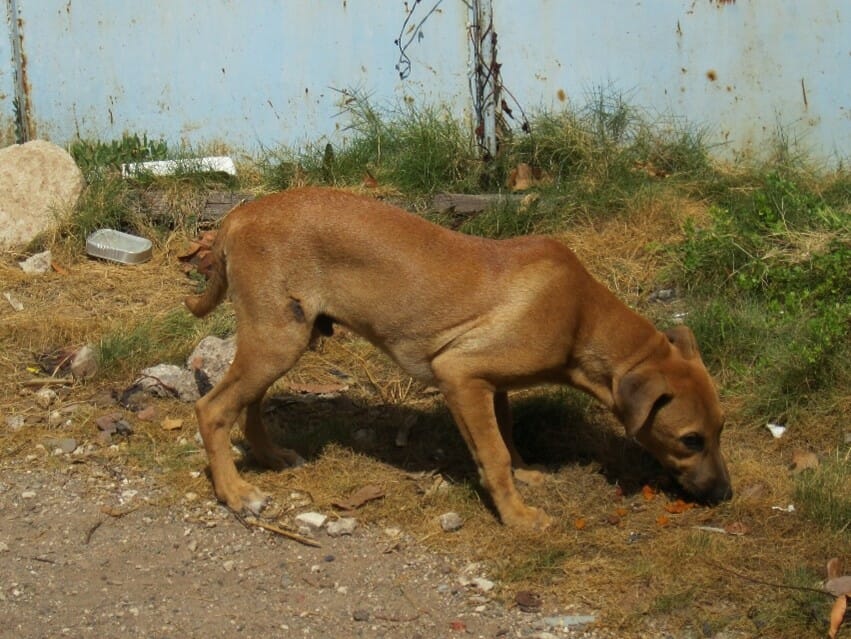 As time went on, Morgan and Drake occasionally allowed us to touch them. And gradually opened up, took a chance on us, and trusted us.

The property owners — who never contributed to feeding them, despite several requests — started making changes. They sealed off the back entrance, leaving only a grill gate securely padlocked. So we moved to the front entrance and fed the dogs in the main parking lot. Again, we made overtures to the property owners to buy a bag of dog food now and then, but never got more than a firm “no,” with no attempt at an explanation.

It didn’t matter. We were going to keep feeding the dogs anyway, and they grew strong and beautiful over time. 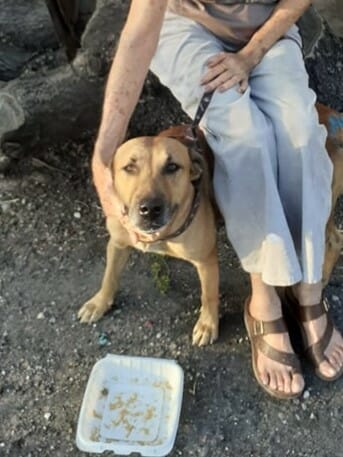 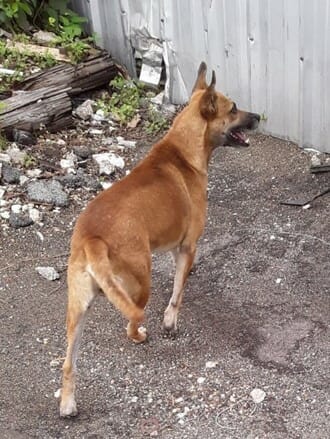 Then one day, without warning, a huge metal sliding gate was installed, and they couldn’t get out to us. We were told they were being locked in a pen around the side of the building, and only allowed out at night. We could hear them whining but had no way to reach them.

The owner refused to even speak to us, until one day I cornered the gentleman in the parking lot and asked what we had done wrong. He hedged and said, “Things had to change.” I drew my own conclusions and didn’t pursue the point.

They had clearly decided to use them as guard dogs, and we were told that yes, they were feeding them.

All we could do, on the days when the dogs managed to somehow slip out of the pen and run to the back gate, was reach down through the grillwork with a plate of food, and they would crane up to eat it. Sometimes, days would pass, and we wouldn’t see either of them. Or one would get out but not the other. 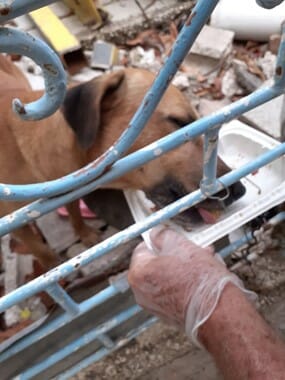 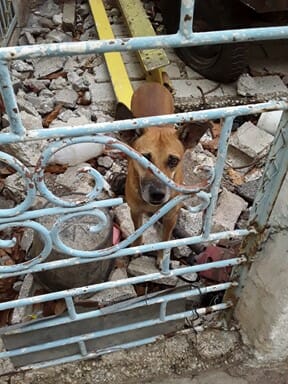 Then, they knocked down a section of the wall and brought in a large piece of machinery, which came right up to the gate, and busted the flooring so that there were broken building blocks and sheets of sharp metal everywhere. The dogs had to cross this obstacle course to reach the gate. They were constantly ripping their pads, and we had no way to treat the wounds — it was a nightmare.

Then, a message came through that we could ‘take the dogs.’ They were obviously tired of them, and no longer willing to buy them any food at all.

The nightmare became more acute because we had nowhere to take them, and everyone got sick of reading post after post with the sob story of the Pirates’ suffering.

Until one day, when I was offered a part of a friend’s garden to use as a foster home for them, securely fenced, and with its own kennels. It was a dream come true.

On the day we were going to move them, one of the employees of the company pushed open that huge sliding metal gate and let them out for us. By this time, they were so cowed by whatever had been done to them that they were afraid of everything and kept running from us and hiding under a car in the parking lot. Eventually, we got them both leashed and into the car, and then, to our great surprise, the transformation started right away.

Instead of trembling and howling, each time I glanced back I saw two heads looking with interest out the back window and two tails wagging. They knew their lives were about to change.

Once at their destination, they couldn’t believe their luck. They checked out every inch of the place, discovered all the hiding places, and were particularly fascinated by this thing called grass. 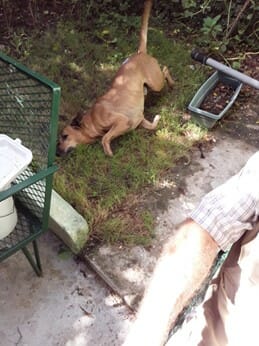 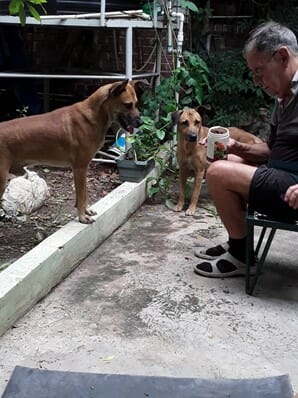 Morgan dug a hole and laid down in it. He got up and ran around the area, and Drake then laid down in the hole. Then, he too felt the need for a run.

I caught Drake having what looked like a conversation with a tall weed.

Another friend came over and brought treats — they were entranced.

For now, they need to take time and relax, to really let it sink in that no one is going to hurt them again. 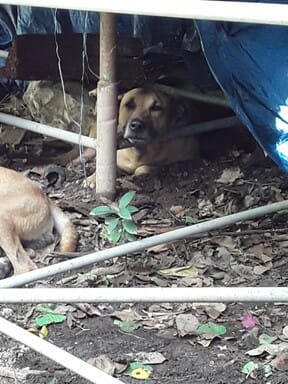 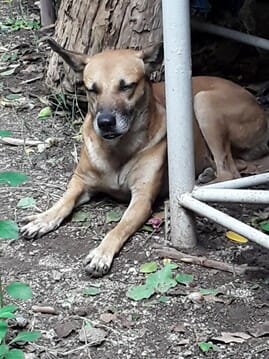 In due time, they will find their permanent home, but first have to become confident that they are safe and to believe that life can actually be good.

In the meantime, as they make all these new little discoveries, they are a joy to watch. 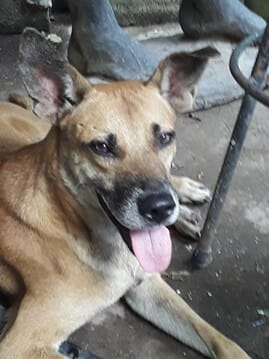 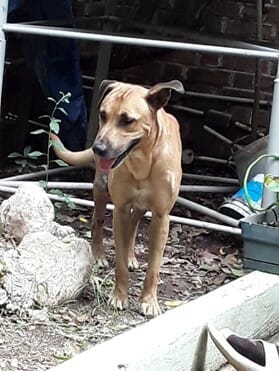