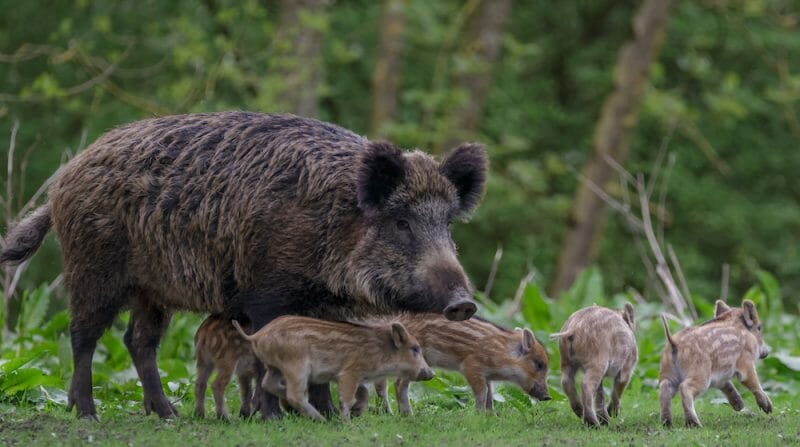 In a move that suggests exceptional intellect and empathy, a female wild boar flagged by a group of other boar broke two piglets out of a wooden trap — a unique documented case of a wild boar exhibiting “rescue behavior,” according to a new paper published by Scientific Reports.

A camera attached to a trap set up in the Czech Republic’s Voděradské Bučiny National Nature Reserve recorded the two juvenile boar being lured inside by the corn bait. Their motion triggered a log, which closed the door and imprisoned the piglets, who tried to escape by charging at the trap’s walls.

After two and a half hours,  an adult female wild boar — believed by scientists to be the piglets mother — entered the scene accompanied by several other adult wild boar.

During an incredible 29-minute rescue, the boar first investigated the log securing the front door by touching it with their snouts. Then, the female boar charged strategically at the logs blocking both the front and back doors. After repeated attempts, she managed to dislodge the logs and opened the door. Once the babies were freed, the boar left the scene.

Researchers noted in their report that rescue behavior has only been observed by humans in a small number of species, including rats and ants.

They differentiate rescue behavior from other forms of prosocial behaviors — such as cooperation — by looking for the following characteristics: There must be a victim in distress that will suffer or continue to suffer if not helped by the rescuer, the rescuer puts herself at risk of injury or capture by attempting the rescue, and the act of rescuing is devoid of anything considered inherently rewarding or beneficial to the rescuer.

The rescue behavior so selflessly demonstrated by this female wild boar shows that scientists may be underestimating the prevalence of this behavior in the wild.

It also shows that trapping animals for experiments, no matter the motive, is wrong.

Existing research already has proven that wild boar have complex cognitive skills and social networks. Causing undue psychological distress to wild boar and their piglets with cruel traps is not an acceptable way to study their behaviors.

Observing wildlife in their natural habitats without human interference can provide the same results.