Surgery A Success for Puppy Viciously Hurled from Moving Car 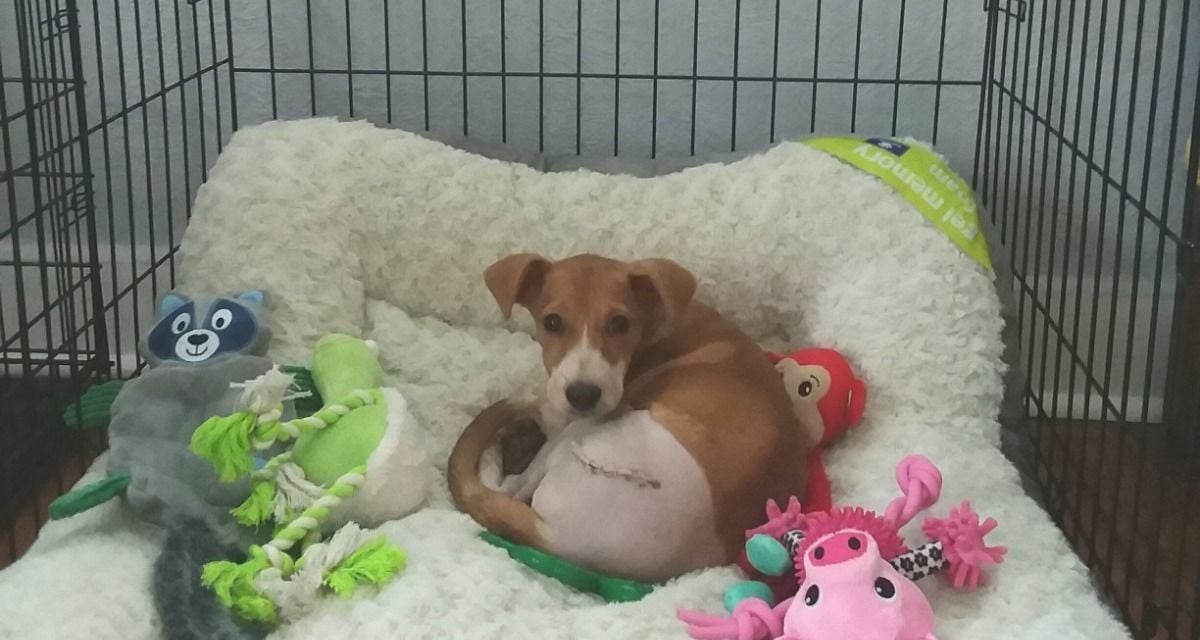 Picture of Kennerly by Missy Dawson Johnson, Administrator for Saving St. Louis Pets and a foster parent for The Goode Life Rescue in Herculaneum via the GoFundMe page she created for Kennerly.

A puppy suffering several fractures after being thrown from a moving car made it through surgery last week and is headed to a loving foster home until she can be adopted.

Kennerly was just 10 weeks old when someone dangled her by a leg through the window of a moving SUV near Kennett, MO. The person swung her around then hurled her onto the highway. Witnesses weren’t able to identify the car or license plate in their hurry to rescue Kennerly, who was rushed to a local veterinarian.

“Even with these horrific injuries she is the sweetest, most loving pup,” The Goode Life Rescue posted on their Facebook page.

After a preliminary examination, the veterinarian determined she was badly injured. Kennerly was transferred to The Goode Life Pet Rescue in Herculaneum to get more X-rays. The tests revealed that Kennerly had a broken leg and 5 more breaks in her pelvis and would require major surgery and a metal plate.

Pictures of Kennerly and an x-ray of her pelvis by The Goode Life Rescue via their Facebook Page.

“Her recovery will be long, but she is strong and a fighter,” The Goode Life Rescue posted shortly after Kennerly came out of surgery on August 3rd. “We are not rushing and want her to rest and heal!”

It was important that the suffering puppy get surgery as soon as possible – within a week – to prevent clots from forming around the fractures, which would make the surgery more complicated.

The procedure cost over $4,000, so Missy Dawson Johnson, a foster parent for The Good Life Rescue, set up a donation page.

“I can tell you, she’s a great puppy and deserves to live,” Johnson wrote on the GoFundMe page. “She doesn’t whine, even with her injuries. She’s always giving kisses and is so sweet. She’s safe, warm, and on kennel rest with pain meds in my home. But she deserves to be a puppy. I want to see her play ball and run around like puppies do but until she gets this surgery, she can’t.”

Thanks to local news coverage and kind-hearted people, they have raised over $6,000. Not only did the donations pay for the surgery in full, it also helped buy Kennerly an orthopedic bed and some toys to help in her recovery. The leftover money will go toward her continued care.

Kennerly went into surgery on August 3rd. The surgery lasted 3.5 hours but Kennerly was already up and reading to play the next day.

“In typical Kennerly fashion she has been attempting to stand all day… there’s no keeping her down!” The Goode Life Rescue posted on their Facebook page the day after Kennerly’s surgery. “She’s a true fighter and I can’t wait to be able to post videos of her in a few months when she’s able to be a frolicking, romping around little puppy again as she so deserves to be.”

Just days after her surgery, Kennerly is already soaking in the love of a caring foster home, much different than the one she was born into.