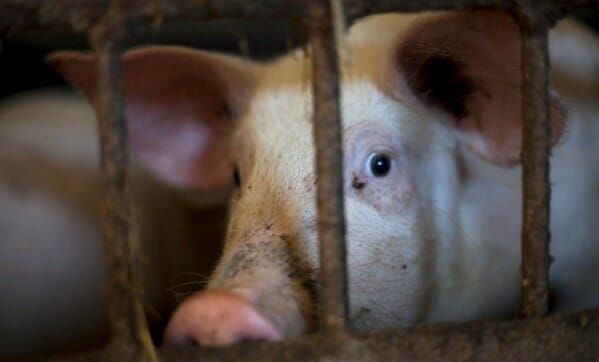 A USDA proposal that would slash slaughter regulation and allow a new, high-speed method for killing pigs is now open for public comment. Known as HIMP, the high-speed program is at pilot stage, and was trialled by five different slaughterhouses — but if the government approves the new protocols, HIMP could quickly expand throughout the U.S.

The proposed rule is designed to facilitate the rapid slaughter of pigs, placing profit before animal welfare and worker safety. Should the proposal pass, a mind-boggling 1,300 pigs could be killed every hour.

I strongly oppose the Modernization of Swine Slaughter Inspection rule, which endangers animals, consumers, and American workers. Under this dangerous proposal, the New Swine Slaughter Inspection System (NSIS) would give slaughter plants free reign to kill at irresponsibly high speeds with severely inadequate oversight. An investigation of a pilot high–speed slaughter program exposed pigs dragged, kicked, excessively shocked, and improperly stunned by workers who struggled just to keep up — risking their own safety in the process. I urge you to abandon this cruel and reckless proposal, for the good of pigs and humans.

Scott David, an undercover investigator for Compassion Over Killing, spent time in 2015 working at a Hormel supplier’s high-speed slaughterhouse in Austin, Minnesota. The investigation uncovered shocking abuses, including animals being “beaten, shocked, dragged and improperly stunned.” Some animals were coated in feces or had abscesses on their body – animals who would continue down the slaughter line to be killed and labelled fit for human consumption. David witnessed pigs improperly stunned or slaughtered, and regaining consciousness before or while entering the scalding tank.

This is the cruel reality of high-speed slaughter, and the new USDA proposal would roll this system out nationwide. Please help stop the horror. Leave your comment to the USDA now.