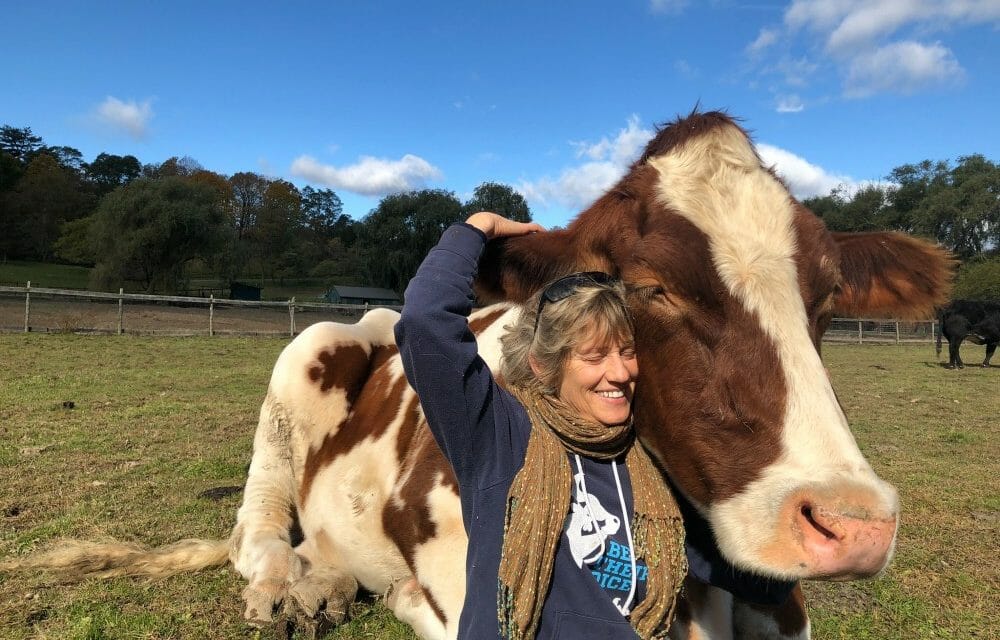 Catskill Animal Sanctuary (CAS) Founder Kathy Stevens has had the drive to follow the path of her passions her entire life — and also the self-awareness and wherewithal to recognize when the path had changed.

Stevens, who describes herself as a “farm girl, teacher, and writer” on CAS’s website, had spent ten years in a joy-filled career as an educator when she got an offer to become the principal at a media and technology school.

In a move that surprised even herself, she turned down the job.

“I was shocked at myself for that decision because I had always imagined that would be my trajectory, using public education as a vehicle through which to create social change on a small scale,” she told Lady Freethinker (LFT). “I said to myself, ‘Well, what on earth do you want to do now, because you have a whole lot of work years ahead of you.’”

After taking some time off to reflect, Stevens decided instead to connect her passions for learning and teaching with another long-held love: animals.

Catskill Animal Sanctuary, in Saugerties, N.Y., resulted in 2001 — starting as a derelict property replete with buried tires and collapsing barns and becoming a 150-acre healing haven serving 11 different species and hundreds of animals each year.

Stevens’s hard-earned insight from real-life experience, based in love, also has highlighted the importance of extending utmost compassion to humanity.

“I choose to believe in humanity’s goodness, and in our capacity to be our best selves,” she wrote on the CAS website. “It’s the only way I can do this work.”

While the sanctuary allows for rescued animals to recover from their horrific ordeals, Stevens and her staff also promote vegan living as a health-promoting solution for many of the ills plaguing people and the planet.

She shared more about her journey, her sanctuary, and “speaking love” as a guiding light for all she and her team do. Interview excerpts have been edited for length.

You also can learn more about Catskill Animal Sanctuary by checking out Stevens’s books — Where the Blind Horse Sings and Animal Camp — or by visiting the website. 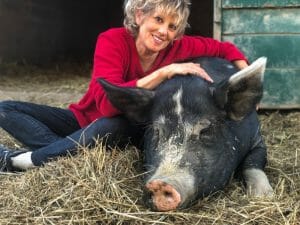 A Q&A With Kathy Stevens, Founder of Catskill Animal Sanctuary

Tell us more about the early days of Catskill Animal Sanctuary.

We got set up in the first year on a borrowed piece of land. But while we were operating there, we were also looking for a permanent home. We were a brand new nonprofit, so we put the word out to our small circle of supporters. A guy called me one day and said, “I found a property that you should look at, but I [have to] tell you it’s in rough shape.”

The farm was wildly overgrown. There were lots of collapsed buildings, the fencing was rotted, and there was an open septic. We were trying to put in fencing, and the auger kept getting stuck because tires were buried everywhere. There were 23 abandoned, rusted vehicles, and there were old oil tanks and box springs. It was probably a full year just to clean the property.

You use ‘Sanctuary’ in CAS’s name. What’s a sanctuary to you?

For me, the definition is a safe and peaceful haven. What people say differentiates CAS from other sanctuaries they’ve visited is the profound peace that they feel here. The joy is palpable.

I had the gift of growing up in a white, middle class, American family raised by parents who loved me. It wasn’t perfect, but relative to most humans, I won the lottery. So for me, even when I was young, life for somebody that lucky should be about doing everything in our power to ensure that those less lucky — no matter their race, color, gender, nationality, ethnicity, or species — should get a chance to experience the joy that I had been able to take for granted my entire life.

How do you ensure that the people you bring onto your sanctuary maintain the mindset of peace and love so critical to your mission?

Well, you fire the people who don’t act like that. Zero tolerance policy. You can make mistakes, we have all made mistakes, I make mistakes every day; but don’t be an asshole.

The biggest mistake I have made in 20 years is to hire people who actually say the words, “I have given up on humanity. I want to be around animals.” This movement — this animal rights movement and sanctuaries — is filled with people who are in a constant state of rage and just want to be surrounded by animals. But they bring this toxic energy. So finally what we have developed is a discipline to say, “No, you’re not the right person, sorry.” To not take the first person who is good on paper unless you have a very strong sense that their character is solid, and it includes a capacity to not only love animals but to embrace their fellow human beings and have a kind and accepting nature.

What made you decide to shift to a vegan lifestyle?

It wasn’t a moment. I did not have an epiphany. It was gradual. I stopped eating beef in the 90s for health reasons. Then I stopped eating cheese for health reasons, and then towards the later part of that decade I started doing more reading and research. At some point, I watched a documentary called Meet Your Meat and saw what I was participating in, and then I was just done at that point with everything but milk. Once non-dairy milks were prevalent, I quit. So it happened very gradually over the course of a decade.

Did you notice any changes after you committed to vegan living?

I feel profoundly at peace. I don’t know whether I can attribute this to diet, or also other aspects of my lifestyle, because I’m a healthy vegan but I am also very physically active. I am 63 years old and have every bit as much energy as I did when I was in my 20s. Not one ounce less. I still jump over the fences, and I still lift bales of hay into the truck. I’m not as physically strong; I’m not going to lie about that. It’s a little bit harder to lift those bales of hay into the truck (laughs).

What do you see as the benefits for living a vegan lifestyle?

Every animal is an individual. Every animal has every emotion that I do. All of us, no matter our species, move toward joy, and we move away from suffering. I don’t care whether you are a child, or a chicken; pain is pain. What we do to animals in the process of growing them and turning them into food is barbaric. So that’s my vegan argument from the animals’ point of view.

From a physical health standpoint, there is now fairly common knowledge that the consumption of animal products is one of the leading causes of heart disease, stroke, Type II diabetes, certain kinds of cancer, and then lesser things like acne and allergies and gout. So many of us are lactose intolerant, and yet we buy into this myth that there is this magic milk making cow and that if you don’t drink milk your bones are going to break; it has been so successfully marketed to us. Yet there are studies and so many people who are out there showing that a plant-based diet is an extremely health-promoting way to live.

There’s the idea of aligning your habits and your lifestyle [with your values]. Most of us hold a few values very close to our hearts — values of mercy, kindness, compassion — and yet we absolutely, unintentionally deny those values or become blind to those values or contradict those values when we eat animals. We allow those choices to trump our most highly cherished values. So honoring those and saying, “I get it, I believe that they want their lives as much as I want mine, I believe that they suffer” is just a way of honoring the values that we cherish.

From an environmental perspective… how much time do you have? Animal agriculture is unsustainable. It’s a leading cause of topsoil erosion, deforestation, species extinction, of dead zones in the ocean. Scientists have been saying for decades that unless we turn this ship around, we’re going to have an unlivable planet. There’s not going to be enough water, there is not going to be enough food, and the earth  is getting hotter and hotter and that’s causing all this turbulence: more storms, more hurricanes.

Is that what we want? The maddening thing to those of us who live and breathe this stuff is that it’s in our power to fix the problem.

How do you talk about Veganism to people in a way that they are open to hearing what you have to say?

We have a tagline, which is “Love spoken here.” It infuses all that we do, including and especially how we speak to each other and how we engage with the public. It’s simply common sense that one will listen with more openness to somebody who is speaking from a place of love and non judgment than someone who is yelling or making assumptions or being intolerant.