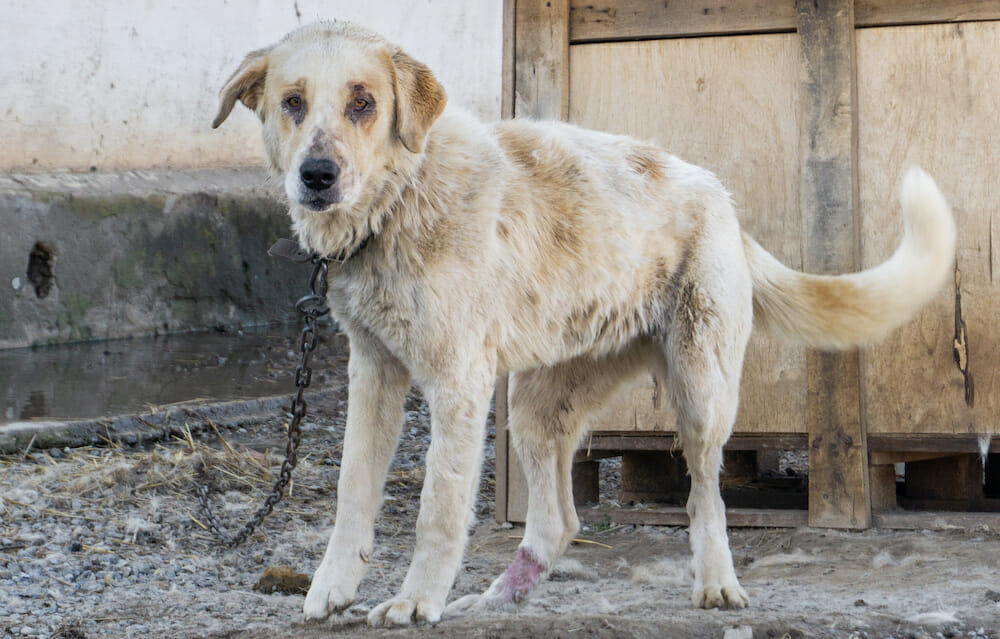 UPDATE (10/28/21): Texas Gov. Greg Abbott signed Senate Bill 5,  also known as “The Safe Outdoor Dogs Act,” on Monday — effectively banning the use of chains as restraints and also allowing law enforcement to act quickly if they find an endangered animal.

The new bill allows law enforcement to immediately issue criminal citations for violations, rather than waiting the 24 hours dictated in current law. The legislation also requires adequate shelter and access to clean water for dogs left outside.

The bill replaced SB 474, an almost identical proposal that passed both houses of the Texas legislature but was vetoed by Abbott, who then faced a firestorm of public outrage and angry Tweets hashtagged #AbbottHatesDogs.

We thank everyone who signed our petition demanding justice for these innocent animals left suffering outdoors and are overjoyed that they will now be able to be helped, and any animal abusers will be able to more easily be held accountable.  Speaking out made the difference!

A bill seeking to stop cruelty to Texas dogs is back on the agenda — and we must speak up NOW to end dogs’ suffering.

SB 474, originally pitched during the 87th legislative session — and passed with broad bipartisan support — would have prohibited Texans from keeping dogs chained outdoors, without food or water, and at the mercy of severe summer heat and the elements.

The bill, as written, was supported by hundreds of animal control officers, county prosecutors, law enforcement, and animal advocates.

But Gov. Greg Abbott vetoed the lifesaving legislation in June, saying certain provisions of the bill — including paying attention to how long dogs were kept in truck beds or the length of their leashes or chains — would have amounted to “micromanaging” the state’s dog owners.

He also cited existing protections, established in the state via a 2007 bill that many have said is too vague for animal control and law enforcement to enforce.

The governor got slammed for the decision by members of the public, who started up the hashtag #AbbottHatesDogs on Twitter and other social media.

Abbot, who is facing a re-election campaign in 2022, responded by asking the legislature to once again take up a bill that would protect dogs left outdoors on a leash.

The new bill takes into account the governor’s objections to the former provisions while establishing a definition of what constitutes adequate shelter and care for dogs — including that it would become illegal to leave a dog chained outside in the hot sun without food or water.

Our voices were heard once. They can be heard again, and the result must be nothing short of saving the lives of countless innocent dogs.

Sign our petition urging Gov. Greg Abbott to support the Safe Outdoor Dogs Act this time around and save dogs from suffering.