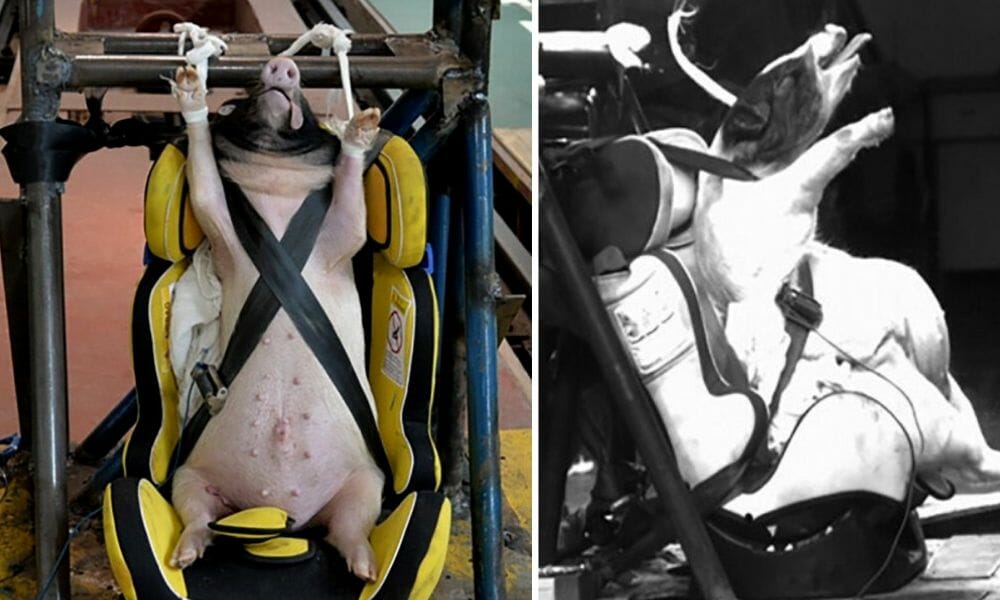 In a horrifying and needless experiment, scientists in China reportedly strapped 15 young pigs into car seats and slammed them into a wall, ultimately killing all of the helpless animals.

Researchers from the Institute for Traffic Medicine starved the 70-to-80-day-old pigs and deprived them of water leading up to the barbaric experiment. Then, they strapped the animals up and catapulted them to their deaths at 30 miles an hour, according to The Independent.

The animals sustained fatal injuries in the needless study, including “abrasion, contusion, laceration, bleeding and fractures,” with severe damage to their spines and internal organs.

Pigs are highly intelligent and sensitive beings. The ones used in this gruesome experiment did not deserve to be tortured and killed.

Besides being cruel, using pigs for impact tests is also scientifically meritless. Pigs are anatomically different from people and are tied into unnatural positions for these brutal and outdated experiments, which yield no useful information about human car crash experiences.

Companies throughout the world stopped conducting unethical and pointless impact tests on live animals decades ago, and it’s time for China’s Institute for Traffic Medicine to get on board.

Sign this petition urging Chinese Ambassador to the U.S. Cui Tiankai to call for an end to the appalling and inhumane practice of using live animals in impact tests, and push for cruelty free testing methods instead.