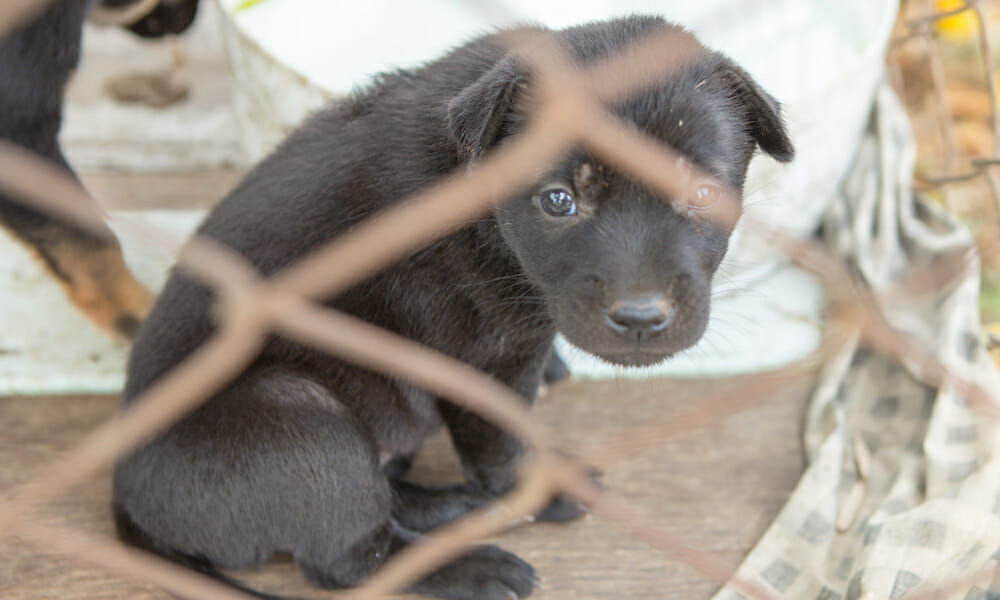 Believed to be the victim of a botched puppy smuggling, Befa, a malnourished Springer Spaniel puppy, sat crammed in a cat carrier in the back of an abandoned van with four other puppies before rescuers found her.

She survived. But three of her siblings — who developed parvo-like symptoms soon after the rescue — died.

Sadly, stories like Befa’s are on the rise in the United Kingdom, which has seen a 260 percent increase in puppy smuggling over the past year. These very young animals don’t meet the country’s pet import rules.

The country reported 843 illegally imported puppies seized at the border in 2020 alone.

That ghastly number includes six tiny puppies, found covered in oil and suffering from diarrhea, who were intercepted at the Dover airport en route from Romania. Four 8-week-old beagle puppies also were discovered, dehydrated and starving, in the back of a van in London. Their recovery took three weeks.

Other victims include puppies as young as four weeks old, ripped from their mothers and sold for profit; pregnant mothers on the verge of giving birth, making long and arduous journeys overseas; and dogs with open wounds from inhumane ear croppings and tail dockings — which has banned the brutal surgeries since 2006 — imported to satisfy the whims of customers in the country.

But now, there could be new hope for helpless and innocent dogs exploited in puppy smuggling operations.

The UK Government is considering increasing the import age for puppies from 15 weeks to six months and also banning the import of heavily pregnant dogs and animals with docked tails or cropped ears. The changes, if passed, could help prevent the suffering of countless dogs exploited in heartless puppy smuggling operations.

A DEFRA spokesperson told Lady Freethinker that the changes — as proposed, would prevent movement of all puppies under the age of six months and dogs with cropped ears or docked tails from entering the country, “apart from in exceptional circumstances.”

“This would prevent the movement of rescue puppies and dogs into Great Britain, which do not comply with the rules set out above,” the spokesperson said. “We consider this to be a proportionate and necessary approach to tackling the illegal puppy smuggling trade and safeguarding animal welfare.”

But those backing the bill, including Veterinarian Marc Abraham, noted in written comments submitted to Parliament that rescue work could easily be accommodated.

“It is important to note that commercial sales of animals can easily be distinguished from charitable and rescue activity,” Abraham wrote.

It’s time to make a real difference for dogs bred in horror mills and sold overseas to the UK for profit.

Sign this petition urging the UK Department for Environment, Food, and Rural Affairs to increase penalties for puppy smugglers who victimize their dogs in atrocious conditions, bump up the import age for puppies, and ban imports of animals who are heavily pregnant or who have had their ears or tails cruelly cut off.

We’re also asking DEFRA to look into options that would allow legitimate rescuers and rescue organizations to continue their life-saving efforts for puppies less than six months or legitimately rescued dogs who otherwise might be prohibited from entering the country under the proposed changes.