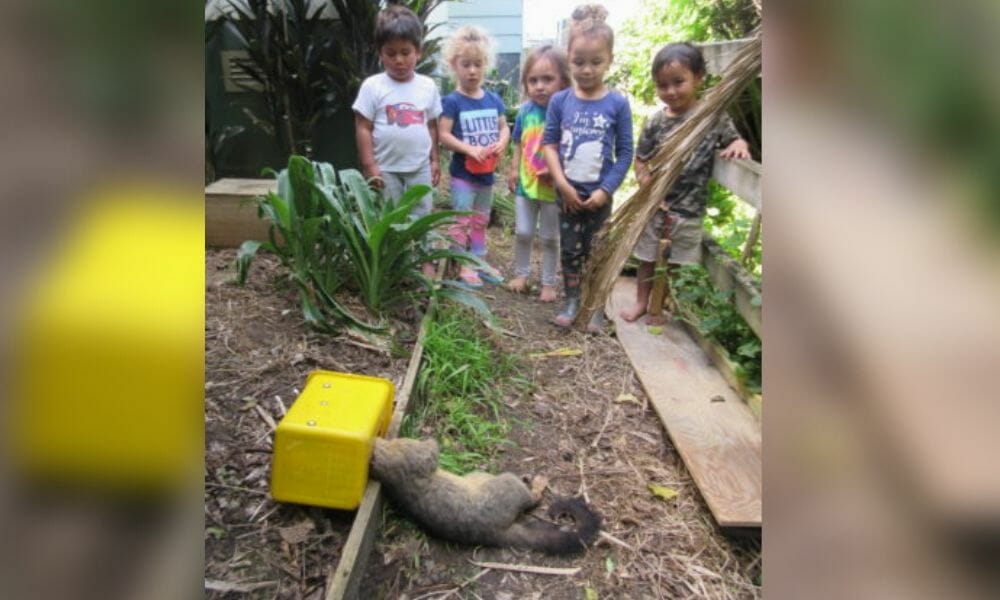 Sage sent back a 4-page letter that said the goal of Predator Free New Zealand is to protect the country’s biodiversity, particularly its endangered native species, while also using humane methods to manage other species.

“The Department of Conservation’s mandate is to protect native species and their habitats,” Sage wrote. “The need to treat animals humanely guides the department’s pest control activities. It acts in accordance with New Zealand’s best practice animal control and welfare standards.”

Sage added that his department is commissioning research to understand the development of conservation values in children and the impact of “pest control” messaging on children’s development of compassion toward living creatures.  The research will inform the department’s approach to its Predator Free 2050 program, he said.

Regardless of the need to responsibly and humanely protect native species, children — especially at young ages– should not be instructed to kill animals or be led to believe that killing animals is their job or their responsibility. Especially during developmental years compassion for other species and respect for life should take center stage.

Teaching children that killing is the answer for conservation, or that it’s something to celebrate in any situation, is wrong. We are disappointed that New Zealand is teaching youth that violence is something to be rewarded, and turning to culls while failing to attempt proven solutions like sterilization. Additionally, they target innocent animals while failing to address the devastation of their own animal agriculture industry, which is a grave threat to native species.

The extremely worrisome Predator Free New Zealand program that teaches and encourages young children to trap and kill wildlife has been recruiting additional schools, including those for primary students with kids as young as five years old.

Their website quotes a teacher involved with the program saying of the students, “They’re very boisterous boys and girls – they love building things that kill…”

Another educator shared that a pupil said, “Every break. We don’t go playing any more. We go trapping!”

Such praise for young children excited about killing animals is deeply disturbing — the schools of New Zealand are raising children to become bloodthirsty adults with little regard for the lives of the possums, stoats, ferrets, weasels, cats and hedgehogs destroyed at their hands.

Professor Marc Bekoff objects to the cruel practice, sharing concerns of teaching children to kill animals, the well researched link between violence against animals and violence against humans, and New Zealand’s extremely high prevalence of domestic violence.  According to the NZ Herald, “New Zealand has the worst rate of family and intimate-partner violence in the world.”

We must act now to protect and respect wildlife, as well as highly impressionable children, before it’s too late.

Sign this petition to urge Prime Minister Jacinda Ardern to end this disturbing program, and teach the children of New Zealand to practice compassion, not violence against animals.