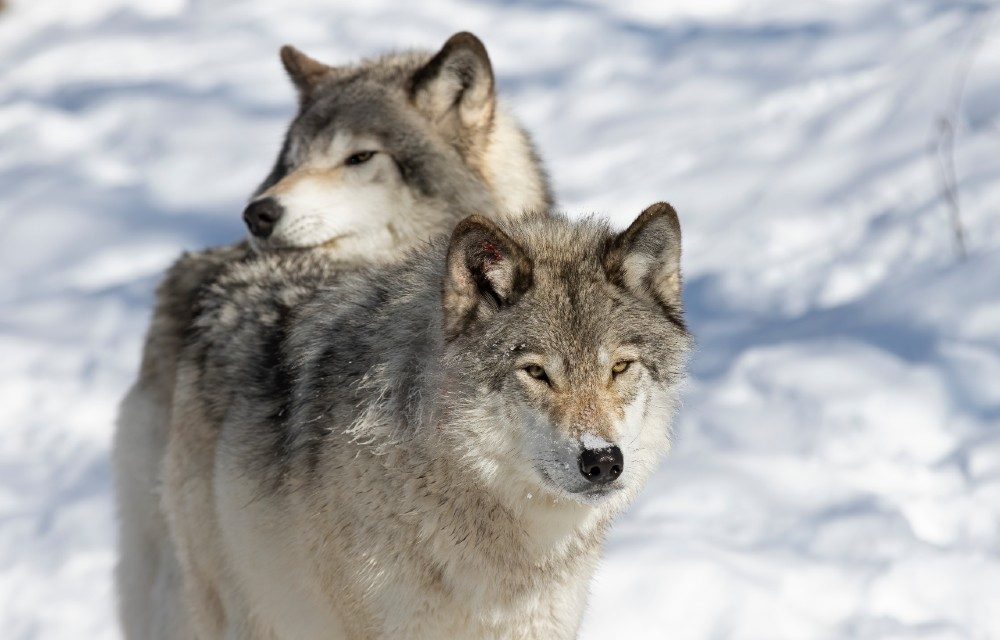 UPDATE (7/11/2022): Unfortunately, Commissioners axed this important amendment with a 5-4 vote in mid-July, with Commissioners Donald McIsaac Molly Linville, Barbara Baker, Kim Thorburn, and James Anderson voting to not add the lifesaving provisions that livestock producers prove they’ve tried non-lethal measures prior to gunning down endangered wolves, according to The Spokesman-Review. We thank the remaining commissioners — Tim Ragen, Melanie Rowland, Lorna Smith, and John Lehmkuhl  — for speaking up for Washington’s precious wolves. We thank the more than 38,000 people who signed our petition. We’ll keep speaking up for animals everywhere. —Lady Freethinker Staff

Wolves are considered endangered in Washington State, but a state agency has killed 34 of them in the last decade in response to a relatively small number of wolf-rancher-livestock conflicts.

The situation already was so dire in 2019 that Gov. Jay Inslee sent the Washington Department of Fish and Wildlife (WDFW) a letter saying the number of annual lethal removals was “simply unacceptable” and that the agency needed to “find new methods to better support co-existence.”

But that hasn’t happened. In 2020, WDFW came under intense scrutiny for controversially wiping out the Wedge Pack following depredations. That same year, the agency reported that 76 percent of packs had zero involvement in any livestock deaths.

In 2021, WDFW also met with public outcry after killing two wolves in Columbia County – a year in which the agency reported only five calves confirmed dead and eight calves confirmed injured, statewide, from wolf attacks, compared to data from USDA reports showing at least 228,000 calves and more than 1.1 million adult cattle in the state.

This year so far, there have been zero documented instances of wolf-caused mortalities. And in a promising new development, the WDFW also is considering a rule-making change that would prevent ranchers and farmers from killing wolves without taking other steps first.

The proposed rule change would direct WDFW staff – for the first time ever – to require that livestock producers prove they have proactively tried appropriate non-lethal measures before resorting to fatal violence.

While there’s guidance already that they do so, it’s in the form of non-binding language that provides no incentive that they actually follow through – or consequences if they don’t. The rule change also would create chronic-conflict zones in the state, where staff could focus their efforts while also clearly defining what non-lethal management forms would be “appropriate.”

Tellingly,  29 of the 34 wolves killed by WDFW in the last decade – or  85 percent – were killed following depredations on livestock owned by a single cattle rancher who pays a fee to the U.S. Forest Service to graze cattle in the Colville National Forest, according to National Geographic.

Also tellingly, the WDFW has acknowledged in its wolf management plans that stable wolf populations lead to more stable situations, and that killing pack members can actually lead to more killing of livestock, as wolves become desperate and more likely to attack cows when their hierarchy is disturbed

Washington state only had left 179 precious wolves, scattered throughout 29 packs, in 2020. It’s time to take action before more of these endangered animals needlessly die.

There is no reason that wolves should be killed when effective alternatives exist. The depredation data shows that they work if ranchers and farmers commit to using them.

Ranchers have successfully used fladry – involving colored string tied to fence lines that flutters in the breeze – as well as motion activated lights or flashing fox lights, which give the impression of humans patrolling the area.  The state also has programs available to small businesses that can help offset the costs of using non-lethal measures.

WDFW is accepting public comment on the proposals through April 11. Smith said all Washingtonians should care about the outcome.

“Most people in Washington, no matter who you are, no matter what perspective you’re coming from, you value the outdoors, you value wildlife, you value land, you value public spaces,” she told Komo News. “That’s something that matters to all of us.”

Sign our petition urging the WDFW to pass the proposed changes that require people who want to kill endangered wolves to prove they’ve tried other appropriate methods first.

Then, if you are a Washington State resident, please also take the time to tell the agency that you STRONGLY SUPPORT the proposed rulemaking changes that would require appropriate non-lethal measures to be implemented. The WDFW is taking public comment through email at [email protected], on their website  at https://publicinput.com/U0420#0  or through phone at 855-925-2801. Callers must enter code 3861.