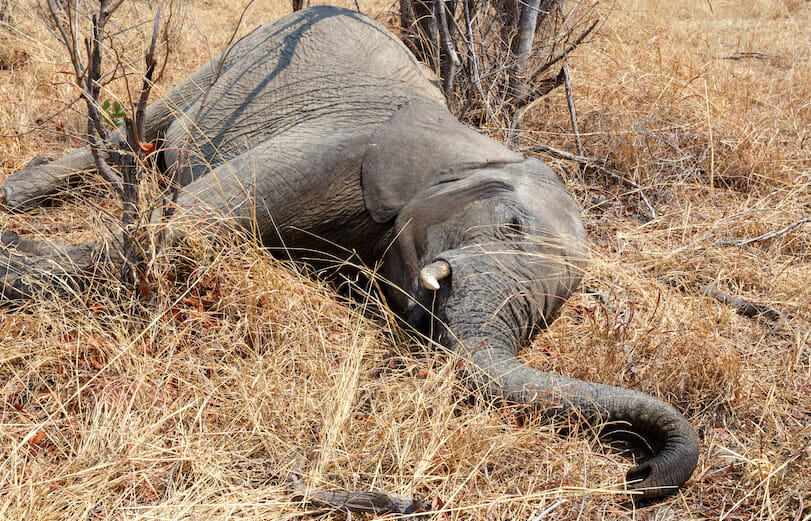 PETITION TARGET: Ambassador of Sri Lanka to the US Rodney Perrera

UPDATE: We sent our petition, signed by more than 32,759 people, over to the Ambassador of Sri Lanka to the United States. Thank you to everyone who signed this petition demanding an end to the use of these horrific devices. We’ll keep watching for other opportunities to make a more humane difference for elephants worldwide. — Lady Freethinker Staff

Dozens of baby elephants in Sri Lanka have died over the last year due to gruesome devices called “jaw exploders” — and they are as awful as they sound.

Hunters mix food bait with gunpowder, metal shards, and fragments of rock. When the elephants bite into the mixture, it explodes, with devastating consequences.

The elephants’ jaws are shattered, their tongues and mouths completely destroyed. Infection often sets in, slowly rotting the esophagus and surrounding tissues. If the animal doesn’t die from dehydration and starvation due to being unable to eat and drink, they will eventually perish from the resulting infection. It’s an agonizingly slow way to die.

These devices are now the leading cause of elephant deaths in Sri Lanka, killing 64 animals in 2018, and 30 so far this year.

The majority of deaths are just babies, most under five years old. At this age, elephants are playful and experimenting with food, not yet wise enough to recognize the danger.

With such a huge number of deaths from these devices, it’s clear that Sri Lanka’s government is not doing enough to enforce the ban.

Sign this petition asking Ambassador of Sri Lanka to the US Rodney Perrera to urge the Sri Lankan government to take urgent steps to protect their precious elephants by putting an end to the use of jaw exploders for good.