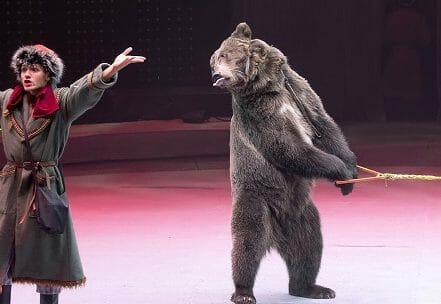 UPDATE (3/7/2022): Lady Freethinker received a document in Russian from the Main Investigative Department for the City of Moscow saying that they have no authority in this case, according to a translation. We thank everyone who signed our petition to raise awareness and a voice for these poor exploited animals, and we will continue to do all we can to advocate for wild animals exploited in circuses everywhere. —Lady Freethinker Staff

Tragedy strikes in Russia, once again showing the world that wild animals should never be exploited for entertainment.

Why? For their welfare, and for the safety of their human trainers.

Wild animals are always dangerous to human beings. Anyone who performs or even interacts with a “trained” wild animal risks immense harm.

Seven-year-old Yasha was frequently forced extremely close to people, both professionals and civilians.

He visited the locker room of a Moscow soccer team. He pushed the wheelchair of an injured circus performer, leering near enough to lick the person’s face, according to the Daily Mail.

Like most circus animals, Yasha was likely stripped of his natural habitat and horrendously abused his entire life.

Animals of any kind are not natural performers. Tricks are cruel and unusual, not instinctual.

As a consequence, circus trainers tend to resort to painful, frightening, and downright torturous techniques.

Circuses are far from fun and games. Human and animal lives are at stake. Let’s fight to end animal cruelty in Russia and ensure total safety for all.

Sign this petition urging Russian Ambassador to the United States Anatoly Antonov to push for a ban on wild animals in circuses, putting an end to animal cruelty and ensuring trainers’ safety.