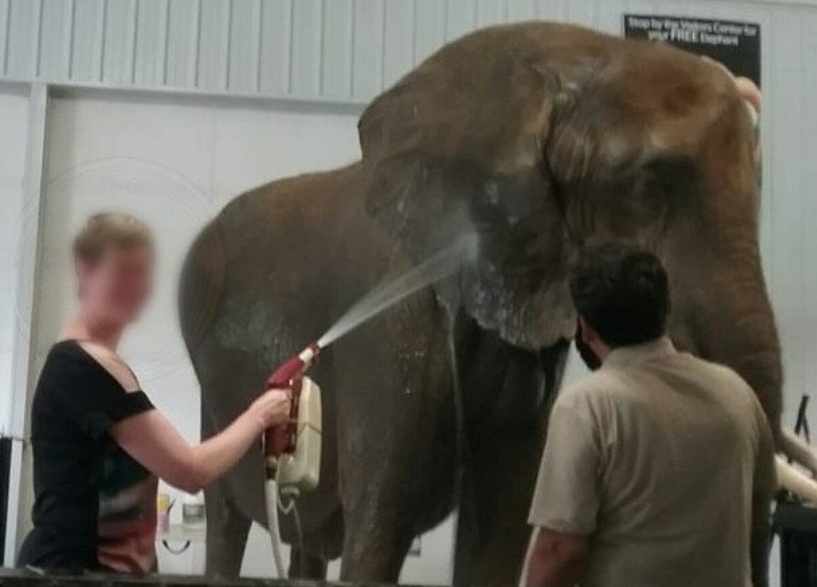 Elephants who formerly spent their lives exploited in circuses now are being forced to have hundreds of strangers touch them, spray them with water, pose for pictures with them, and senselessly paint their toenails — with each encounter raking in between $119 and $599 for their exhibitors at Wilstem Wildlife Park in Indiana during the summer months.

The website for Wilstem Inc, a for-profit business with properties in French Lick and Paoli, shows paying customers can participate in an elephant “spa” for $119, a 2-hour encounter where elephants have to endure untrained people spraying them with water and stand still while “young participants” paint their toe nails.

The business’s most expensive elephant package – billed as its “most exclusive,” “private” encounter – allows up to eight people to crowd around the captive elephants, touch them, and take photos with them.

These hands-on encounters with elephants – who are sensitive, highly intelligent animals –  are continuing even though Wilstem Inc recently was fined $8,000 by federal inspectors for numerous violations that spanned species—including lack of facility supervision for children interacting  directly with animals. 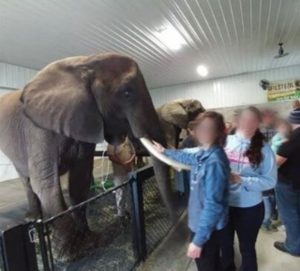 In an affidavit obtained by Lady Freethinker through a public records request, a federal inspector wrote that she had serious concerns about animal handling, other animal interactions involving sloth and kangaroo, and that Wilstem Inc was putting profit before the animals’ welfare.

“The facility needs to be held accountable and responsible for the deaths, mistreatment, and suffering several of the animals were put through before they died or were put to death,” the inspector wrote.

The elephants on display at Wilstem Inc during the summer months are on loan from another USDA-licensed facility in Florida with its own controversial history and documented welfare violations —  including not providing adequate veterinary care to an elephant with a lump on her face and for keeping the elephants chained — as well as other exploitative stunts, such as forcing elephants to play harmonicas for visitors’ “entertainment.”

Transporting the elephants from one exploitative venue to the other every year also is dangerous for the elephants and people. The facilities made headlines a few years ago when the transport trailer caught fire and the elephants escaped onto the nearby interstate – where fire fighters, sheriff’s deputies, and emergency services had to assist.

Elephants and other wild animals are not here for our “entertainment.” They deserve to live their lives peacefully in their natural environments, with freedom to roam, play, and interact with others of their own kind  — as they need to do in order to thrive.

Sign our petition urging the USDA and Indiana Department of Natural Resources to immediately inspect conditions at Wilstem Inc and to seize any suffering animals and safely relocate them to a reputable sanctuary. We’re also asking Wilstem Inc to stop offering paid interactions involving physical contact with their elephants and other wild animals.