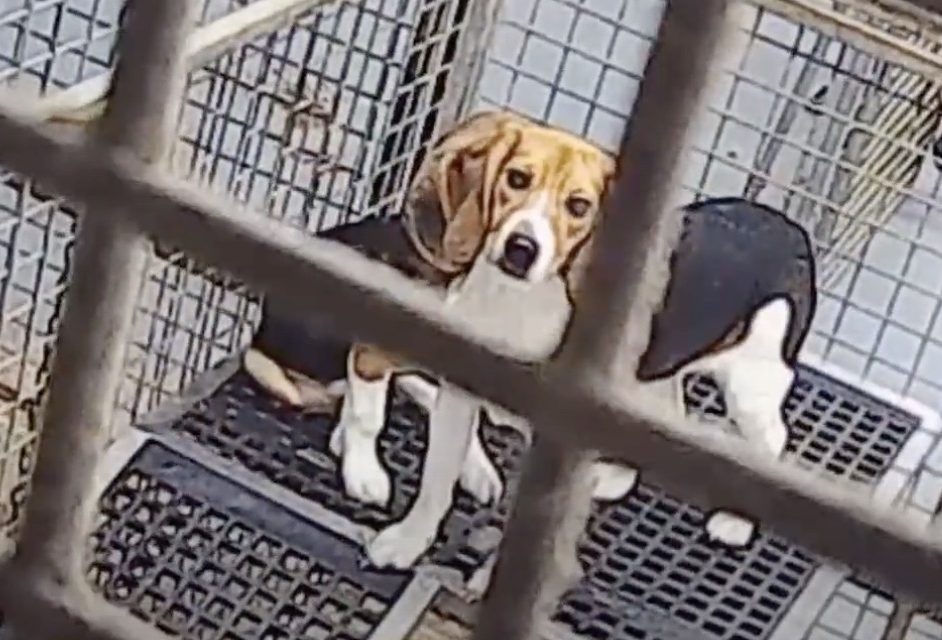 (Screenshot of video as published by The Independent)

Gentle beagles reportedly are suffering from severe stress and unsanitary conditions, including barren cages soiled with their own waste, while confined indoors at a government-licensed, UK facility breeding the dogs for biomedical research, according to veterinary experts who viewed undercover footage and news reports.

Undercover video taken by an activist group camped near the facility — in Huntingdon, Cambridgeshire, and owned by American research company Marshall BioResources (MBR) — is the first detailed look inside the facility in the last 50 years, The Independent reported.

That footage, also published by The Independent, allegedly shows barren enclosures, floors stained with feces, little to no enrichment, and stereotypical behavior — indicative of high levels of stress — including pacing, according to animal behaviorists who reviewed the video.

MBR has denied any animal welfare violations, and the Home Office –  the UK agency that licenses research facilities — found no breaches of its minimum welfare regulations for animals at an inspection in June, The Independent reported.

But Alice Brough, a veterinarian-turned-campaigner who reviewed the footage, classified the conditions as “starkly reminiscent of pig factory farms”  while Andrew Knight, an animal welfare professor at Winchester University, deemed the beagles’ recorded behavior “pathological.”

“The puppies display pathological behaviors typical in confined animals whose needs are not being met,” Knight told The Independent.

Protestors have alleged the dogs don’t have natural light or time outdoors, while MBR has confirmed the dogs are not allowed to go outside, according to news reports.

The breeding facility reportedly produces at least 2,000 beagles  each year — with the biomedical research industry preferring the breed because of the dogs’ kind, trusting, and docile natures.

It’s a travesty — and a tragedy — that gentle beagles are still being bred for excruciating, invasive procedures when an existing — and growing — body of scientific, gold-standard research indicates genetic differences between humans and other species makes such testing expensive, lengthy, and ultimately unreliable for safe treatments for people.

The current conditions for beagles at this lab must be thoroughly investigated and any suffering animals that can be immediately relocated to sanctuaries or shelters. Companies that wish to be scientific leaders also must shift to safer, more cost-effective, and more humane human biology-based alternatives, rather than continuing cruel and senseless testing on sentient animals.

Sign our petition urging the Home Office to immediately inspect conditions at the MBR- Huntingdon facility and for Marshall BioResources to shift their resources to pursuing non-animal research methods — for the safety and well-being of both animals and the people relying on these companies for effective treatment and cures.