SIGN: Shut Down the Dog Meat Trade and Live Animal Markets in Sumatra 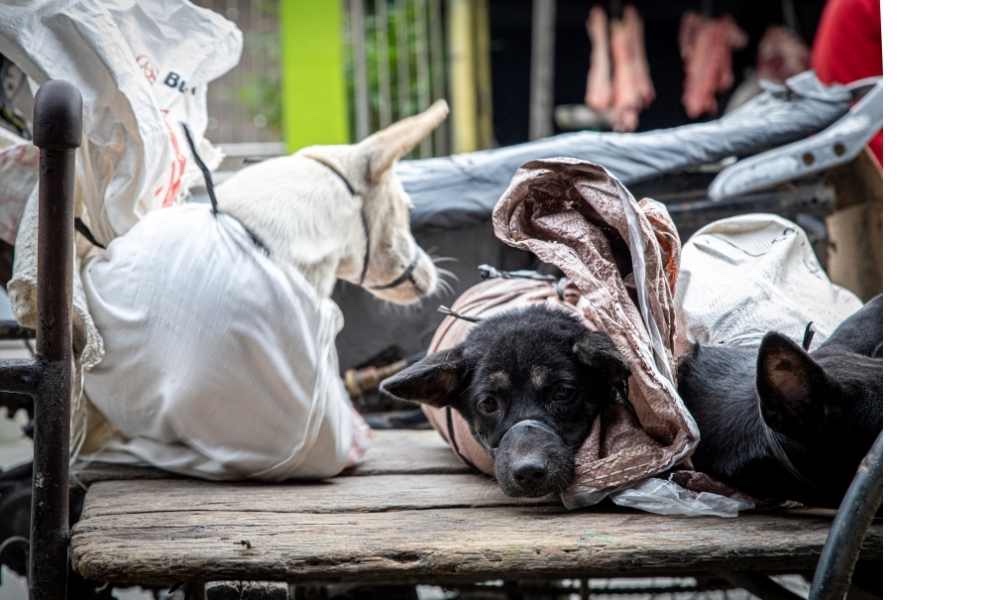 Dogs forced into sacks with their mouths strapped shut, then violently killed. That’s what a Lady Freethinker investigation into the dog meat trade in Sumatra, Indonesia found, along with cruelty to birds, turtles, lizards, and other animals sold for food at live animal markets.

The dogs are rounded up from the streets or stolen from home, or are sometimes sold by their owners. They’re transported all over Sumatra— many die from stress and heat exhaustion. Then they’re killed by having their throat slit while they’re still conscious and able to feel pain. According to Sumatran organization Toba Animal Friends, who worked with LFT on the investigation, dogs are also stabbed in the heart or burned alive.

In the bustling tourist city of Samosir, LFT’s investigator saw dogs openly killed, and their charred bodies on public display.

At the live markets LFT investigated, live turtles were crammed into small buckets, and one climbed on top of dead, dismembered turtles nearby. A lizard who had tried to escape had her mouth tied shut and legs together, and a snake’s head was taped. At an exotic pet market, bats were seen stuffed in small cages, despite the risk of disease spreading.

During the investigation, the mayor of Medan—North Sumatra’s capital and largest city—circulated a letter banning the dog meat trade. However, even after the ban, our investigator witnessed cruelty to dogs throughout the city.

Live markets are incredibly cruel to animals and a huge threat to public health. According to the Center for Disease Control, 75% of emerging infectious diseases are zoonotic in origin, which means they started in animals before jumping to humans.

Filthy live markets are perfect breeding grounds for new diseases, and as long as we continue to stuff sick and stressed animals in cages stacked on top of one another, and kill them in bloody meat markets, animals will continue to suffer and we risk starting the next pandemic.

Please sign this petition to urge the Sumatran government to shut down all live markets and ban the dog meat trade statewide!