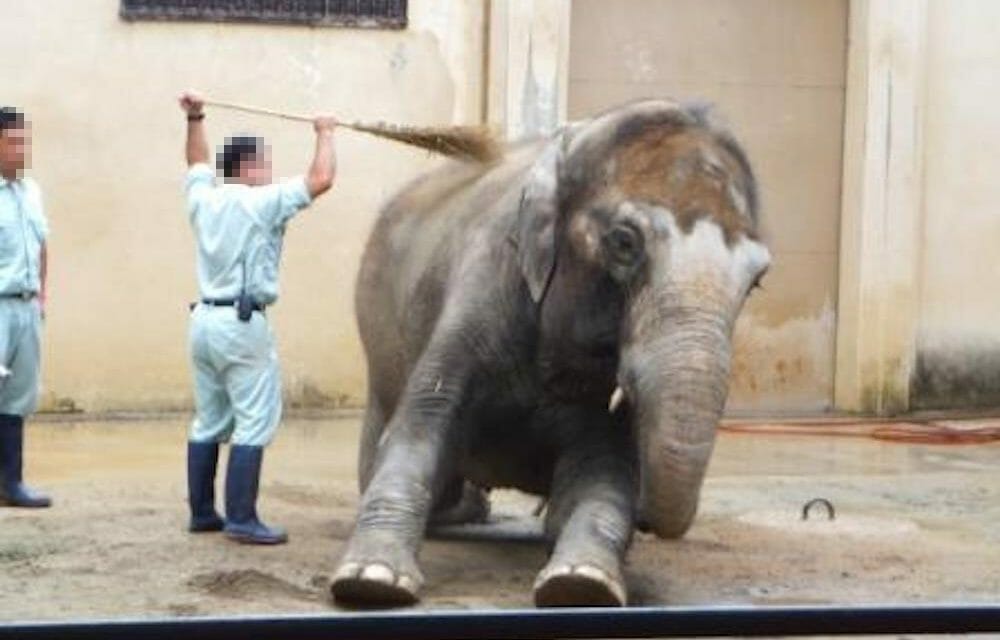 UPDATE (12/1/2021): Himeko died at the Himeji City Zoo in 2020 of a “foot-related illness,” according to Elephants in Japan, a global initiative focused on improving welfare of elephants kept in solitary confinement. But following this sad news, the initiative also heard that Himeji City Zoo no longer will be housing elephants.

“We received confirmation directly from the zoo’s director,” the initiative said on its website. “He acknowledged that his zoo is simply unable to offer elephants the space and social interaction they need.”

We are deeply saddened that Himeko spent almost three decades in such deplorable conditions and hope she is now at peace. We’re also grateful that no other elephants will share her sad fate at this zoo. Thank you to the more than 26,000 people who signed our petition urging for her freedom. —Lady Freethinker Staff.

Himeko, a 43-year-old Asian elephant, spends 18 hours a day indoors, swaying back and forth in her own feces and urine, and when she finally does get outside, she is forced to perform for zoo visitors. This poor creature has languished in cruel solitary confinement for over half her life at the Himeji City Zoo in Japan.

In the wild, elephants travel in large families and walk at least 15 miles a day. Himeko lives in isolation and is confined to an area that doesn’t allow her to move freely about, and she shows her frustration with zoochosis.

Zoochosis is a repetitive behavior that seems to serve no function for the animal, such as swaying, and is a symptom of severe distress among captive elephants. These highly intelligent and social creatures need to interact with other elephants and engage in other natural behaviors, and Himeko is being deprived of that basic life necessity.

It is imperative that the Himeji City Zoo relocates Himeko to a more appropriate environment, like an elephant sanctuary, where she can bond with members of her own species. The Japanese Association of Zoos and Aquariums has failed to make this happen, despite releasing a statement over two years ago stating its support for placing elephants in proper social groups

Sign this petition urging the Himeji City Zoo to release Himeko from solitary confinement and free her from her constant suffering.