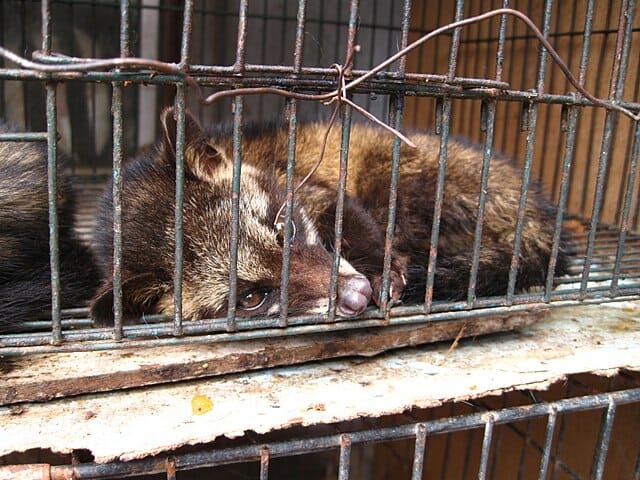 UPDATE: After taking the important step of passing a permanent ban on wild animal consumption, China appears to have reopened their cruel and dangerous live animal markets. Dogs, cats, bats and others are being sold in exactly the same way they were before the coronavirus outbreak, according to Washington Examiner. Security guards are now attempting to stop people from taking photographs. China must be held accountable for their actions.

In China’s cruel and dangerous wild animal trade, millions of bats, civets, snakes, badgers, monkeys, and other animals face brutal torture and slaughter each year, putting humans at risk of diseases such as rabies and coronavirus (thought to have at originated at a wild animal market). These markets also often sell dogs and cats, who are stuffed into tiny cages, transported unbearably long distances and bludgeoned to death or burned alive.

Finally recognizing the severity of the situation, China has halted the trade and human consumption of wild animals — but now they must enforce this ban and permanently shut down all wild animal markets, including the use of wildlife in medicine. It is too difficult to discern which animals are used for food and which are used for medicine. As long as these loopholes exist, China’s wild animal trade will continue to flourish.

These innocent animals are subjected to agonizing suffering as they are snatched from their homes and sold to meat markets.

The horrendous wild animal trade is also a severe health threat to humans, and conservationists believe the only way to prevent future virus epidemics is to end this dangerous and unhealthy industry.

It’s time to end this cruelty once and for all, saving millions of animals’ precious lives and preventing future deadly outbreaks.

Sign this petition to urge Chinese Ambassador Cui Tiankai to call for a complete end to the wild animal trade in China, push for a ban on dog and cat meat consumption, and close the loopholes attached to using wild animals for medicine.