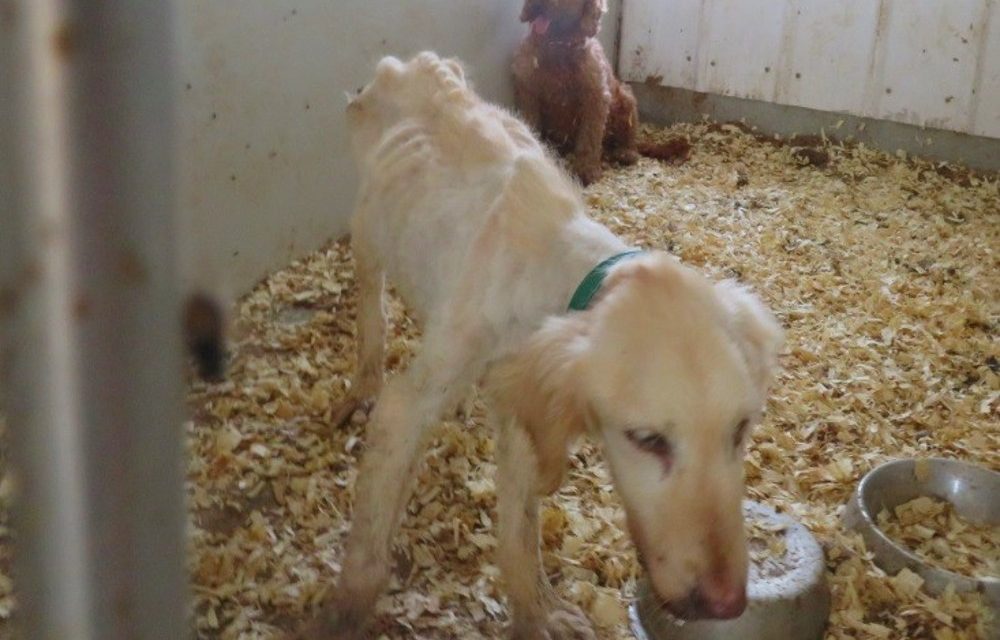 UPDATE (11/8/2022): Goldie’s Act, now assigned as HR 6100,  has been stuck in the Subcommittee on Livestock and Foreign Agriculture since Jan. 4. We’ll keep watching this case. —Lady Freethinker Staff

Goldie, an emaciated golden retriever whose ribs and spine showed through her fur, cowered in a horse stall, where she had been hidden to escape notice by authorities by an Iowan puppy mill breeder with repeat, serious violations.

Breeder Daniel Gingerich racked up more than 100 violations of the federal Animal Welfare Act (AWA) in the two years he operated business Maple Hill Puppies, including failing to provide animals with food, water, and medical care.

Inspectors with the U.S. Department of Agriculture (USDA)  reported dead and dying dogs on his properties. But they failed to take immediate enforcement action, conducting 18 visits over six months before they suspended his license, after the U.S. Department of Justice filed a civil lawsuit, according to KCCI.

The delay led countless innocent dogs to suffer and die – in violation of federal law. After the suspension, the Animal Rescue League of Iowa rescued 514 dogs from Gingerich’s property. While a federal judge has permanently revoked Gingerich’s license and ordered him to never again breed dogs, other dogs are suffering the same cruel fate – and state legislators have had enough.

Rep. Cindy Axne (IA-03), who said she was disgusted that USDA inspectors knew the more than 500 dogs in Gingerich’s custody were suffering but did nothing for months, has introduced new legislation that would force USDA inspectors to do their jobs.

Goldie’s Act, named for the retriever who had to be euthanized because of her condition, would require the USDA to report violations of the AWA, impose fines of up to $10,000, confiscate suffering animals, and give a copy of welfare violations to local and state authorities.

While the USDA already is supposed to be reporting violations, and already has the ability to enforce penalties for violations, Axne said the bill would help close legal loopholes that allow dog dealers to dodge accountability for abusive actions.

No dog deserves to suffer or die at the hands of a profit-making business that cares more about money than their quality of life. It’s time for Iowa to crack down on cruel breeders who openly flaunt animal welfare mandates.

Sign our petition asking Iowa legislators to support and quickly pass this life-saving legislation that is simply asking the USDA to do what they’re already supposed to be doing, and so save countless innocent dogs’ lives.