SIGN: Justice for Puppy with Leg Amputated Due to Severe Abuse

UPDATE (6/21/2021): Blitz has found a loving forever home with an adoring employee at the animal hospital that treated him for his severe wounds after police found the dog dumped near a strip mall in 2018.

Josh Yontz told Lady Freethinker he was working at Noah’s Westside Animal Hospital as an intensive care unit technician when Blitz arrived and was part of the team that cared every day for the dog during his weeks-long recovery following his leg amputation.

Yontz said he fell in love with the personable three-legged dog almost immediately.  He reached out to Every Dog Counts Rescue and asked to adopt Blitz; he was approved after submitting an application and passing a home visit. As soon as Blitz had recovered from his injuries, he went home with Yontz to become a beloved part of their family.

“He has been by my side ever sine and even comes to work with me everyday,” Yontz said.

When the family moved to California a year ago, Blitz went with them. The dog is now “living the sweet life,” Yontz said — lounging by the pool, going to the beach, and being best buddy to the family’s children.

“He loves the beach and lounging by the pool while my kids swim,” Yontz said. “As before, he comes to work with me every day to a beautiful animal hospital in Calabasas.”

An Indianapolis Metropolitan Police Department spokesperson said that their system could not pull up the case when provided with details covered in local news at the time. Lady Freethinker has put out a public records request to try to get any other information that might help us track down whether anyone was connected to this crime.

We want to thank the more than 27,000 people who signed our petition demanding justice for Blitz. We are overjoyed that he has found such a wonderful home where he can spend the rest of his days surrounded by love, laughter, and peace! 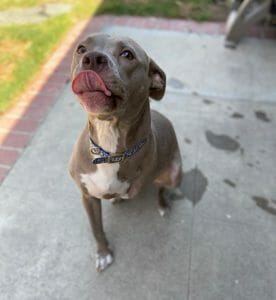 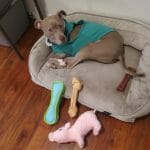 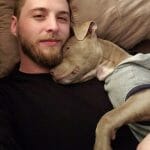 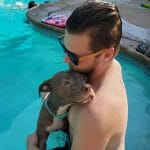 Recently in Indianapolis, a severely abused puppy with a broken leg and a prolapsed rectum was wrapped in a bag and heartlessly left for dead in the street. The crime photos — too graphic to show here — reveal a deep, bleeding wound in the upper leg as well as a red, extremely swollen anus.

Thankfully, someone found the puppy, who was rescued by the Indianapolis Metropolitan Police Department’s animal control team. But his mangled leg could not be saved, and vets were forced to amputate. He also required surgery to correct his rectum.

Because of the torture he endured, the puppy — now named Blitz — has a long road of recovery ahead of him, as his abuser still walks the streets.

The person responsible for this particularly gruesome act of cruelty poses an ongoing threat to humans and animals alike. It’s imperative to public safety that this criminal is caught and held accountable to the fullest extent of the law.

Sign this petition urging the Indianapolis Metropolitan Police Department to do everything in their power to identify and arrest the individual behind this sickening abuse.

Anyone with information about this crime is encouraged to call Crime Stoppers of Central Indiana at 317-262-TIPS (8477).