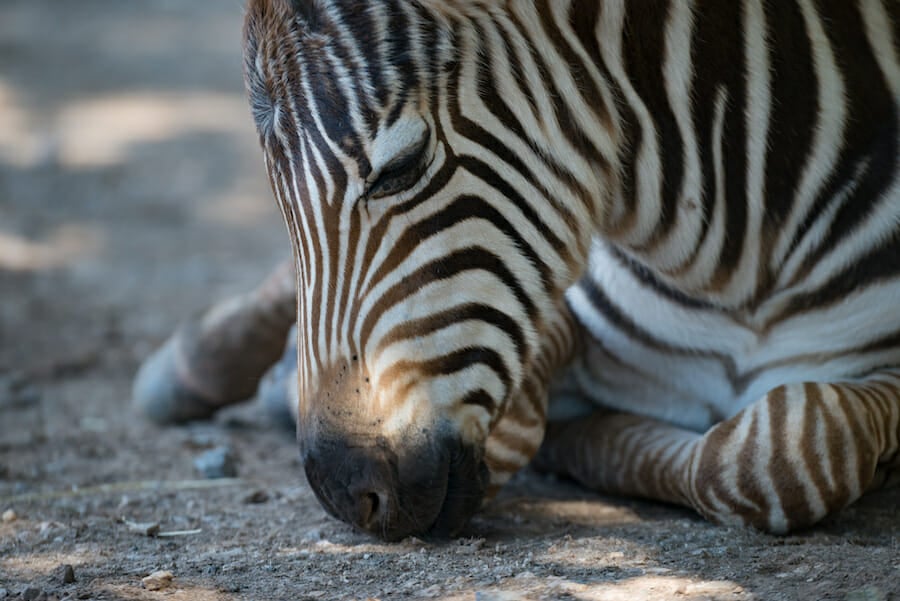 UPDATE (12/16/2021): Jerry Holly’s case is scheduled to go to trial on Jan. 6, 2023, with three animal cruelty charges filed, according to court records. Meanwhile, the two escaped zebras have been captured and returned to Jerry Holly,  according to The Washington Post. While we are glad that the zebras are safe, we are astounded that they would be returned to someone facing active charges of animal cruelty. We will continue to watch this case.

A zebra who escaped from an exotic farm with hundreds of documented animal welfare violations stayed missing for more than a month before his decomposing body was found in an illegal snare less than two feet away from the property.

The zebra likely struggled for days in the vicious trap before dying of dehydration on the private property neighboring the farm, as alleged in court documents.

Meanwhile, two other escaped zebras have been missing since Aug. 26, and investigators found another dead zebra at the farm after a news crew captured footage of the corpse from a helicopter, according to NPR.

Jerry Holly, of Upper Marlboro, Md., has been charged with three counts of animal cruelty for causing “unnecessary suffering or pain” to the three escaped zebras, according to court documents. He faces a maximum penalty of 90 days in prison and a fine of $1,000 under the charges, brought forth by the state attorney in Prince George’s County, Md.

This is a serious case, and Holly is not a first time offender.

He’s been cited numerous times by inspectors from the U.S. Department of Agriculture (USDA) for failing to provide adequate food, water, and veterinary care to animals and other offenses that total more than 100 violations of the AWA, as reported by NPR and as documented in publicly viewable inspection reports.

While Holly awaits his court proceedings, almost 40 other zebras remain on his property, with no immediate plans to remove them, according to a statement from the Department of Energy.

Holly must be held accountable for any needless suffering or deaths of the animals under his care — and prevented from causing future harm.  The remaining, living animals must not suffer the same sad fate as the “completely decomposed” zebra found by investigators.

Sign our petition urging Prince George’s County State Attorney Aisha N. Braveboy to prosecute Holly and the individual who put out the illegal snare trap to the fullest extent of the law.

We’re also asking the U.S. Department of Agriculture to thoroughly investigate conditions at Holly’s farm, to permanently revoke his license given the chronic and serious violations of the Animal Welfare Act if warranted, and to immediately remove the remaining animals from the property if their safety and well-being are jeopardized by current conditions.