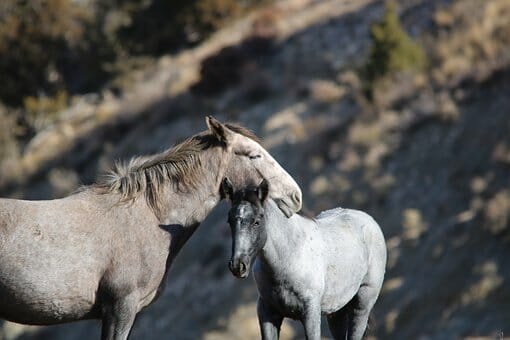 UPDATE (8/19/2021): Sen. Dianne Feinstein is calling for a thorough investigation into the Bureau of Land Management (BLM)’s Adoption Incentive Program, telling government leaders the announced changes are not enough.

​​“I believe more must be done in light of the disturbing allegations that some adopters have mistreated or illegally sold wild horses and burros, and respectfully urge BLM to conduct a full investigation of the matter and prevent such adopters from adopting again,” Feinstein wrote in an open letter to Interior Secretary Deb Haaland, as reported by the Associated Press.

Feinstein, who is a senior member of the Senate Appropriations Committee, is calling for an investigation into how many American wild horses have ended up in slaughterhouses via the BLM’s adoption program and also a re-evaluation of providing adopters with financial incentives to adopt. — Lady Freethinker Staff

The Bureau of Land Management (BLM) has announced plans to improve protections for wild horse adoptions after an exposé showed wild animals adopted for $1,000 through an incentive program were being sold to slaughter.

The federal agency announced it will start requiring additional compliance visits post adoption, with increased screening and scrutiny of potential adopters; increased warnings to sale barns about the risk of illegally selling wild horses and burros, including posting warning notices at 750 livestock sale facilities; inspecting all animals within six months of adoption, instead of the current 12 month period; and requiring veterinarians to certify all applications before adopters receive their $1,000 adoption incentive, according to The Associated Press.

This update follows significant concern over the program.

On June 2, more than 30 legislators sent a letter to Interior Secretary Deb Haaland demanding a thorough review of the Bureau of Land Management’s Adoption Incentive Program for wild horses and burros to ensure the iconic animals aren’t sent to slaughter, in violation of the agency’s adoption agreement.

Wild horses adopted through a federal program that pays $1,000 per adopted horse to supposedly loving new families have instead been sold to slaughterhouses by the adopters who vowed to protect them after they received their stipends, the New York Times reported.

The Bureau of Land Management (BLM) created the Adoption Incentive Program in 2019 to find private homes for wild horses rounded up during gather operations in areas where the number of wild horses exceeds the agency’s allowances.

Under the federal program, adopters receive $1,000 per horse to adopt and care for a wild horse. They have to check a box on the application form saying they will not sell the horses to slaughter. The agency disperses the funds after 12 months and once the horse is titled to the new guardian.   The program aims to find good homes for the animals and bills itself as a chance to  care for “a part of America’s heritage,” according to the BLM’s website.

But some adopters have taken advantage of this financial incentive and profited further by sending these beautiful and intelligent animals to their deaths. As soon as the 12 months are up and the money hits their bank accounts, they have sold the horses to auction houses for slaughter.

Often, these horses show up at auction emaciated and diseased, clearly lacking the humane treatment their new guardians promised, according to the New York Times.

Records obtained by the New York Times also raise serious questions about the agency’s choice to adopt horses out to individuals with histories involving horse slaughter. The BLM allowed a man to adopt who had previously served time in prison for kidnapping and beating two men during a horse-slaughter deal gone bad.

Another adopter, Gary Kidd, decided to take as many horses as he could– receiving at least $20,000 of federal money and agreeing to the BLM’s condition that he would not resell the horses for slaughter. Kidd told the New York Times that his horses were allegedly living on his farm. But in reality, the horses ended up at a Texas livestock auction frequented by slaughterhouse brokers known as “kill buyers,” according to the New York Times.

While the BLM requires adopters to fill out a form with a checkbox that states they will not sell the horses to any slaughterhouses, the agency is not taking responsibility for those adopters who do.  A BLM spokesperson said the agency has no way to enforce the rule once a horse has been titled, and that adopters who sell horses to slaughterhouses are free to adopt and get paid again.

Sign our petition urging the Bureau of Land Management to adopt these new provisions to their adoption agreement to prevent America’s wild horses from being slaughtered for profit.